Here’s a fun post about incorrect word usage: 9 grammatical mistakes you need to stop making before I throw live scorpions at you.*

Yes yes I know, these posts are a dime a dozen, but a) I totally agree with most of these; and b) You couldn’t come up with ten?* and c) scorpions are cool! The tigers of the arthropod world! Though if someone throws one at you, wouldn’t it just bounce off harmlessly? Still, it’s an eye-catching phrase. 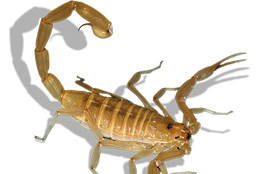 I found one of those on the wall of my house a few years ago. Not too poisonous, but startling! I’d had no idea there were any scorpions in MO at all. I am afraid I killed this one before looking it up and finding out it really is not that dangerous even to little dogs like mine. Next time I will just throw it outside. It is a striped tree scorpion, incidentally, and it will sting and the sting will hurt, so this doesn’t mean you should just pick one up casually, but you should think of it like a wasp, not a rattlesnake.

Anyway, so what are these nine* dire diction bad boys?

OH YES. Since I had no choice but to learn the difference and how to use these, I naturally feel everyone else should do it right, too. (If you’re writing in science, you get to use both of these A LOT because there are no good synonyms, so you are forced to learn the correct usage.)

2. Myself. “My treasurer and myself agree with you completely about general operating funds.”

Another good one! That drives me batty! Surely it’s not just me. Surely many other grammarians out there hear this like fingernails down a chalkboard — myself without a referent. Ugh!

3. Apostrophes. “I forgot my flask, so Janice let me drink from her’s.” Or, “There are leftover donut’s in the conference room, y’all!”

Those examples are from the post. I . . . don’t *think* I have ever seen the former? Or maybe I blocked it. Examples like the latter are EVERYWHERE. Is apostrophe use really that difficult? I don’t think so.

Cheating to break this one out of #3 and use it as a separate example of grammar badness. But it certainly is super-common. (Don’t tell anyone, but if I’m tired enough, and typing with just my fingers and not my brain, I can actually make this mistake myself. Unbelievable, but true.)

5. I resonate with. I’ve been seeing this one more often lately. Instead of saying, “Your post on dating in the nonprofit sector resonates with me,” a colleague says, “I resonate with your post…”

I had to read the example given to understand what this one meant. I’m not sure I’ve heard anybody say this? I agree that it makes me think you are vibrating.

This sounds a little silly, I grant, but it’s not a usage that particularly outrages my delicate sensibilities.

Yeah, I had a teacher tell me this is not a real word lo these many years ago, and that took care of that. Now I’m allergic to this usage.

9. And the funniest entry:

Service. OK, this, like “utilize,” is not a grammar mistake. It’s more about word choice. But please pay careful attention, because we in the nonprofit sector use this word a lot. And when it is used as a noun, it’s fine. When it’s used as a verb, though, it opens a hole in the fabric of space and time, and the Four Horsemen of the Apocalypse unleash themselves upon the earth. Watch: “We service low-income individuals through our employment programs.” NoooOOOooOOOooo!!! If you don’t know why that is wrong, please ask a friend.

Yeah, it doesn’t really annoy me, if only because I never hear anybody use the word “comprise” or “comprises.” I mean, except me. I do now and then. Without the of.

Interesting! I’m not sure I ever really noticed this shift. Obviously it doesn’t snag my attention when people use it in either sense.

12. Myriad. “We have a myriad of options for venues for next year’s gala.”

Yeah, just “myriad,” no “of” — I know that, but really, do people say “myriad” enough to annoy you with the “myriad of” phrase?

* The post SAID nine. The title of the post really is “9 grammatical mistakes you need to stop making before I throw live scorpions at you.” I counted the items twice when I got to ten, and frankly, it IS funny that a post nitpicking grammar and word choice happens to screw up counting from one to twelve. I hope I didn’t happen to make any grammatical mistakes in this post right hear! I mean “here.” I think errors are especially likely to slither into posts of this kind, which no doubt serves the poster right.

Meanwhile, when I thought there were only nine items, I thought of another which annoys me way more than anything you could do with “momentarily:”

13. “Orientate.” Stop it stop it stop it. There is no such word. It gets on my last nerve when people say this. Stop with the extra syllable!