Okay, so First Frost was a bit of a surprise, since I hadn’t read the book description. 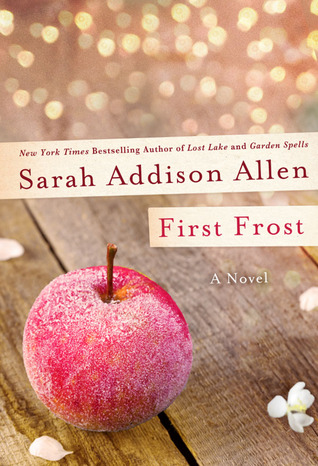 I’d been re-reading Sarah Addison Allen’s books recently, ran out, and finally picked up First Frost without knowing a thing about it. Turns out it’s a direct sequel to Garden Spells. I had no idea! I really had been thinking that I should have put Allen’s books on The Ultimate Standalone Fantasy List, and here it turns out that she’s written a direct sequel. Not that the first book can’t be read in isolation, but it’s not a standalone I was defining the term for the purposes of the list.

First Frost is a perfectly good book, better imo than Lost Lake. I don’t feel the Waverly family really needed closure; they got that in the first book; but okay, fine. This sequel takes place ten years later, so Bay is a teenager. She’s having a tough time — hint to teenagers everywhere: never tell a boy that you know you belong in his life. It will only complicate your high school years. Bay’s Waverly gift, you may remember, is to know where things (and people) are supposed to be. Getting things (and of course people) to actually *be* where they ought to be is not quite so simple.

Thankfully both Claire and Sidney are still happily married (if they weren’t, that would sure ruin the first book, wouldn’t it?). They have other issues that are getting in the way of happiness. Those are what need to be resolved this time around. I did think both resolutions were essentially obvious from the start, though of course it’s the details of getting there that make the story enjoyable.

Also, there is a con man out to gouge Claire. Spoiler: He doesn’t manage to. He’s an interesting character, though. Allen’s good, at always, at drawing in the secondary characters. Including the apple tree, which is undeniably a character in its own right as well. Her books are always about relationships — family relationships and friendships as much as romances — and practically every named character seems to have their own character arc, even though the books are not long.

So . . . how would you actually rank Allen’s books, if you’ve read them all? I know Garden Spells is a big favorite. However, for me, I think they go in this order:

The Girl Who Chased the Moon

Added note: As a peculiar little tidbit, check out this link at Goodreads, which says that Sarah Addison Allen’s new Untitled Book will be released in 2050. Ooookay. A little extreme in the lead-time there, but nothing like getting in early with these announcements. Or something.