So, I’m moving along in a quite satisfactory way with bringing out Black Dog. Spanish is all fixed up, “Alright” is now “All right” like God intended, I’ve rejiggered the chapter headings so conversion processes can tell they are there, all that kind of thing.

Fiddling with the margins to get a version Create Space liked was a pain, so I’m glad I’ve got that done, whew. I just today sent it for review by the Create Space people. I trust they will give it a thumbs up. I will then get a review copy, glance at it, nod (I trust), and go ahead. By then I should be ready to throw the ebook versions out into the world as well; ebook stuff takes far less time.

And of course I needed a new cover! Here it is — I hope you all like it. I think it’s quite good: 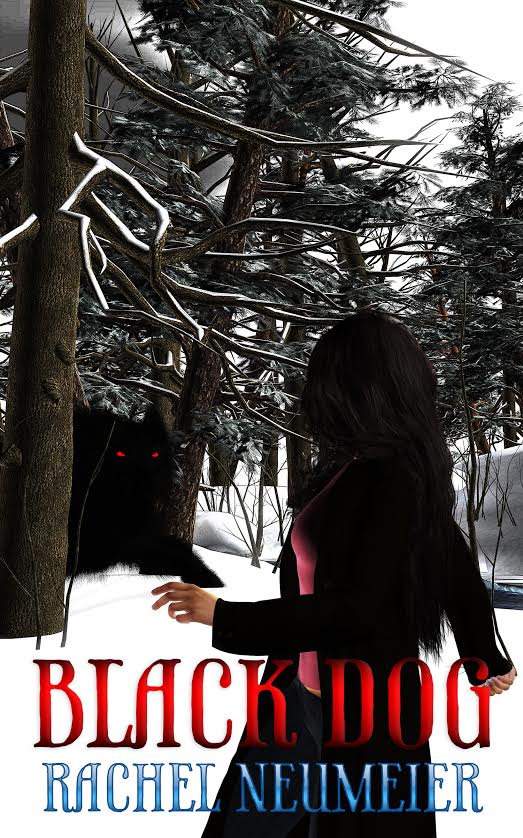 For simplicity’s sake, just Natividad. I realize that gives short shrift to her brothers. Miguel is so important in SHADOW TWIN, maybe I will let him have the cover for that one.

We can assume the black dog here is Ezekiel, though of course he was really in human form when Natividad first saw him. I actually do not intend ever to show Ezekiel — I want readers to be able to imagine him for themselves. And I rather like keeping Natividad turned away as well. I like her pose here. I asked for a little pink to help draw the reader’s eye, and I think the color of the title serves that purpose, too.

Anyway, here it is. The back is more snowy woods and a blurb, which I tightened up a LOT. I think the description at Amazon is way too wordy. Here’s the blurb I came up with:

In a world where a half-hidden war has finally revealed to ordinary humans the supernatural creatures that surround them, safety is hard to find for a girl like Natividad.

Born Pure, one of the rare girls able to wield protective magic against demonic forces, Natividad and her brothers are on their own and on the run, with terrible memories and terrible enemies behind them. The only possible shelter might be found with their father’s kin, the infamous black dogs of Dimilioc . . . if they can win acceptance. But when their enemies track them to their new home, neither Natividad nor her brothers nor Dimilioc itself may survive . . .

Far less detail about the backstory, hopefully evocative and inviting for readers who enjoy UF/Paranormal.

I expect everything to go live pretty soon, the ebooks probably by the end of the month, the print version hopefully not much later than that.

Then on to the second set of stories! One of which is not finished yet. I am sooooo nearly done with the space opera; I doubt I’ll finish it today, but maybe tomorrow or perhaps Friday. Then a few days to revise it, then I will *finally* finish that Black Dog short story. I would like to bring out that collection at the end of August, plus a print version of all the short stories combined.

So that’s where we are with the Black Dog series right now! I firmly intend to write the rest of Book 3: SHADOW TWIN before January. I won’t say it’s impossible for that plan to be derailed, but I do hope to keep to that schedule. I’d like to bring the book out toward the end of January, which would be midway between the release of THE MOUNTAIN OF KEPT MEMORY in November 2016 and THE WHITE ROAD OF THE MOON in March 2017. I estimate I have about 1/4 to 1/3 of the book written so far. Should be doable!