So, let me share with you some of the most recent acquisitions to my TBR pile. Here I’m not distinguishing between full books and samples, just opening up twelve of the newest books to arrive on my Kindle / at my house. They’re certainly stacking up, I must say. I have 38 samples now, plus 146 books on the virtual TBR pile, plus three and a half shelves of physical books on the real TBR shelves (there are only three shelves; the rest of those are piled on the floor). Who knows how long it’ll be until I finally get to any particular title?

Still, let’s take a look at them: 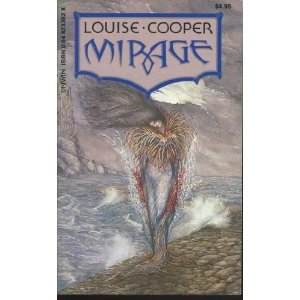 Are you awake, in the dark and the silence?

Do you have eyes to see, and ears to hear? Do you have hands to reach out and clutch at the emptiness?

Can you feel? Can you know hate, loneliness, love, despair?

Yes: you are alive. You can sense blood trickling through your veins, count the muffled beats of your heart; and you know that, after what might have been centuries of waiting, sleeping without dreams, without memory or identity, you exist. And although as yet there is nothing for your awakening senses to grasp, something is approaching you It draws nearer, like a half-recalled nightmare, and it pulls and calls, demanding that the call be heeded.

Evocative! Does the second person work for you here? That continues for about a page, so you can consider this a prologue, though it isn’t set aside with that word – probably wise, since many readers think they’re allergic to prologues and won’t touch them. 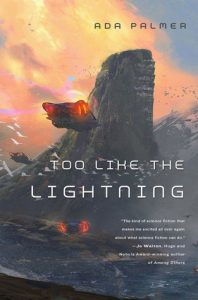 You will criticize me, reader, for writing in a style six hundred years removed from the events I describe, but you came to me for explanation of those days of transformation which left your world the world lit is, and since it was the philosophy of the Eighteenth Century, heavy with optimism and ambition, whose abrupt revival birthed the recent revolution, so it is only in the language of the Enlightenment, rich with opinion and sentiment, that those days can be described. You must forgive me my ‘thee’s and thou’s and ‘he’s and ‘she’s, my lack of modern words and modern objectivity. It will be hard at first, but whether you are my contemporary stil awed by the new order, or a historian gazing back at my Twenty-Fifth Century as remotely as I gaze back on the Eighteenth, you will find yourself more fluent in the language of the past than you imagined; we all are.

Daring! That first sentence is 82 words long. I’ve seen various reviewers just raving about this recently released title, and I’m betting it’s on a lot of award shortlists next year.

3. THE SPYMASTER’S LADY by Joanna Bourne

She was willing to die, of course, but she had not planned to do it so soon, or in such a prolonged and uncomfortable fashion, or at the hands of her own countrymen.

Catchy! Is there anyone who wouldn’t read the second sentence? Yes? Anybody? I didn’t think so.

4. EVERY HEART A DOORWAY by Seanan MacGuire 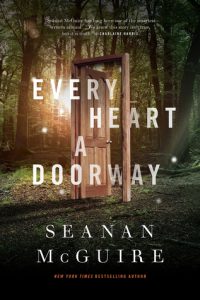 The girls were never present for the entrance interviews. Only their parents, their guardians, their confused siblings, who wanted so much to help them but didn’t know how. It would have been too hard on the prospective students to sit there and listen as the people they loved most in all the world – all this world, at least – dismissed their memories as delusions, their experiences as fantasy, their lives as some intractable illness.

Promising! Everyone seems to love this book, so, I picked it up when there was a Kindle daily deal or some such sale. I admit with a little trepidation. I loved FEED, but I had major reservations concerning various plausibility issue with the plotting. I thoroughly disliked DISCOUNT ARMAGEDDON, though probably part of that was because I listened to the audiobook and audio format magnifies flaws out of all proportion, imo. Well, we’ll see. Also, let me add that this is much shorter than I expected, either a novella or close, just FYI.

5. ROSES AND ROT by Kat Howard 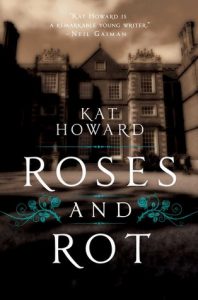 Marin sat on my bed, next to my half-packed suitcase. “I wish you weren’t leaving, Imogen.”

I couldn’t say the same, not and answer honestly. “I’d be leaving for college in two years anyway.”

“Yes, but that’s two years from now.” She picked through my t-shirts, separated one with a rose embroidered in tattered ribbon on its front from the pile. “This is mine, by the way.”

“Sorry, forgot,” I said. I took her hand, rubbed my thumb over her fading scars. Mine hadn’t healed as well, which had been the point.

Slow. Honestly, there’s nothing in this that particularly makes me want to turn the page. However, I would certainly go on with the story because many people seem to just love this book.

6. A NET OF DAWN AND BONES by C Chancy 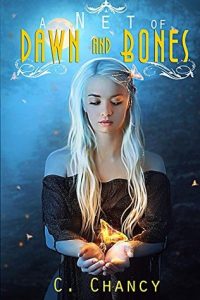 Darkness, illumined only by the seeping red glow of magma cracks below, the shimmer of ice falling over black cliffs to rumble and hiss into the spreading lava plain. The creak of rock and ice to steam and the wailing souls caught between them wove a net of agony that covered the world, shrouding one small cove of silence.

“I cannot believe you still pray, after all these years.”

“… Et Spiritus Sancti, amen.” The spirit in the form of a young woman glanced up, certain of what she would see. And therefore worried.

Intriguing! That net of agony stuff is a bit off-putting. But given our recent discussions about religion in SFF, I would definitely go on.

7. WINGS OF FIRE by Tui Sutherland 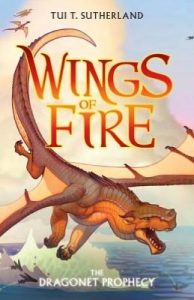 A dragon was trying to hide in the storm.

Lightning flickered across the dark clouds. Hvitur clutched his fragile cargo closer. If he could make it over the mountains, he’d be safe. He’d escaped the sky dragons’ palace unseen. And the secret cave was so close . . .

But his theft had not been as stealthy as he’d thought, and eyes as black as obsidian were already tracking him from below.

Dragons! This is a middle-grade story, part of a series, featuring dragons as the characters (no humans, just dragons). Quite a lot of MG fiction reads too young for me, but I thought I’d give this a try because, you know, dragons. I will say, it’s got great drawings. MG authors certainly do get all the cool illustrations. 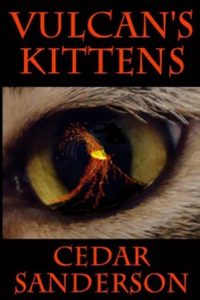 Linnaea looked out the tiny window of the tiny plane and marveled at the mountains below. They had flown out of the Boise airport just a half hour before, but already she could see few signs of civilization. Her trip had started that morning in the Seattle airport. She leaned her head against the cool window glass and relived the earlier scene with her mother.

Another slower start. After this, we get at least several paragraphs of backstory dropped on us. Well, we’ll see.

9. A LONG TIME UNTIL NOW by Michael Z Williamson 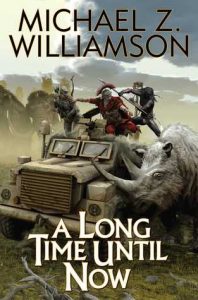 First Lieutenant Sean Elliott sat sweating in an MRAP in the ass end of Afghanistan, waiting for the convoy to roll.

Time travel! I know you can’t tell from this sentence, but I got this sample because I saw a description someplace – something about how military units from all kinds of times and places wind up back in . . . the Pleistocene? I don’t remember; some earlier epoch, anyway. That just sounds like it might be a whole lot of fun. I’ve never read anything by Williamson as far as I remember; I must say, the sample function is super-handy for risk-free browsing of titles that catch your eye. 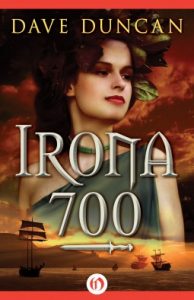 Crammed in, shoulder to shoulder around the tiny table, her brother fed like starving sharks and did not meet her eye. Her father continued to chew, staring at the gap in the wall above her where a rotten plank had fallen out. He kept promising to mend it.

“We’d just walk until our feet hurt and then have to walk all the way back again!” This time Irona glanced over to the bed, where her mother sat, nursing the latest baby and surrounded by Irona’s sisters, all waiting their turn at the food.

Gritty. Not a setting I much care for, but then I expect Irona is shortly going to be leaving this difficult family situation. 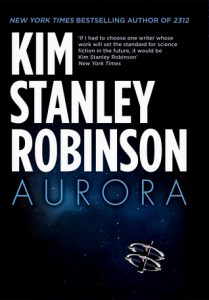 Freya and her father go sailing. Their new home is in an apartment building that overlooks a dock on the bay at the west end of Long Pond. The dock has a bunch of little sailboats people can take out, and an onshore wind blows hard almost every afternoon. “That must be why they call this town the Fetch,” Badim says as they walk down to take out one of these boats. “We always catch the brunt of the afternoon wind over the lake.”

So after they’ve checked out a boat, they have to push it straight off the side of the dock into the win, Badim jumping in at the last moment, hauling the sail tight until the boat tilts, then aiming it toward the little corniche around the curve of the lakeshore.

Startling! SF, really? This is a surprising way to start this novel. Also, present tense? That’s kind of a departure for KSR, isn’t it? Well, it’s interesting, though I wouldn’t have expected it. 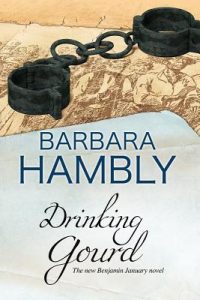 “Well now, Mr Tambo,” drawled the Interlocutor, as the row of black-painted white men cased their spirited rendition of ‘The Bee-Gum Tree’ on banjos and bones and the little backing orchestra – a dark tableau against the painted backdrop, in the mild light that filtered through the canvas walls of the show tent – softened to a gentle plunking like the beat of a sleeping heart. “How are you at mathematics?”

Unexpected! Anybody see that line about mathematics coming? Actually, the first lines of this particular book don’t matter much to me; this is the latest Benjamin January novel and so of course I’ll be reading it soon. I don’t like every single installment in this series equally, but overall it’s my favorite mystery series out there, so I’m really pleased Hambly is still going on with it. This one sounds promising if you read the back cover copy. I had to google “drinking gourd underground railroad” to get the title, though. Did any of you get the reference without google?

11 thoughts on “A first look at a dozen new arrivals”