Okay, now, listen. I went in knowing, just *knowing* that I was either going to put Ancillary Mercy or Uprooted in the top spot, the other one second. I hadn’t read the other three nominees at the time. I was happy to try The Fifth Season, unhappy about being forced to try Seveneves, and okay if not enthusiastic with trying The Aeronaut’s Windlass.

That’s how I started out.

I have seldom been more surprised in my life as to find myself putting Seveneves in the top spot. 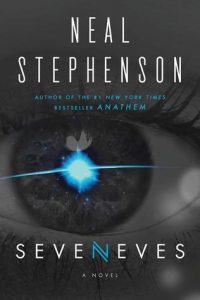 I read part of Snowcrash a long time ago. A smallish part, I believe, but I don’t remember for sure. I read The Diamond Age, but without much enthusiasm. Then I gave up on Stevenson and haven’t touched a book of his since. And then to my astonishment I loved Seveneves. Even though I think of myself as a character reader, basically, and Seveneves involves almost no actual character development as such; mostly the characters are pretty much the same at the end as they were at the beginning. Still, many of the characters have some depth and I liked them; they were just very static. (This is more true of part one, but imo still true in part two.)

Where Seveneves fails: honestly, at nearly 900 pages, it was not long enough. I would have liked a whole middle section, perhaps stretching from setting down in the Cleft to the new fragile population becoming fairly secure. And then break the story into a trilogy, of course. It’s two books jammed together right now; separation would probably improve both and adding a middle volume would have worked for me.

I skimmed every section where Julia was a major player. I hated her. You’re supposed to hate her, of course. Good job with that. I guess you can list Julia and her role as both a good point and a bad point, but if she’d been any more important I would have liked the book a lot less.

Plus, I could not believe how incompetent people were in dealing with Julia, and later with Aida. Otherwise competent people just completely failed to cope, so much so that it was hard to accept. Also, I have to point out, if you can artificially increase heterozygosity, what difference does it make if you have five eves instead of seven? Wow, a lot of complications and two wars would have been prevented if someone had just decided to put Julia and Aida out an airlock, or for that matter simply not to give them equal rights to tweak their children.

Okay, other than that, the science is iffy in places (I mean the biology; I would hardly attempt to criticize the orbital mechanics). I don’t want to say much about it because spoilers would be inevitable.

Where Seveneves succeeds: What a great book to argue about! This is the kind of story where, when you see a plot hole, you figure out a way to paper it over and then argue with friends about whether you’ve plausibly solved the problem. Also the kind of story where everyone can get together and rant about Julia and what they would have done to deal with her. Also the kind where you argue about the events in part two and whether any of that can be made to work and whether it would be worth going through part one to build the society we see in part two.

Also, the book has great scope and ambition, yet the story itself is extremely straightforward, especially in part one. It’s very easy to understand and connect to, which is one reason the story is so compelling, I think. You get totally drawn in. You root for the good guys and boo the (few) bad guys and very likely learn something about orbital mechanics. In part two, the setting is entirely different and far more socially complex, the plot is not quite so straightforward, the characters are not quite as simple. Part two is predictable in some ways, but it contains a few startling plot twists; it’s a more ambitious book but less of a page-turner. Overall a very different book, but one I enjoyed quite a bit.

Although the characters don’t change much in either half of the book, some lacking anything resembling a character arc, they are actually well drawn and easy to connect to. Single best touch: Ivy and Dinah being friends, even though they are not seen that way by the popular imagination. I enjoyed the implicit comment about how women are viewed as intrinsic rivals versus how a female friendship can actually work.

Why I’m putting Seveneves first: What I want in a Hugo winner is something out of the ordinary, preferably a book that attempts something ambitious and ideally pulls it off. What I also prefer: a book I genuinely enjoyed reading. What I like to see on top of that: a book that’s thought provoking and fun to argue about. Seveneves , despite its faults, delivers on all criteria.

So my final list for novels is as follows:

2. Ancillary Mercy. I went back and forth on this a lot, but Leckie really pulled off a great ending to a wonderful trilogy. Even though she already picked up a Hugo for the first book, I’m fine with the idea of her taking home a second rocket for the third.

3. Uprooted. I re-read a good bit of this one while I was making up my mind. It’s so very different from the two above that it’s like comparing apples to . . . um . . . not oranges . . . perhaps to chocolate cupcakes. Where Seveneves has scope, Uprooted offers a much smaller, more intimate story from a single point of view. It’s quite wonderful. But first, I have a slight preference for SF rather than fantasy for the Hugo (not that important), and second, honestly, I just do not find the ending all that believable. On a second reading, I still feel the ending is too easy and pat given the extreme creepy horribleness of the enchanted forest through most of the rest of the book.

4. Fifth Season. I loathed the main character, Essun. When she killed the townsman who was actually trying to help her — Rask — on page 58, and went on to kill everyone in the town, I quit. I am sorry for Essun’s personal tragedy, but there is absolutely no way that works for me. I can see this book is ambitious. I can see it is well written. None of that could possibly compel me to go on with it. Triple ugh with a cherry on top, and I am going to re-read The Killing Moon and The Shadowed Sun to take the taste out of my mouth.

5. The Aeronaut’s Windlass. I don’t really think there was anything special about this perfectly acceptable adventure story. Five protagonists are a lot for me, especially when none of strike me personally as particularly interesting. No, wait, I did like the etherialists or whatever they were called. Even so, when I reached the end of the sample included in the Hugo voters packet, I didn’t feel any particular impulse to go on with it. Also, I am just so over talking cats. Sorry. If you’re into talking cats, hey, this story is probably a good one to try.

To recap the other Hugo categories:

5 thoughts on “Hugo Voting: at last, the novels”