My goodness, what a lot of material to look at. And several of the entries are so impressive. I don’t like everything about any nominee; I don’t dislike everything about every nominee. Of course, that’s how it’s going to be if each nominee offers several stories for consideration — and most offer either a LOT of stories or multiple stories plus essays, reviews, and poems. I had a really hard time with these, I’m not kidding. It’s possible I might still change my mind about the order I put these in, especially if I have time to read more stories and essays, but here’s how I’m leaning and I feel the nominees are fairly likely to stay in this order:

1. Uncanny. There were so many well-known authors who contributed to this sample issue: Cat Valente, Kowal, Bear, E Lily Yu. This issue included both “Folding Beijing” and “Wooden Feathers,” and while I didn’t really like the former, you know how much I loved the latter. In addition, “In Libres” by Bear is a really fun story. I didn’t read the others, but I might yet if I have time. I wasn’t nearly so impressed with all the essays, but some were good and the stories seemed top-notch.

2. Strange Horizons. The sample issue offered three stories, three interviews, two reviews, two essays, and six poems. Some really well-known writers are represented, such as Jane Yolan, who had a poem in this issue (which I didn’t really like, but there you go). The story “The Game of Smash and Recovery” by Kelly Link is top-notch, if a bit horrifying. I was not very into the reviews or essays, which seemed to possibly be trying too hard to be deep, at the expense of clarity. I do like the mix of essays and stories and other things, though.

3. Daily SF. Wow, very impressive, delivering a story most days in most months. Definitely an A for effort. No way I’ll be reading enough stories to make any kind of judgment about the overall quality, but really, wow.

4. Beneath Ceaseless Skies – nothing but stories, and not a great number of those. I read two of them and they were both well-written and good.

5. Sci Phi Journal – I gather this is supposed to be kind of an intersection of SF and philosophy; the sample issue offered stories and essays in pairs. To me it seemed like the authors were trying to address big ideas but often in rather facile essays. The stories I read were not that great, though of course I like the ghost dog story.

1. Larry Rostant – he’s got a lot of good book covers, but wow does he like black. Very grimdarky kind of images, mostly. But not entirely, because there was one book by Kowal, let’s see if I can find it . . . here it is: 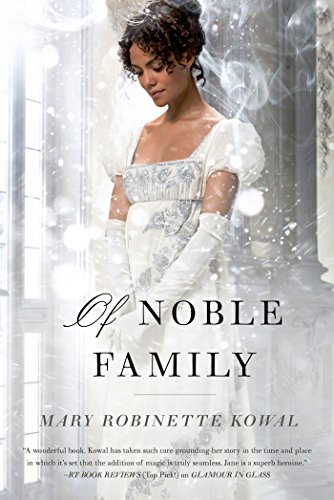 Isn’t that lovely? So Rostant’s range does expand out of grimdark sometimes. Plus, I prefer to look at book covers when sorting out artists for the Hugo. To me, book covers seem like kind of the point of the category.

2. Michal Karcz – I really liked a lot of his work. Which in general involves a small figure in a desolate landscape. There seem to be lots of post-apocalyptic scenes, like so: 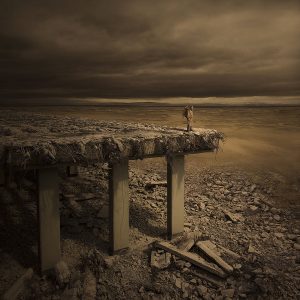 These are so well done and evocative. But they are also rather unrelentingly grim, even more so than Rostant’s covers. This is one artist I think I would have liked better if he’d included fewer works in the Hugo voters packet rather than more. Even though I liked a lot of his work, some a great deal, halfway through I was like: GRIM GRIM GRIM MY GOD MAN CAN’T YOU EVER LIGHTEN UP?

3. Larry Elmore. Now, Elmore didn’t include anything in the packet, but his work is super easy to find online and there is so much of it. His style doesn’t really appeal to me and I must say, the “pinups for the teenage boys” thing makes me roll my eyes. Every now and then he puts actual clothing on his buxom women, though. Here’s a typical example: 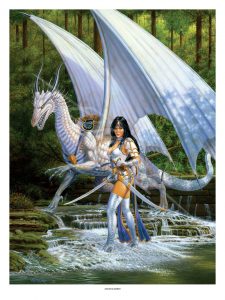 Larry Elmore could switch places with the nominee below; I probably won’t decide until the last second when I’m actually entering votes — probably next week.

4. Lars Braad Anderson included many fewer works in the packet, including three boring (to me) spaceship book covers plus a really nice photographic-looking waterwheel winter scene. Here it is: 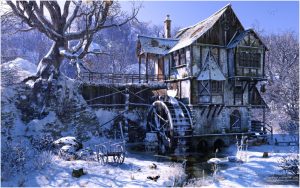 That’s beautiful, isn’t it? Looks like Anderson has lots of prints for sale, including this one; if you google his name and “gallery” it pops right up. The spaceships are completely boring to me, though. I realize there are a good many generic spaceship covers on SF books and I really do not even glance at the cover at all in those cases. That’s just me, obviously, but there it is.

5. Abigail Lawson. She has one style, which is rather cartoony; and a quite limited black/white/red palette. She doesn’t seem to do book covers at all, but perhaps some kind of comic or web comic? She doesn’t fit my idea of what this category is for, but I don’t like to use No Award, so I’ll probably just put her last. 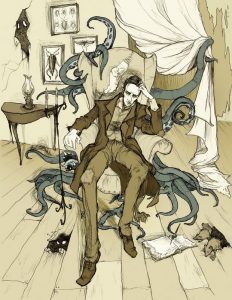