Here at tor.com, Joe Zieja cheerfully announces that he’s going to take a stab at summarizing five books based solely on their covers and titles. That’s a lot like people-watching at an airport or something and making up stories about the people you see, isn’t it? Except possibly funnier. Definitely no more likely to be accurate.

The Grace of Kings by Ken Liu 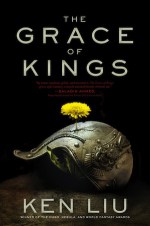 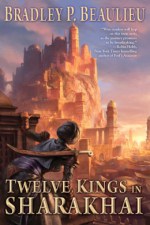 Signal to Noise by Silvia Moreno-Garcia

And The Traitor Baru Cormorant by Seth Dickinson — ooh, great choice, that title is sure suggestive. Not necessarily in a good way; this particular title is a turn off for me. Let’s see what Zieja guesses about this book given the cover: 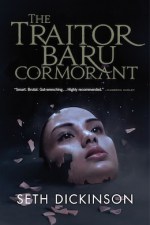 And here we go: “In this incredible book by Mr. Dickenson, who is, if you haven’t decoded this yet, Charles Dickens’ SON (DickenSON—get it?) we follow a blind mime through a passionate journey to reclaim the lost porcelain doll of his childhood. Only, since this is a fantasy novel, the porcelain doll is actually a magical familiar. The blind mime has been a wizard since birth, but never knew about it because he was raised by a baru—an extinct Australian crocodile—and a cormorant, which sort of also explains the mime thing. Since animals can’t talk. Right?”

THE TRAITOR BARU CORMORANT is an epic geopolitical fantasy about one woman’s mission to tear down an empire by learning how to rule it.

Tomorrow, on the beach, Baru Cormorant will look up from the sand of her home and see red sails on the horizon.

The Empire of Masks is coming, armed with coin and ink, doctrine and compass, soap and lies. They’ll conquer Baru’s island, rewrite her culture, criminalize her customs, and dispose of one of her fathers. But Baru is patient. She’ll swallow her hate, prove her talent, and join the Masquerade. She will learn the secrets of empire. She’ll be exactly what they need. And she’ll claw her way high enough up the rungs of power to set her people free.

Well, that doesn’t sound like a great book for me, especially with the creepy broken-doll cover.

Okay, of the five books here: I like the cover of Twelve Kings best. Here’s a post about that cover:

Paquette is one of my favourite artist, particularly for his work on Magic: The Gathering, and produces some of the best landscapes and cityscapes in the business. I also love that Çeda is front-and-centre on the cover, but doesn’t succumb to the traditional tropes that cover artists use to cue readers to her gender. She’s feminine, but not over-sexualized, and that sword looks like it can do some damage (though, Çeda’s no chump with just her fists!)

Actually, at the smaller size at which I first saw this cover, I didn’t realize the figure was a woman. Well, at the larger size, it’s obvious. I definitely prefer ambiguity to little bikini outfits.