Okay, so, all of you who told me I would love The Steerswoman, you were all perfectly correct! I’m grateful to you all for recommending it. 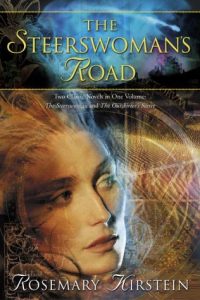 The characters: Well-drawn. Rowan, Bel, and Willam are all quite appealing in their different ways. Rowan’s observation skills and general perceptiveness are beautifully handled throughout, and believable, none of that too-good-to-be-true Sherlock Holmes magic. The whole concept of the steerswomen was delightful, and that, too, was handled in a believable way – pretty tricky for such an idealized lifestyle. I loved the bit where all the steerswomen (and steersmen) gave us some insight about how they look at the world while everyone worked on coming up with a disguise for Rowan. Look at this woman: what story would you believe about her?

I’m not always a fan of the barbarian swordsman type – in this case swordswoman – but I enjoyed Bel and the way her casual attitude toward killing people merged seamlessly with the her general good cheer. And she’s a good foil for Rowan, as her general ignorance of the mainstream culture provides a useful way to seamlessly explain important details.

And I admit to being particularly charmed by Will. There’s something about his fourteen-year-old earnest goodheartedness combined with a natural bent toward figuring things out. Which leads me to . . .

The scientific method in fantasy! Whoa, that’s so different! But here’s Will, changing just one thing at a time as he figures out how to make really quite powerful explosives. Go, Will! He would get along *so well* with Tehre from The Land of Burning Sands, wouldn’t he? Shoot, the two of them together would probably develop quite a theory of natural science, possibly before Will was old enough to shave.

Will might be thinking of his explosives as magic, but his attitude is all science. I was sure we would get a chance to see him use his “charms” sometime in the book, and wow, did we ever. Boom! No wonder he developed such careful methods of handling his pack. And of course Will’s explosives have to raise the question of what exactly magic *is* in this world – is it *all* science, really? It’s hard to see those little fire dragon things as anything based on science, so maybe there’s real magic as well as interesting secret technology and undiscovered science? I look forward to finding out.

We get a lot more of the science and – even better – the scientific mindset from Rowan. I loved her carefully drawing precise graphs as she figured out that in theory it might be possible to throw something so hard it would never fall back to earth! Wow. Next thing you know she’ll take over from Isaac Newton, describe the laws of planetary motion, and invent Calculus.

The world: So, about those laws of planetary motion . . . I wonder what happened to the moon? No moon! It disappeared ages ago. What a great detail to work so casually into conversation. Also, if you’d read this book, did you notice that stuff about green grass as opposed to red grass and black grass – and special goats that can eat the inedible kinds of grass, thus making life possible in marginal regions? It’s so cool the way the habitable zone is obviously creeping outward, as essentially terraforming must be happening around the edges of settled land. None of this is explicitly described or explained, but it’s obvious if you’re paying attention.

Really, this is an excellent book for looking at how to integrate worldbuilding and backstory without ever resorting to an infodump. Honestly, an infodumpy prologue would just ruin this book completely. Instead Kirstein does an outstanding job of setting her story in a coherent world without ever explaining much at all, leaving it to the reader to try to figure out — rationally! — the mysteries of the world. Very nice job here, and so many hooks planted for the future. What could the guidestars actually be, and what is their actual purpose? What in the world is the wizards’ power actually based on, what are they doing, what’s the scary senior wizard up to? What’s up with this obviously quite hostile environment beyond the settled area? Lots of questions.

The plotting: Well put together. Seldom truly unpredictable . . . I mean, come on, like we weren’t going to see Will’s explosives used, right? But if the broad plot is predictable, the details are much less so. Plus the actual storytelling makes it a real pleasure to see how Kirstein works all those details out. It was so different reading this after three of Patricia McKillip’s books (I also re-read The Bards of Bone Plain after Bell and Kingfisher). I read McKillip’s books slowly, a few pages here and a few there, focusing at least as much on the sentences as the stories. In The Steerswoman, I zipped right through the story without really noticing the sentences, which of course is a good sign of a quite different style of excellent writing.

The upshot: Yeah, I grabbed the three sequels immediately.

The author’s note at the back says she’s working on a fifth and sixth book. Somebody who’s read the first four, please tell me: do these four books form a unified and complete story arc? Complete enough not to be jarring when you reach the end? Because you all know I’m always inclined to wait for a series to be really finished before going on with it, unless I’m sure of a adquate sense of closure. Thumbs up or thumbs down on reading the first four now vs waiting?

5 thoughts on “Recent Reading: THE STEERSWOMAN by Rosemary Kirstein”