So, even though I’ve been super-busy over the past week, I did find time to re-read The Bell at Sealey Head and then re-read Kingfisher — which I only read for the first time a couple weeks ago. I re-read Bell specifically to help me figure out what I thought about Kingfisher, which struck me as a highly peculiar book on a first read-through (it made more sense to me on a re-read).

Let’s take a moment to recall The Bell at Sealey Head, a story I quite liked that had several unusual characteristics. Remember Bell? That’s the one where the main characters, if they can be called that, had no influence at all on the plot of the book. Judd runs that little inn and has no cook; Gwyneth is the merchant’s daughter who writes stories about the bell – stories which have absolutely nothing to do with the actually bell of Sealey Head.

Emma, the housemaid who opens doors that let her see into the other world; and Ysabo, the princess trapped in rituals within that other world – they influence the plot (in Emma’s case, only slightly), but they don’t get a whole lot of pov time and I don’t know whether they can be considered main characters. Maybe Ysabo. Her more than anybody, I suppose.

Ridley Dow primarily drives the plot. Do we ever get any scenes from his point of view? I just re-read Bell and I don’t think we do. Miranda Beryl, heir to the mysterious Aislinn house, turns out to be important . . . sort of important . . . but I don’t think she gets any pov scenes either. The villain’s motivations are almost completely opaque even at the end.

I should add here, I liked Bell quite a lot and didn’t actually notice how little influence Judd and Gwyneth had on anything until someone else pointed that out to me. They may not drive the plot, but they’re both charming characters and you get pulled into their lives. Gwyneth’s polite unconcern for her aunt’s attempts to marry her off is particularly delightful. She’s like a Regency character being threatened by an unsuitable marriage to Raven Spruill, except that she’s not actually threatened. Judd is a lot more uncertain about that possible relationship than Gwyneth ever is.

And it’s not like the pieces of Bell don’t hang together, because they do, pretty well. The climax is pretty info-dumpy as we are told what kind of spell was actually cast on the other house and world; the evil spell is resolved with a couple of pages of confrontation; but as always McKillip’s prose is so beautiful that the reader is just carried along without quite noticing elements of the story that might well be obvious weaknesses in some other author’s hands.

So, about Kingfisher. I liked it quite a bit, though I doubt I’d put it in my personal Top Ten for McKillip. (Of course there is a lot of competition for that top ten list; see below.) But structurally it looks, at first glance and I think on reflection too, like it lands somewhere on a spectrum between “unusual” and “a mess.” 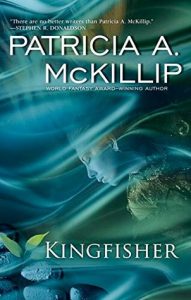 What do we have in Kingfisher? Let’s see:

A whole lot of mildly important characters, many of whom do not seem to have any particular influence on the important plot arc. Pierce Oliver, his mother. Carrie, her father and the associated set of characters at Chimera Bay; Prince Daimon; Todd Stillwater and his wife Sage; Princess Perdita and Gareth; Sir Leith and his son Val; Dame Scotia; Vivien and the other women associated with her. How many of those are pov characters? Let’s see: Pierce, Carrie, Daimon, Perdita. I think that’s it. How many of those characters are important in driving the plot? Three, I think.

Arthurian echoes, in King Arden and the knights of his court, including the important knight Sir Leith, who (everyone knows) has been engaging in a longstanding affair with the queen. King Arthur minus the tragedy; everyone involved obviously long ago reached an accommodation about this. King Arden also has an illegitimate son who is set up to tear down his kingdom. Again, unlike the Arthurian myth, that doesn’t happen – in fact that situation is in the end resolved extremely easily and quickly

Fisher King echoes. I had to look up the Fisher King to make sure that he is supposed to be lame. Yep. Wounded king, suffering kingdom, healed by magic, a connection to the Grail. So that’s where the book got its name. But the Fisher King thing in this story is connected to old history. It seems to add depth to the story, but sort of orthogonally to the main plot. Like another full story has been tucked into the backstory, but it shows through a lot more than is usual for novels-embedded-in-backstory – like it’s equally important but at right angles to the story we’re mostly concerned with in Kingfisher.

A most peculiar blending of fantasy with modern-world technology. Magic knives, magic cauldrons, sorceresses all over the place, knights and quests. Luxury cars, motorcycles, cell phones. Very strange. This part pretty much worked for me. It would never have occurred to me to write this kind of setting, but I found the blend oddly appealing.

A dominant male god and a subordinate female god, both associated with rivers. This part really did not work very well for me, I think partly because of the river thing. I could not take Calluna’s subordination seriously. I mean . . . when rivers meet, you can declare that the smaller gets subsumed in the greater, but all the water is equally there. When the rivers reach the sea, all the water together swooshes out into the ocean. I could not quite get worked up about which river flows underground and which aboveground, and the myths about the gods, well, whatever.

A bunch of extremely random events. When I read this book the first time, I could hardly follow it. This was partly because of all the characters. (Who is this again? I kept asking myself.) and partly because nothing seems to hang together.

Well, I went back and re-read Bell and then re-read Kingfisher, and that helped a lot. The second time through I had a much easier time sorting out the characters, plus I happened to notice a short passage that I think constitutes the heart of the whole story. This is on p. 182 if you have a paper copy. Here is the passage:

“Don’t make promises you can’t keep,” Lord Skelton warned. “Wandering around in the realm in search of its oldest power is liable to cause all kinds of disturbances and consequences. There were always unexpected dangers on those early quests.” He sipped wine and added more cheerfully, “Very colorful, sometimes deadly, often mysterious, random, occasionally verging on the ridiculous. No quest was ever safe. They exist to reveal.”

“Reveal what, exactly?” Leith asked in his deep, sinewy voice that Pierce was coming to love. “Lord Skelton?”

“The landscape of the heart.”

… and there you go. That so explains the random, occasionally verging on the ridiculous events that clutter up the story, particularly after the quest is more broadly underway. I was much happier with the book after realizing that. And that landscape of the heart thing . . . maybe, maybe. It’d be interesting to write an essay on Kingfisher and the function of the quest in revealing the landscape of the heart. Also, the disturbances and consequences arising from the quest — that idea is, as far as I can tell, the only thing that ties the main story to the Fisher King story.

Final take on the book: I liked it, I like it significantly better on a re-read, and maybe in a year or so I will re-read it and form a better idea of where to place it among the rest of McKillip’s books.

I’ve probably done this before, but just btw, here are my actual choices for Patricia McKillip’s Top Ten, counting down toward the very very best. See how it compares to yours – I mean, I’m sure we’ve all read everything by McKillip, right? So:

10. Fool’s Run – so peculiar how the whole story is shaped by an event none of the characters can influence in any way.

9. The Riddlemaster trilogy – I’ve read this so many times. It was one of those seminal works for me; I read it in high school and I’m sure it framed my whole conception of fantasy.

8. The Forgotten Beasts of Eld – another foundational work for me.

7. Song for the Basilisk – here’s one where I totally loved the ending.

6. The Sorceress and the Cygnet / The Cygnet and the Firebird – I really would have liked a third book that offered more of a resolution for Nyx.

5. Alphabet of Thorn – I admire it tremendously and I’d put it higher except I think the ending felt a bit truncated.

4. Ombria in Shadow – a beautiful, complicated story that left me puzzled at the ending.

3. Winter Rose – this one is sort of doing the same kind of thing as Alphabet of Thorn. I just love the different interwoven interpretations of events here.

2. The Changeling Sea – a perfect story.

1. The Book of Atrix Wolfe – another perfect story.