So, at this point I’ve read (or started and DNFed) four of the titles that had risen to the top of my TBR pile. Comments:

Remember how much I loved POWERS, the first book in this duology? Yeah, well, this second book was also wonderful. 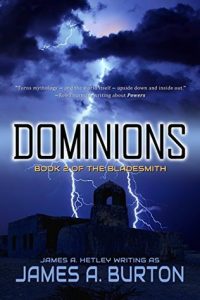 I think I enjoyed the first book a little more, because finding out what was actually going on was seriously cool. But the final resolution of the ongoing problem, as happened in this book, was also pretty great.

Also, about halfway through I thought I knew what was going to happen with Jess and I wasn’t happy with the outcome I saw coming. Only Hetley actually went in a completely different direction. I did see the actual resolution of Jess’s situation coming, but only a tiny bit in advance. It was a thoroughly satisfying resolution in several different ways.

Also, you know how so many books that include a romance starts with the principals at odds and then they come to know each other and finally wind up together at the end? Well, we got that arc in the first book, so in the second book, it was quite satisfying seeing the relationship between Al and Mel start off solid, continue solid, and wind up even more solid. No extra relationship complications thrown in there just to up the tension. Yay for that! There was plenty of tension having to do with surviving and saving the world and stuff, without adding in misunderstandings and hurt feelings and all that kind of thing.

So, yep, a great duology and one that’s going to wind up high high high on my top ten list at the end of the year, I bet.

I know some of you commented that you liked this one of his even though his books don’t always do it for you. Well, I’m sorry to say that this wasn’t the case for me. I really liked The City and the City and I was okay with Embassytown, but Un Lun Dun just did not do it for me.

I think I know someone who might like it much better than I did, though, so I will pass it along to him. Meanwhile, maybe I will move RAILSEA to near the top of my TBR pile and see if that one works better for me.

ASH AND BRAMBLE by Sarah Prineas 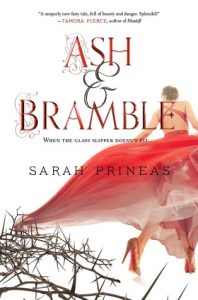 Okay, so, checking out the Goodreads reviews, I see that this Cinderella-infused story does not work for everyone. But it totally worked for me and now I’m really looking forward to the sequel, Rose and Thorn, which is due out shortly.

Whoever would have thought of making the Godmother the villain? That was brilliant.

How did Prineas come up with the idea of zapping everybody’s memory, occasionally multiple times, so that no one in the book knows their own histories or names? By the second half of the book, the main protagonist doesn’t even remember the first half of the story. That was brilliant.

What a great notion, making so many of the secondary characters who might have been bad guys into sympathetic characters – the stepsisters especially; even the stepmother by the end. So clever to show how these fundamentally decent people are being misshapen into petty tyrants by the way they’re all trapped in the Cinderella story. And Prineas pulled this off with just a line here and a line there. That was brilliant.

Now I’m totally looking forward to the sequel. Which is based on Sleeping Beauty, evidently. I’m not aware of a lot of Sleeping Beauty retellings, but I’m fascinated to see what Sarah Prineas will do with this.

THE IMPROBABLE THEORY OF ANA AND ZAK by Brian Katcher

Very different from the previous book of Katcher’s that I’ve read (Almost Perfect) – this is a light, quick read; in fact, I read the whole thing in one sitting, which is very rare for me. I normally enjoy a book more if I stretch it out over at least two days, but in this case I honestly didn’t notice how fast I was whooshing through it until I was practically at the end and then I was too into it to put it aside. 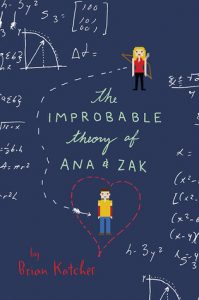 I very much enjoyed Zak, who is a total geek – into gaming and conventions and stuff, but confident, extroverted, and not bad-looking. Katcher adroitly steps in circles around the standard geek cliché. He also manages to write a YA romance without making either the guy or the girl super-hot. I thought that was against the rules or something. AND he makes the relationship between Zak and Ana central to the story, without making it angsty. More like this, please!

I loved Ana, so rigid and unhappy and for such a good reason. The family relationships are sketched in and then subverted – I figured Zak’s relationship with his stepfather would be sorted out by the end, and in fact I really loved Roger when he finally appeared as a real character, but I honestly did not see the thing with Ana’s mother coming. I took Ana’s understanding about what had happened with her older sister at face value, so at the end Ana and I discovered together that it wasn’t quite that simple.

I loved that Ana’s family is Catholic and yet Katcher has *totally avoided* the Evil Religious Fanatic trope. Not even though Ana’s family is so unhappy; the reasons for that have to do with misunderstandings that are not related to their religion. They’re just Catholic as part of their background, without dwelling on it. I can’t remember the last time I saw that. Maybe never. Of course I don’t read a whole lot of contemporary YA, but still. Can we please have more like this?

All right, now, the actual setting: Most of the action takes place at a comic convention, but we are not supposed to take the over-the-top convention stuff too seriously, I’m pretty sure; nor the intrusion of the . . . um, “more realistic” plotline that develops. All I can say is, the conventions I attend seem a little . . . calmer. Though it’s true that I am not up in the wee hours when the craziness might be taking place. This story has deeper layers, all having to do with family relationships, but up front it’s a total comedy, especially once we’re at the convention. Zak gets most of the best lines:

“Lots of words really fast,” I tell her. “That’s the secret to a good lie. They’re not sure what you said, and blame themselves when they confused.”

He looks at me with intense dislike. I smile, trying to look macho and possessive of Ana, without coming off as a jerk and not too overboard, because I really do need [him to give me] a shirt. Luckily, I’ve practiced that look a zillion times.

Just a delightful story, and it’s a bit difficult to decide where to go next. I don’t at all feel like following An Improbable Theory with something like Rose Under Fire, I’d prefer something I expect to be a little less intense. Choices, choices . . .