But here is a post at Barnes and Noble focusing on a handful of historical titles that particularly seem like fantasy.

To me, historicals seem like fantasy-without-magic, and sometimes I read a historical without quite noticing it isn’t exactly fantasy.

I was paying attention in HILD, because so many people were talking about that for SFF awards the year it came out. Fabulous, fabulous book. 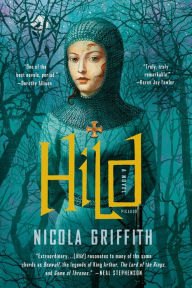 Not a bit of magic in it. Although the reading experience is so similar, I would never have nominated it for an SFF award because it definitely is not fantasy.

Contrast that with this description:

Few authors embody the relationship between historical fiction and fantasy better than Durham, whose work moves effortlessly between the genres. In The Risen, Durham skates as close to fantasy as possible without crossing the line, infusing the story of Spartacus’ slave rebellion with mystical priestesses who seem able to predict future events and a real sense from the various point-of-view characters that the gods they worship are very real, and actually do communicate with them, doling out assistance—or punishment. The strong characterizations make it easy to see how, in a world without formal education and not so separated from the more primitive and less civilized age that came before, a myriad of coincidental [events] could easily be seen as evidence of a magical world existing just under the surface.

I don’t know, I would probably read that as fantasy. If the pov characters believe the gods are real, and the gods kind of seem to be real enough to drive the plot, as a fantasy reader, I would take the gods to actually be real in this story. On the other hand, I would never read this particular novel. Unless it had a different ending. In which case, it would be set in a different world and at that point anybody would agree it was fantasy, I guess.

Another story that I think sounds very similar in its treatment of magical elements would be The King Must Die by Mary Renault. It’s got the same unquestioning assumption that the gods are real and influence the mortal world.

Also, I wonder how much of the decision about whether a book is historical or fantasy is based on the author’s name?

Soldier in the Mist? Obviously fantasy. Gene Wolfe wrote it.

Anyway, interesting list. I’ve never read any of these except HILD, but maybe I’ll take a look at the others . . . well, the ones that aren’t tragedies.