She was going to die because of the rutabagas. 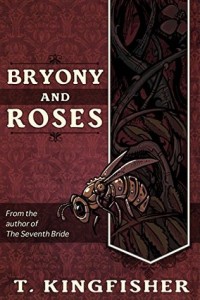 In her forward, T. Kingfisher, who also writes as Ursula Vernon, credits Robin McKinley’s Rose Daughter for her own dive into the Beauty and the Beast fairy tale. While I thought Rose Daughter was okay, for me no retelling will ever beat Beauty. But now, guess what? Bryony and Roses is officially my second-favorite Beauty and the Beast story. I loved it right from the rutabagas.

This isn’t a story that draws lightly on the fairy tale. This is a true retelling, and it’s wonderful. Bryony is a delightful protagonist: brave but still afraid of the monster that might be under the bed; kind but perfectly willing to carry a knife her sister gave her; innocent but not too innocent; bright but . . . well, actually not all that bright. To be fair, I didn’t think of the obvious solutions to the silencing aspect of the curse, either, until Bryony’s sister pointed them out. (To be *really* fair, I was kind of caught up in reading the story and so not trying to think of possible solutions.)

Anyway, it’s definitely Bryony’s voice that puts this story way up at the top of the heap of fairy tale retellings.

Unlike her sullen rosebushes at home, these were fully leafed out, little blunt ovals of green with dark red veins. There were flowers in every stage from barely budded to blowsy and dripping petals, all of them deep, deep scarlet. Small drifts of petals lay across the tiles.

She did not want to compare them to blood. It was a shame that there were so few dark red things in the world.

The Beast is also great. He’s appealingly sarcastic and really quite nice, even if he has kidnapped Bryony. I love the clockwork bee. It turns into such an integral part of the story, which I didn’t see coming at all. Granted, if I’d looked at the cover before reading the story, I might have guessed that the bee would be important. But I only looked at the cover just now, as I put it into this post.

Anyway, I also like the house. Often the house is pretty much a character in Beauty and the Beast, which is certainly the case here. This House is sort of friendly and sort of not at all friendly, and sometimes has, uh, questionable taste in décor and sometimes is just downright creepy.

The next room was full of birds. . . . There were birds of all shapes, all sizes, all descriptions. There were enormous eagles and tiny hummingbirds, great owls and strutting peacocks. There were partridge and pheasant and robins and ravens. There were birds that she could not name, with huge crests and beaks like shears; birds walking, birds flying, birds roosting with their heads under their wings.

And every single one of the was dead.

Still, despite its occasional creepiness, this retelling is definitely not horror; not even dark fantasy. It’s Beauty and the Beast re-envisioned but still intact, and it’s completely charming.

Also, I think Kingfisher pulls off quite a nice ending, which imo is a challenge and a half for this particular fairy tale. Not to mention that really brilliant first line, which may be my favorite first line ever. Rutabagas, seriously! The rutabagas even have their humble but distinctive role to play in the resolution of the story, too. This truly is a gardener’s version of Beauty and the Beast.

So, yes, Bryony and Roses is highly recommended if you’re into Beauty retellings, and now I really must check out what else T. Kingfisher/Ursula Vernon has written. Especially since “Wooden Feathers” is probably my favorite short work on my Hugo nomination list this year. Thank you to Jen who recommended the former, and Linda S who drew my attention to the latter.

5 thoughts on “Recent Reading: <em>Bryony and Roses</em> by T. Kingfisher”