So, Puppy J — Jos — Anara Justinian — is now a whole 12 weeks old. Three months! Spring has sprung, the apricot trees are blooming and the puppy is settling into the broader world. 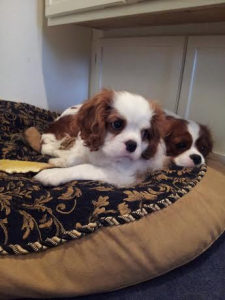 Basically this is a nice puppy. He’s an independent little cuss, perfectly happy to trot off on his own to explore, confident in new situations, starting to realize that people everywhere are carrying treats for him, all like that.

You remember I was waiting for cosmetic features to sort themselves out. Well, twelve weeks is about the time you can start to see how some of those features are going to work. So, in order of increasing importance:

Freckles. None! To be fair, Jos has a tiny little freckle on his tummy, where it is completely unimportant. For all I know he may be hiding a few under all that fluff, but that doesn’t matter much either. What matters is, his face is completely clean. Not even a little freckle down by his nose. Nothing. And on a really white face like this one, that really matters! So he took after his mother here rather than his father. Good puppy!

Underbite. Not yet! So far, Jos has had a good bite. That’s from three weeks, when his teeth first came in, to the present. In a Cavalier puppy — bred out of pug-faced English Toy Spaniels — the bite can go off and then come back any number of times, but it’s a good sign when the bite is correct all through this early period.

White sclera. Alas, the sclera is pale in both eyes. Maybe it’s marginally better to have this in both eyes instead of just one like his mother? Maybe it won’t be quite as obvious that way? But definitely this is a cosmetic flaw. Jos is not going to have the big round dark beautiful eyes of his father. Too bad!

Gay tail. You remember how Missus jokes about this “grave fault” in the novel 101 Dalmations? Well, it is a grave fault in Cavaliers, too. You want the tail carried at about the level of the back — higher is okay, but definitely not a vertical tail carriage like a Fox Terrier or something. I was talking about this with a friend; she was telling me about a really lovely girl someone is showing that can’t win because of her tail carriage.

On the other hand, sometimes a dog will just carry his tail a bit high when he’s feeling particularly full of himself, like when he’s got a toy and is strutting around because he’s Such A Big Dog. Jos is like that, I think — his tail seems *mostly* okay. I think.

Head. Pretty. Nice and broad. Jos should be a handsome guy, with a good, modern style of head.

For boys only: equipment in the right location. Nothing will so absolutely ruin a dog for show and breeding as retaining one or both testicles in the abdomen. Ishmael was very late to get both his down where they should be. To my surprise, his son was very early to sort his out and has been fine in this department since he was six weeks old. *Good* puppy!

Structural features: The puppy’s well-being is not affected by any of the above, at least not if he’s going to be neutered anyway.

Incidentally, I’ve heard of a couple of male puppies that were “neutered” by vets who didn’t remove a retained testicle and didn’t mention this to the owners. Not like this could happen by accident, most vets can probably count to two, so this was actual fraud and really contemptible.

Not the worst story I’ve ever heard about a vet — there’s a particular vet in St. Louis who is specifically mentioned in my contract as an “absolutely under no circumstances can you take your puppy to this guy.” That’s because he put a little puppy on a low-calorie low-protein low-fat low-nutrient diet for its entire puppyhood and just destroyed that puppy’s body. Let me add that, as the pet’s owner, you should apply reasonable common-sense assessment to veterinary advice. I for one will totally blame you if you starve your puppy, even if a vet told you to.

Moving on, moving on.

Structure is more important than cosmetics, obviously. In that department, Jos is pretty solid. I’d like his hocks to be set a bit lower. High-set hocks give you great initial speed but tend to reduce endurance. I think he’s okay in that department, but not ideal. Other than that, he seems well put together. Good angulation, good length of neck.

The bottom line: a good puppy, not perfect, but totally worth keeping to see how he grows up. 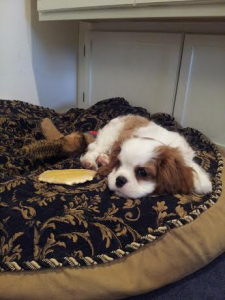