Okay, in reference the recent post about *Yet Another* SFF Novel Where Early Christians Are Intolerant, Bigoted And Basically Eeevil, and the extreme lack of contemporary work that treats religion in a more thoughtful and historically literate manner . . . here is a compilation you may find of interest. Thanks to everyone who helped build this list!

Published in 1960, The High Crusade by Poul Anderson. This is an immensely fun and moderately believable story, a real classic. Craig reminded me of it.

Published in 1962, A Wrinkle in Time, which I had inexplicably forgotten about. SarahZ added this title, which I should have thought of myself. SarahZ also gets a gold star because science and religion are not shown as opposed in this one.

Published in 1969, In This House of Brede, by Rumer Godden, which I just thought of right this minute. It’s not SFF nor properly historical, but it is one of the most beautiful novels I’ve ever read.

Published in 1971, Operation Chaos, also by Poul Anderson. Mary added it to the list.

Published in 1996, The Sparrow by Mary Doria Russell, presents both science and Christianity in a positive light. Well, more or less. What people get wrong in this one has to do with their lack of omniscience, for which no one can be blamed even if the consequences are dire. Incidentally, I don’t believe in the evolutionary background of the alien species in this duology. AT ALL. But I still really enjoyed it! Even though, fair warning, it contains the second most horrible set of events I’ve ever encountered in literature. Thanks to SarahZ for reminding me of this one as well, though I’m not sure I have the nerve to reread the duology. The ending is hopeful, though, so if you pick up the first book, you really must go on to the second (Children of God).

Published in 2002, Declare by Tim Powers, another suggestion offered by ElaineT.

Published in 2003, The Beacon at Alexandria by Gillian Bradshaw, on of my very favorite historical novels.

Published in 2006, Eifelheim by Michael Flynn, which I haven’t read but which is now on my radar for the second or maybe third time. I think I must try it. Craig and ElaineT both pointed this one out.

Published in 2008, The Night Angel trilogy by Brent Weeks, which deals respectfully with faith if not specifically with Christianity. Megan reminded me of this trilogy, which I read and pretty much liked, but it was just a bit over the grim and gritty line for me and I wound up giving the trilogy away.

Published in 2009, In Great Waters by Kit Whitfield. I read this but am embarrassed to admit I don’t remember the bishops, about whom Siavahda says in a Goodreads comment, “I think I remember that one is not very nice, but the main one definitely is a lovely man and helps save the lives of the main characters — although he does temporarily turn against them at one point, it’s for very understandable reasons fueled by his faith.”

Published in 2014, The Chaplain’s War by Brad Torgersen. I haven’t read it. Goodreads says: A chaplain serving in Earth’s space fleet is trapped behind enemy lines where he struggles for both personal survival and humanity’s future. ElaineT and her husband give it two thumbs up.

Also published in 2014, Paradigms Lost by Ryk E Spoor, of which ElaineT says it “doesn’t have a lot of overt Christians but treats all believers respectfully.”

Published in 2015, The Mechanical and others in the series by Ian Tregillis. Siavahda says, in a comment on Goodreads, that this one “actually kinds of reverses the trope; the super-sciencey people are the ones who are the worst, morally, although most of them are only grey rather than outright evil. The priest who’s one of the main POV characters is a wonderful character and really embodies the best of what I think Christianity is supposed to be.” Well, I’m not keen on the scientists being presented that way, either, but I don’t think EEEVIL scientists is really a *trope* as such, so it doesn’t strike me as so offensive and lazy as the intolerant-ignorant-person-of-faith thing, which you just can’t turn around without tripping over.

Published in 2015, Silver on the Road by Laura Anne Gilman, which of course is one of the ones I suggested.

Okay, that’s sixteen titles. Given that something like 2000 SFF novels are (traditionally) published per year, this is not very many.

If we tried to list SFF titles that represented just *particularly egregious* instances of the EEEVIL Christian trope, how many do you suppose there would be? If we tracked that trope from 1960 to the current day, I bet we’d also find a pretty obvious trend. Not that I’m volunteering to put in the work to define terms and count up books, so don’t hold your breath for that one. But still.

Okay, I’m adding some of these to my TBR pile now, not that I have time to read them just riiiight this very minute, but at least I want to remember they’re on my virtual TBR shelves. Yes, Eifelheim is one of the ones I’m going to try. 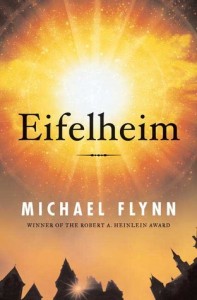 16 thoughts on “Novels that get religion right”