Hey, check this out! I just got the new cover for THE MOUNTAIN OF KEPT MEMORY. 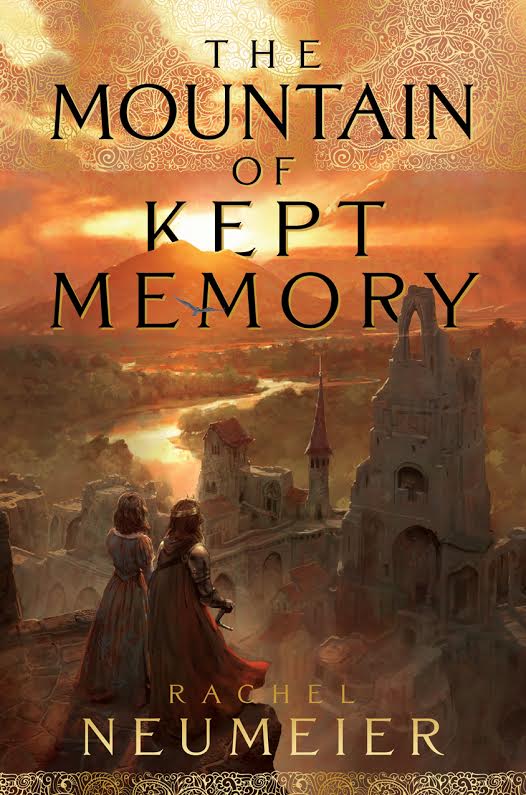 Nice, isn’t it? Now, yes, I grant you, it would be perfectly in character for the girl to be leaping boldly down toward a window ledge or something rather than standing demurely on the roof, because Oressa is that kind of girl. Though her brother Gulien might not like to actually watch her in action, so perhaps she is having pity on his nerves. Certainly Oressa is perfectly capable of pretending to a demure attitude.

Anyway! The city looks great, the mountain looks perfect — it’s not actually visible from the city, but artistic license, right? The falcon! That’s a subtle but excellent detail, not only because falcons are just in general snazzy, though they are, but because the falcon really is important in the story.

My favorite element is actually the light. So eye-catching, and letting the sunset reflect in the river leads the eye down to the figures in the foreground. The mountain is not a volcano, but the impression is apt, because it certainly does contain immense power.

The cover artist is Marc Simonetti, and his Deviant Art gallery is here. If you visit his gallery, you can see that he often likes dark, shadowy scenes with light coming down from above or shining up from below. It does add drama, even in dark covers such as the one for Game of Thrones.

The cover designer is Michael McCartney, and if the scrollwork was his idea, well, good job! It’s very elegant, whoever thought of it. Nice clean font, easy to read the title and (a not-unimportant detail) my last name stands out well.

What do you think? I think this one’ll be hitting the shelves round about October-ish. Fall, anyway.