Bone Gap is one of the many 2015 releases I was hoping to read before nominations for this year’s Hugo close. As it happens, I had a few days after I basically finished this current round of revision for The White Road of the Moon, and while I was waiting for a marked-up manuscript of the same to make it to my house – it was delayed, and I needed to go over it before finishing the current revision — I had a chance to read something off my Urgent TBR pile.

The marked-up paper copy of my manuscript looks like it will be easy and quick to go through as well, so Yay! I will probably shoot it back to my editor on Monday, after which I’ll be free to choose something else to read. I’m thinking I will probably read Karen Memory, since I have it on my Kindle and the beginning is catchy. 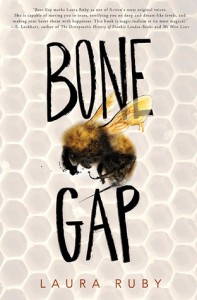 The people of Bone Gap called Finn a lot of things, but none of them was his name. When he was little, they called him Spaceman. Sidetrack. Moonface. You. As he got older, they called him Pretty Boy. Loner. Brother. Dude.

As for Finn, well, they thought he was a little weird, but that was okay with them. “Yeah, that boy’s nuttier than a honey cluster,” they might say. “But he’s a fine-looking nut. A sharp nut. Our nut.” Finn, they were sure, had his heart in the right place. Just the way they did.

Eventually, though, they found out that there was a good reason for Finn’s odd expressions, his strange distraction, that annoying way he had of creeping up on a person. A good reason he never looked anyone in the eye.

But by then it was too late, and the girl they loved most – and knew least of all – was gone.

The corn was talking to him again.

It had been a warm winter and a balmy spring in Bone Gap, so everyone with a field and a taste for corn had plowed and planted earlier than they’d ever dared before. On the last day of his junior year, exactly two months after his life had burst like a thunderhead, Finn walked home from the bus stop past plants already up to his waist. It was his favorite part of the afternoon, or should have been: the sun was bright and hot in the sky, the corn twitching their green fingers. Corn can inches in a single day; if you listened, you could hear it grow. Finn caught the familiar whisper – here, here, here – and wished it would shut up.

What I like about this beginning: Everything in the prologue is so misleading! Go back and look at that line: They knew him as well as they knew anyone. We are going to find out that practically everything “they” know about everyone is wrong. I love this.

Although I should add that the town of Bone Gap really does have gaps “just wide enough for people to slip through, or slip away.” That part is true.

What I don’t like about this beginning: You can’t tell how misleading the prologue is until after you’ve read the book. And when I encountered it for the first time, that prologue was kind of a turn-off. It looks like we may be forced to re-live some horrible tragedy and that we may be forced to inhabit the pov of a creepy kid who did something awful to a girl. The cover doesn’t help because it has a horror vibe.

If you all hadn’t insisted Bone Gap was a great book, if I’d opened this book in the bookstore and just read the first couple of pages, I wouldn’t have gone on with it.

What Bone Gap is not: It does have a horror vibe to it, so that cover is actually appropriate. But it isn’t really horror. You could call this story dark fantasy, but I’m not sure that is the best term, either.

What Bone Gap is: a contemporary story that reverberates with myth; in particular, with the Persephone myth.

The quote from Lockhart on the front cover refers to this story as magical realism. I don’t think that’s quite correct, though I can understand why some readers would tend to put it in that category. In magical realism, magical things are part of the setting and taken rather or granted by everyone. In Bone Gap, the only people who perceive the magical layers of the world are Finn and Petey (Priscilla). Well, and Roza, of course, who has been kidnapped. And Charlie Valentine, who is not what he seems. But no one else perceives the magical aspects of the world.

Though this book is clearly fantasy, I could see this being pushed as a mainstream literary novel. I wonder if it was marketed that way?

Anyway: What I particularly admire about Bone Gap.

The characterization. I love Finn and Petey; Finn’s brother Sean and Petey’s mom Mel. I love the relationships between all these people! I do blame Sean a little for not trusting his brother more, but I can see why he didn’t; and I also blame him for letting Roza go, but I definitely see what led him to do that.

I love Finn’s bravery, which is the courage of the loner who has learned to go his own way regardless of what other people think; and I love Petey’s ferocity and strength, a kind of strength which is different from Finn’s, and complementary. And Roza’s courage, which is different again – the strength to endure, and to keep trying to rescue herself, and never give up. Roza honestly does not come across as too good to be true even though everyone loves her.

I particularly love Finn, who is face blind. I don’t mind telling you all about this twist partly because I think it is incredibly obvious. I acknowledge that I may perceive this as obvious partly because I recently read Oliver Sacks’ The Mind’s Eye and partly because I’m moderately face blind myself, though not nearly to the degree Finn is, of course. But that bit about never being able to tell the male actors apart in movies is definitely something I recognize! But also, I don’t think it will hurt anything if you know about this twist going in, even if you wouldn’t have picked up on it till Petey figures it out near the end.

It’s so unusual for an author to hand a protagonist some kind of issue like this, and here Finn’s face blindness is beautifully elucidated as well as integral to the plot.

The elegant construction of the story. I love the use of the corn and the cornfields; I love how the idea of “what people know” is constructed and deconstructed; I love how the Persephone myth looms behind the contemporary setting. I want to read this book again just to appreciate its structure.

Which is not to say I understand everything Ruby was doing. I don’t understand the presence of the black mare; she helped bring Finn and Petey together and she helped show them the magic behind the ordinary world, but I can’t see how she actually fits into the mythology of the world or how she was integral to the plot. Though of course I loved her, because magical horse, what’s not to love? I also don’t really understand the dog that Roza befriends. If he was in the underworld, was he not dead? And if he were dead, how could he be brought with her back into the world of the living? But again, I’m willing to accept the dog because he’s a great dog. Also, I feel like perhaps Ruby had something in mind for those sorts of elements that does make them integral to the story and I’m just missing it. Ideas, if you’ve read this book?

The actual sentence-level writing is also very strong. The single most delightful element was the playful use of the concept of the essay prompt by Finn and Petey. Because they’re both thinking of college application essays, they play around with coming up with the most ridiculous prompts, a game which Finn then uses to construct a poem that finally makes Petey accept that he really does love her. Describe someone who has had the biggest impact on your life using only adverbs. Furiously, smoothly, ferociously, surprisingly, deliciously, quickly, slowly. These are presented to the reader one at a time so we can appreciate each one.

The ending. Love it.