This recipe is based on one from the 2006 Cook’s Country book, which contains an inviting recipe for an Almond Ring Coffee Cake by Katie Henderson. Naturally I didn’t make the recipe exactly as offered in the book. I made this instead, and it was really good, so here you go in case you want a fairly impressive bread that is really quite easy to make.

Filling:
The original recipe suggested 7 oz almond paste combined with ½ C powdered sugar and 4 oz cream cheese. I think almond paste is definitely sweet enough and can’t see adding sugar to it, but the cream cheese sounded like a fine idea. I used this filling:

1 (8-ounce) package cream cheese, softened
5 ounces almond paste (approximately; I used whatever I had in an open can.)
1 egg

Beat the filling ingredients together until pretty smooth. Set aside.

Bread:
The original recipe used 3 egg yolks, reserving the whites for a pre-baking wash in order to get lots of sliced almonds to adhere to the top of the bread. I skipped the almonds, thus didn’t need the egg white wash, so I just put one whole egg in the bread. It’s a really rich bread, made like so:

Warm the milk, warm the honey, melt the butter, and beat all of those together with the egg and vanilla. Combine the flour, salt, and yeast in the bowl of a stand mixer. Fit the mixer with the dough hook, turn the mixer to low, and add the liquid ingredients in a steady stream. Then turn the mixer gradually up to medium and knead four to six minutes, until the dough is smooth and a little sticky. Or make the dough with a bread machine or by hand, whatever you prefer.

Oil your hands and a fairly sizable bowl, shape the dough into a ball, place in the bowl, cover, and place in a warm place to rise. Henderson suggests heating the oven to 200 degrees, turning it off, and letting the dough rise in the oven. That’s a REALLY warm rising temp, but I did it that way and it worked just fine. The dough about doubled in 25 minutes, a fast rise, but at that temperature, no wonder.

Divide the dough in half and put half back in the bowl. Roll out the first portion to an 18 x 9 inch rectangle. Like most yeast dough, this is very easy to handle and no trouble at all. Spread half the filling on this rectangle and roll up the long way, forming an eighteen inch coil. Pinch to seal. Place on a parchment-lined baking sheet, coiling into a circle. Now take a paring knife, oil the knife, and make cuts to the outside of the ring, not all the way through, about an inch apart. Nudge the ring a little wider to separate the cuts. Look at the picture below if it’s not clear how this should look. Cover the first ring and put into the warm oven. Repeat the process with the other half of the dough, obviously. Let the rings rise about 30 minutes.

Now make the glaze while they cool. Henderson used a lot of powdered sugar (1½ C), a bit of milk, and 2 oz cream cheese. That’s a good start, but I was playing up the cream cheese, so I made the glaze more or less like this:

1 C to 1½ C powdered sugar (I didn’t measure it, just dumped some in a bowl)
1 Tbsp to 2 Tbsp milk ( I didn’t measure this, either, sorry, but it was enough to make a fairly thin glaze if I hadn’t added the cream cheese)
4 Tbsp cream cheese, softened.

Whisk glaze ingredients until smooth. Now, the way I did it, the glaze was really too thick to drizzle out of a spoon. I doubled over a long sheet of plastic wrap, poked two small holes in the middle of the plastic with a thin fillet knife, spooned the glaze onto the plastic, gathered it up, and piped tons of the glaze over each ring until it was used up, which was quite a generous amount. Mmm. 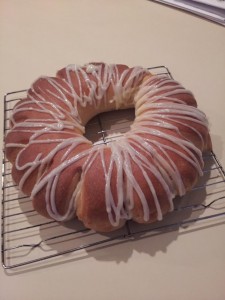 One ring came to work with me today. I devoured an embarrassingly large portion of the other ring while it was still arm and took the rest to my parents to get it out of my house. Did I say mmm? Mmm.