Via File 770, at Fantasy Faction, a top ten list of the greatest wolves in fantasy.

Actually, though, I think it was cheating to include werewolves. I also don’t like including Buck from Call of the Wild. Obviously it isn’t correct to say that Buck “turned from a domestic dog into a wild wolf.” That’s like saying that this horse jumped the paddock gate and went from being a domestic horse to being a wild zebra. I mean, what? You do know that you’re talking about different species, right? It’s ridiculous and annoying.

In other words, Fantasy Faction’s list makes me ask: Okay, but what are the top ten best actual wolves in SFF? Only I couldn’t get to ten, so how about five?

1. I actually am not following along with GRRM any more, but I’m willing to grant you Ghost from Fantasy Faction’s list. He sounds like a good character. Anybody actually reading this series who wants to weigh in with whether Ghost is a real wolf or a dog masquerading as a wolf?

2. I’m also not conversant with Robin Hobb’s Nighteyes from the Assassin trilogy, but perhaps eventually I will be, since that is on my TBR pile. Knowing about Nighteyes makes me more likely to move that series up on the pile, in fact.

3. There are the wolves in Through Wolf’s Eyes by Jane Lindskold. They’re not bad.

4. We have the trellwolves in Companion to Wolves by Sarah Monette and Elizabeth Bear. They’re not ordinary wolves, but they’re great and I hereby declare they totally count even if werewolves absolutely do not.

5. Akela in Kipling’s The Jungle Book . Grey Brother and the others were all right, but I always was particularly fond of Akela.

Okay, I can’t think of a lot more wolves in fantasy, so let’s switch gears: who are the top ten eagles in fantasy? Cause eagles appear quite a bit, don’t they, and they are always very snazzy. I’m not sure I can get to ten, but let’s just see:

1. Starting with a series I haven’t read, but I do have on my TBR pile 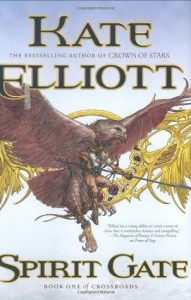 That looks so cool. I love the intelligent consideration of just how someone could be carried by a giant eagle without interfering with its flight.

2. Of course you can’t forget the eagles in The Lord of the Rings.

3. Continuing the popular theme of giant eagles, how about the rukh from Elizabeth Bear’s Range of Ghosts trilogy? I felt really bad for the chained male rukh — worse than about just about anything else that happened in the book. I could not believe the good guys made it into and out of the bad guy’s fortress without finding and freeing the poor thing. Of course enslaving giant eagles is likely to rebound against you eventually no matter how clueless the good guys are.

4. One more giant eagle — have you read Nick O’Donohoe’s great Crossroads trilogy? I despise the new cover of the first book, but here is the much better cover of one of the other books in the trilogy: 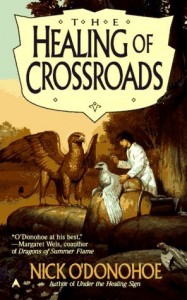 Of course this cover is showing the griffins (wonderful griffins!) rather than the giant eagles, who are called The Great. What a wonderful term for giant birds that act almost like the hand of God. They dwarf all other giant eagles ever.

5. Not giant eagles, but I was very struck as a young reader by the battle of the eagles in Joy Chant’s Red Moon Black Mountain. I don’t think the eagles played a huge role in the book, but still.

6. Remember Farsight, the eagle from The Last Battle by CS Lewis?

7. Okay, not an eagle, but one of my favorite birds of prey in fantasy: the Falcon Ter from The Forgotten Beasts of Eld. 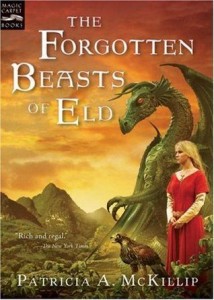 That’s seven! At least, if you allow the falcon, it’s seven. Only three ore to get to ten. What great fantasy eagles am I missing?