Every year for Christmas my mother gives me one or two cookbooks, and every year around Christmas time I buy a handful of cookbooks that have been on my radar for one reason or another. What can I say? I like cookbooks: the ones that are so specialized they offer only a handful of recipes in a sea of text, and the ordinary ones that feature contemporary American cooking, and perhaps most of all the ones that help the reader build an image – and by “image” I really mean an impression that includes taste and scent – of a time or place very distinct from contemporary America.

Also, cookbooks are perfect for times when I am working on my own writing, because obviously you can pick them up and put them down easily. That’s so useful, I’m sure that’s a big reason I pick up several at the beginning of every year.

This January I have a stack of eight new cookbooks, wildly variable in type. Let me mention four of them here, which will be a post that’s quite long enough.

First, I’ve got the Taste of Home Annual Recipes 2016 collection, which of course is as perfect a snapshot of ordinary American home cooking as you can get. These are useful collections, with plenty of approachable, inviting recipes, though the organization is always a bit of a pain. It’s not like all the desserts wind up in one section. No, some are in various different dessert sections and some in the “family favorites” section and some in the “potluck pleasers” section and some in the “holiday and seasonal” section and so on. This is the kind of book where you really *need* the index, if you’re to have any hope of finding a recipe you vaguely remember is in there somewhere. Still, the books are more convenient than the year’s worth of magazines.

I’ve marked about a dozen must-try recipes in this particular book – most, alas, are desserts, and with my caution with carbohydrates, it’ll take a while to find an opportunity to make most of them. But let me share one I really, really want to try. Just calling it a filled angel food cake doesn’t do it justice, so I will call it:

The book offers a promising recipe for angel food cake that I will probably use, but surely you all have a recipe, so I won’t type it in here. Their recipe uses a ten-inch tube pan, so that’s the size of cake that is meant to accommodate this filling.

I recently gave a recipe for lemon curd here, and it was excellent, though granted I used a Meyer lemon rather than two ordinary lemons.

Now, here’s how to assemble this beautiful dessert:

Beat the cream until it starts to thicken. Beat in the mascarpone and 2 Tbsp powdered sugar. Beat until soft peaks form. Fold in 1/3 of the lemon curd.

Slice an inch off the cake. The contributor suggests using toothpicks inserted all around the cake as a guide for slicing off an even inch, which sounds like a good idea.

Remove some of the interior crumb of the cake, leaving an inch shell on each side. I expect the discarded cake would make a nice treat for the baker, though in my house the dogs would surely get a share.

Layer the strawberries along the bottom of the tunnel, spoon the mascarpone cream over the strawberries, and then spoon the rest of the lemon curd over that. Replace the top of the cake. Glaze. Chill at least four hours. You can cover the cake once the glaze sets.

There, now, doesn’t that sound like a wonderful dessert for, say, Easter? The book also offers recipes for a chocolate-filled version and a version you fill with sherbet and freeze. Those sound good, too, but I have to admit, for once, it’s the non-chocolate lemon-and-strawberry cake that strikes me as most irresistible.

Okay, second, I have the Cook’s Illustrated 2015 book. These are fun to read, with their detailed exploration of what happens if you change this or that. I do indeed tend to turn to Cook’s Illustrated for, say, the best possible Boston Cream Pie recipe.

The strength of Cook’s Illustrated, imo, is their contemporary American recipes. I think they sometimes strive to unnecessarily Americanize recipes from Thailand and China and so on. These days, what with the internet and global grocery stores, surely it isn’t necessarily to try so hard to find alternatives for, say, yakisoba noodles. I mean, it’s fine to suggest alternatives, but I don’t think it’s necessary to assume that your readers won’t be able to lay their hands on the genuine article. Though I think this tendency to Americanize recipes isn’t quite as strong as it used to be; for example, I notice that in the recipe for Mu Shu Pork, the contributor actually does give instructions for making Mandarin pancakes and warns that flour tortillas are not an adequate substitute.

In this particular volume, honestly, it’s their chocolate caramel cake that is having a practically hypnotic effect on me. It looks wonderful. Maybe my dad would like that for his birthday? That’s coming up reasonably soon. The recipe is really too long and detailed to give here, though if I make it, I will probably change it up a bit and then post my version.

Third, here’s Gourmet Ingredients by Sophie Grigson, a lovely coffee table sort of book that offers a delightful paean to a whimsical selection of ingredients, some more out-of-the-way than others. It was published back in 1991, I see, and now seems to be available only used, but with some copies available at very inviting prices. Let me see, the sections include: herbs and spices; oils; vinegars and bottled sauces; pickles, preserves, and candies; mushrooms; vegetables; fruit and nuts; grains, legumes, and pastries; and dairy products. 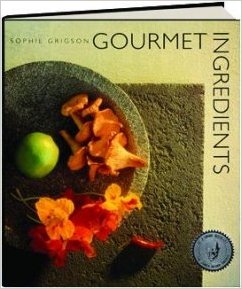 Every section explores the world of somewhat unusual ingredients, whatever Grigson felt like including, like angelica and lovage and sweet cicely among the herbs; amchur (powdered green mango) and nigella and mastic among the spices. I love an Indian recipe I have for potatoes with amchur. I also have this great recipe for crackers with nigella seeds in some Indian cookbook, I think one of Julie Sahne’s. Now I really want to pull that out and make the crackers.

Grigson offers a small selection of recipes after each section of ingredients. For example, she includes a recipe for shortbread cookies flavored with mahleb, which are the seeds of a type of wild cherry, used as a spice in parts of the Middle East. As it happens, I have some mahleb seeds in my spice cabinet. I have never yet used any, so I guess it’s pretty likely I will try these cookies in the fairly near future:

6 Tbsp butter (Grigson says “slightly salted,” which seems awfully vague)
1 C flour
2 tsp freshly ground mahleb
¼ C vanilla-scented sugar (Probably Grigson explains this somewhere in the book, but anyway, you scent sugar by slicing a vanilla bean in half and burying it in the sugar canister. It doesn’t take long to scent the sugar, but probably several days in advance would be best).

Melt the butter; cool till tepid. Mix the flour with the mahleb and sugar. Add butter. Roll tsp of the dough into balls and place on baking sheets lined with parchment paper. Bake at 300 degrees for 30 minutes. Cool a few minutes on the baking sheets, then cool completely on racks. Coat with powdered sugar, optional.

Okay, the fourth cookbook on my stack is Inside the Southeast Asian Kitchen, which turns out to be one of the books that has an editor (Tan Su-Lyn) rather than an author. I don’t in general find those books quite as appealing, since they generally lack the personal feel an author will (or should) bring to a book.

On the other hand, each country’s section in Inside the Southeast Asian Kitchen was written by a particular author, which does allow for that personal flavor to come through, more in some chapters than in others, though I’m still working my way slowly through the book. Each chapter features a different country in the Association of Southeast Asian Nations, ten in all, and begins with a brief description of the food customs and cooking techniques of that country. I wouldn’t have minded a bit if these sections had been more extensive. 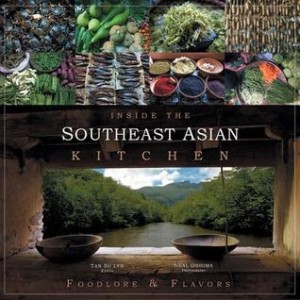 There are about eight or so recipes per country, so probably about 80 recipes altogether, so this is not meant to be a definitive treatment of the area. There’s something of an emphasis, the editor notes, on special occasion dishes, but those that are cooked in the home rather than restaurant dishes. As I said, I’m still working my way through the book, but it does seem to me that many of the recipes are fairly approachable for an American home cook. Let me share one here by way of example:

The version of Indonesian rendang given in this book – long-cooked beef in coconut milk – looks good and really quite easy, as long as you can cope with the idea of using 2.3 L of coconut milk for one recipe, which, wow, that is a lot of coconut milk. Granted, the recipe also calls for 1. 35 kg of beef (or buffalo), which is quite a chunk. But still.

The author of this section, Sri Owen, says, “My recipe is the recipe that was dictated to my mother by my paternal grandmother, who used to cook buffalo rendang for large family gatherings.” Owen adds, “Rendang is traditionally eaten with glutinous rice cooked in coconut milk,” which I have to say certainly would take this recipe just over the top when it comes to coconut milk. Here’s the recipe, if you’re into coconut milk and want to try it. I’m too lazy to go get my phone and convert the metric measurement, though I’m sure you all know that 2.5 cm is about an inch, a kg is about 2.2 lbs, and a L is pretty close to a quart.

At this point, the author suggests transferring everything to a wok to continue cooking, but I’m not sure why except that the shape of the wok might help keep the meat submerged in the by now much reduced liquid. I suppose I might transfer everything to a smaller saucepan instead. Anyway, cook for another 30 minutes, stirring occasionally. The coconut milk will be practically all reduced to oil and the meat will start frying instead of boiling, it says, which is interesting and not a technique I’ve ever used in cooking. Stir frequently from this point. When the coconut oil becomes thick and brown – I bet you are caramelizing the sugars from the coconut milk, and the meat is probably browning at last as well – anyway, stir continuously for 15 minutes, until the oil has been more or less absorbed by the meat.

Discard the turmeric leaf or lemongrass stalk. Serve with lots of rice.

I don’t know about you, but that really does sound interesting and different and good and I think I must try it.

Okay, back to revision! With a break to make up a shopping list that includes lots and lots of coconut milk and a big chunk of beef chuck.

5 thoughts on “Recent Reading: a miscellany of cookbooks, part one”