No long ago, this post by Misty Massey, or I should say a comment on that post, caught my eye because of this tidbit: “The commercial writing business is … deadening. Disheartening. It would be easier to go the route of self-flagellation than to sit down and read an editorial letter. They are often (usually?) brutal. Most writers have skin thicker than a turtle shell by the time the first book is ever sent to the printer. A lot of writers give up.”

This struck me at the time, as I said, because this has not been my experience at all. As evidence, I thought I would share a bit of my latest editorial letter, which arrived yesterday. This letter concerns The White Road of the Moon, incidentally, and it reflects my editor’s thoughts after her first read-through of the complete manuscript. I’m going to see what I can do to illustrate her editorial letter without (obviously) spoiling the book, which will come out, incidentally in the spring of 2017.

Now, before I provide details, I should add that no doubt editors vary somewhat in their skill at writing editorial letters, though I would be amazed if they don’t all start with something complimentary.

Perhaps more important, I expect writers vary quite a lot in their emotional state when they receive an editorial letter – it may be very difficult for particular writers to believe in praise, while they have no trouble believing in the weaknesses the letters go on to address. I would imagine that a writer prone to depression or anxiety, or a writer who had a history of poor support from family and friends, might be prone to reading the positive bit with an “As if!” feeling, and the part that highlights weaknesses with an “I can’t believe I’m such a terrible writer!” feeling.

Though I don’t know. Maybe some editors really do write brutal editorial letters. If so, they should cut it out and get my editors to show them how to do it better.

Okay, then, here goes with The Editorial Letter:

The complimentary introduction: This is where my editor says many nice things. Although I know this must be standard form for an editorial letter, but it is very very very important to me because I firmly believe every word. I am certain writers have an easier time with writing and revising if they are disposed to believe compliments. This section provides motivation and builds enthusiasm for the job ahead.

In this case, Michelle says, “It’s a deeply compelling story and I couldn’t wait to find out what was in store for Meridy. Particularly as the story reached its conclusion, I was turning the pages furiously. What a finale! So much action and suspense!”

I should add that I already heavily revised this manuscript on the advice of my agent, Caitlin, so the smooth build of action and suspense owes a lot to her. Anyway, Michelle goes into specifics about characters and aspects of the world that she loves, all of which is spoilery. Sorry.

Oh, I will say this much about the characters: There’s a dog. He is not a sweet little dog. He’s a wolfhound. First dog I ever put in my fiction, I think. I’m happy Michelle mentions how much she loves him.

Anyway, Michelle finishes up thus: “As usual, your story is so strong and your writing is so lovely that the manuscript is already in excellent shape. There are just a few areas that I’d like you to think about for the revision.”

This actually makes me laugh, because it’s followed by four single-spaced pages of detailed critique. After reading the letter several times, I see that some of these points are very summarizable, so let me summarize them:

The backstory: There is not enough. Michelle takes about a page to go into detail about how the important history of the world needs to be worked into the early part of the book and very much clarified.

I’m pleased to see this because I think I can do it pretty easily. I think what happened is, when I cut 100 pages or whatever it was, a lot of the clarification of backstory vanished, and because it was all clear to me and I remembered it as part of the story, I didn’t realize it was gone.

The magic intrinsic to the world: It is not clear enough. There are several important aspects to the magic and none of them are as clear as they need to be. For example, this world has priests, witches, and sorcerers, and so Michelle says, for example, “What does each of these do and how do their powers overlap? Can anyone be a priest or do you have to be a witch to qualify? What exactly is a sorcerer? Do you have to be witch to be a sorcerer?”

This aspect of the revision will be harder, because if any of it is fuzzy to me – and I find some of it is – I will have to figure the details out now. One thing that can happen is that sometimes I will start out with one tidbit clear in my head (you don’t need to be a witch before you can be a sorcerer), but then by the time the story is finished, I’m not sure that makes sense. Michelle posing a bunch of specific questions makes me realize that actually I am not sure about some details I thought were settled.

What I need to do now is reconsider many aspects of this world’s magic and decide *for sure* how to handle everything. And then make it all crystal clear and totally consistent. Obviously without infodumping long explanations about any of it, but working information into the story isn’t the hard part; figuring out the exact details of how everything fits together is the hard part.

Character relationships: Oh, this is the hard part for me! I can’t go into specifics because practically anything would be too spoilery, but I can say this: As soon as Michelle points out that the most important relationship arc (a friendship between two girls, incidentally, rather than a romance) is kind of flat, and describes how it might be strengthened, and how it ought to contribute to the protagonist’s overall character arc, I see that (a) she is dead right, and (b) exactly what needs to happen to fix the problem. But it is going to be hard! Please can I just go back to working in snippets about the history of the world?

Then there is a page and a half about smaller issues, many of which really have to do with one of the three main points above, and the rest which will be quick and easy to fix. And that’s all, though obviously I have summarized a lot.

Previous work, undertaken because of my agent’s feedback, involved cutting one main character and one important character and simplifying the plot — that was much harder. I am sure that contributes to Michelle’s editorial letter focusing mainly on just the three points above.

Time to do all this: preferably by mid-February. That’s a month. I think I can do this in a month or less, even though the spring semester has started so that takes some of my time. Something else that will require time: in addition to hovering over Kenya’s now-three-week-old puppy, entered Ish in his first Rally trial, so I would probably be wise to revise some of the exercises, especially the walk-around down, which Ish does not really, truly understand yet.

Also, I just bought a new youngster, Chloe, a seven-month-old girl who will, I hope, help turn around my astronomically horrible luck with breeding. 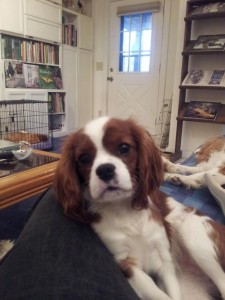 Chloe, formally known as Fox Creek Demeter, has (in no particular order) an impressive pedigree, very nice structure – I especially love her neck and shoulder – just about the darkest pigment I’ve ever seen in a Cavalier, nice dark eyes, and an unfortunate habit of SCREAMING WITH EXCITEMENT rather than merely barking like a normal dog. I rather hope that will at least mellow to a less piercing scream with time. She quite charmingly insists on sitting partly on my lap even if she has to share with my laptop. (This really is charming, even though she gets in the way.) She is the most physically fearless Cavalier I’ve met since Pippa was her age. I think by the time she actually is Pippa’s age, she will have taken over as Queen Of All She Surveys.

Most important of all, Chloe is completely unrelated to Kenya and her family, and has hopefully inherited from her mother and grandmother the ability to conceive decent litters and carry them all the way to term without *all the damned issues* that have made the past four – wait, five – years so difficult for me. Having puppies die: that is brutal. Believe me, editorial letters are nothing to it.