Okay, basically I have a hard time getting into Yet Another UF/Paranormal world. Not that I read all that many UF/Paranormal series, but enough, apparently, that I have no particular enthusiasm for another one.

And then sometimes one comes along that has a lot of recommendations by the right people* or is by an author I already know I like or has a particularly interesting-sounding description, and then the first couple of pages of the sample are especially appealing.

A Taste of the Nightlife was one of those. It’s the other book I’ve pulled out of my “Samples” folder so far this year. 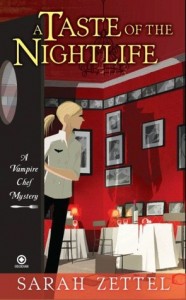 This is a first-person UF that features vampires and warlocks and werewolves, one of those where vampires and so on have recently been legally declared to have the same rights as ordinary humans – nothing unexpected abou any of that. But the protagonist, Charlotte Caine, is a human woman who is the executive chef of a relatively new restaurant in New York. And Zettel really writes her as a chef, too. She’s got the attitude and the obsessiveness and the cooking chops, though none of this takes center stage so much as to turn this into a different kind of novel. But, mmm, the food descriptions! When Charlotte gets upset, she cooks up a storm. Cheese straws and artichoke dip, crostini with olive tapenade, couscous with chicken and grapes, pomegranate salad with wilted greens and a shallot vinaigrette.

As one might expect, the story involves a mysterious murder, vampire/human politics, and a choice of Really Hot Guys who both make their interest in Charlotte clear. Brendan Maddox is a warlock from a powerful family of warlocks, rich and handsome and so on. Anatole Sevarin is an old, powerful vampire who is rich and handsome and so on. No particular reason to fall for Charlotte, but of course they both do. All very typical.

On the other hand, I didn’t get bored reading this story. I was properly baffled by the mystery, and concerned about what Charlotte’s brother was up to, and I liked how the supporting characters were handled, especially Detective Linus O’Grady and Charlotte’s roommates. The potential romance(s) stayed potential, which seems appropriate given how much other stuff is going on in this book. And the writing is very good, with (I can’t help but notice) correct, smooth use of verb tenses, always so iffy in first person.

Overall, this is a clever story, well written and plotted, not deeply emotionally engaging, but solidly entertaining. It actually reads like a cross between a vampire UF and a cozy mystery, and in fact I suspect that readers who enjoy cozy mysteries would find this an appealing entry into the UF/paranormal genre. I don’t feel much urgency about grabbing the second book in the series right this minute, but I expect I will pick it up, because as it happens I do like cozy mysteries as well as UF, so there you go.