The problem with “books I’m anticipating with glee” types of posts is that you always forget a couple that are really at the top of your list. I’m sure that’s not just me. So let me add to the earlier post a handful of titles I’ve been reminded of by other peoples’ most-anticipated lists.

The Edge of Worlds by Martha Wells 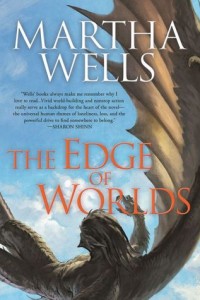 I mean, another Raksura book? I am THERE.

[T]he Indigo Cloud court had been plagued by visions of a disaster that could destroy all the courts in the Reaches. Now, the court’s mentors believe [a newly discovered] ancient city is connected to the foretold danger. A small group of warriors, including consort Moon, an orphan new to the colony and the Raksura’s idea of family, and sister queen Jade, agree to … investigate. But the predatory Fell have found the city too, and in the race to keep the danger contained, the Raksura may be the ones who inadvertently release it.

Children of Earth and Sky by Guy Gavriel Kay 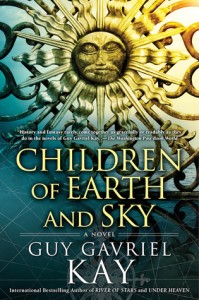 Although after River of Stars, I may want to check and make sure this one is not a grand, sweeping tragedy. Set in a world inspired by the conflicts and dramas of Renaissance Europe, says Goodreads. Big cast, lots going on, or so the description indicates. Well, I’m sure it’ll be beautiful. GGK is such a poet of a writer.

And besides that, we have The Obelisk Gate by NK Jemisin. 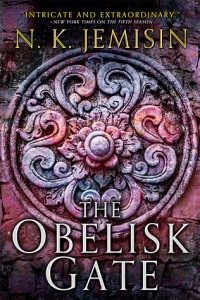 Which is the sequel to The Fifth Season, which I was (and still am) wary of because the description sounds so grim. Well, this is a trilogy, I believe, so I think I will probably not rush into the series. Plenty of time to see how readers I follow respond to the trilogy as a whole.

Meanwhile, from By Singing Light, I am reminded of:

Icon, the sequel to Persona by Genevieve Valentine, a book I haven’t read yet, but one that’s on my TBR shelves because I’ve heard good things about it.

Then Geekritique has reminded me about:

The Raven King by Maggie Stiefvater. 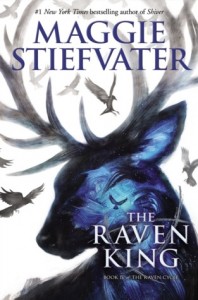 The Raven King! How could I forget? I have been waiting and waiting for this quadrilogy to be finished. As soon as this one is released, I’m free to read the whole series from the top, starting with a re-read of The Raven Boys. Until I get around to that, I won’t be reading any reviews of this one — not even the back cover copy. I look forward to reading straight through with no spoilers.

Also coming out this year, The Thorns of Emberlain by Scott Lynch. 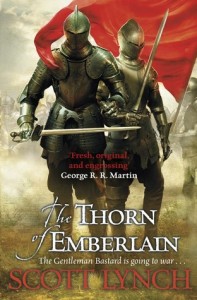 I think there is one more book in this series, but I have been reading them as they come out and I expect I will do the same with this one rather than waiting. Lynch is doing a good job of catching the reader up with each book, and I found the last one worked well without re-reading from the start of the series.

Unlike Lynch’s series, though, I will definitely be waiting for Django Wexler to finish up his series before I go back and re-read the first couple and then go on with it. But in the meantime, I will admire this one on my shelves: 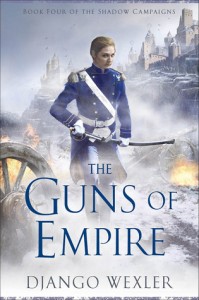 Guns of Empire by Django Wexler.

I loved the first book, The Thousand Names. I definitely look forward to re-reading it. And I also liked the second book very much, and I’ve heard good things about the third. The completion of this series, I presume in 2017, definitely counts as Most Anticipated Series Ending, even this far in advance.

So, yes, lots to anticipate in 2016 so far, and I’m sure we’ll all be excited about the second half of the year when we get there.

Let me just add that I’m so pleased and flattered to see The Keeper of the Mist popping up here and there on most-anticipated lists, too. Thank you all.

5 thoughts on “Yet more exciting titles due out this year”