So, The Palace Job. 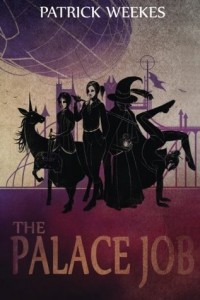 This is a book I listened to a few weeks ago. It’s a caper story, basically, not too serious but not completely light-hearted either. The narrator was quite good, which was crucial since there were a zillion important characters, like so:

Loch, who puts together the team that’s going to steal an extremely valuable book from the magically guarded vault in the floating city of the bad guy, Arch-Voyant Selestin. Locke was born to an important family and joined the military, but was betrayed by Selestin, who for various reasons destroyed her family and blackened her name. She’s not in it for the money, but to bring down Selestin.

Kail, one of her men from back when she was a scout captain in the military. Kayle is a competent fighter who rather famously always insults his opponents’ mothers to get them to lose their tempers so he can seize the advantage. This is a running joke through the story and it actually is funny the way Weeks does it.

Ululenia, the unicorn, who is not only a shapeshifter but also can bewilder people. As a magical creature, she doesn’t really have a soul, which becomes important as the story progresses.

Ghylspwr, a Warhammer that contains the soul of a long-dead king, who although much diminished from his past glory, still has firm opinions of his own.

Tern, a skilled safecracker, because every team of thieves needs one of those.

Her partner, Indomitable Courteous Fist, a VERY highly trained fighter, who is almost a parody of a ninja, though not quite. Icy Fists has taken a vow never to use his prowess against a living person. This doesn’t constrain him as much as you might think.

Hessler, a student of magic who got himself into trouble and can’t go back to the university. Hesler is neither quite as smart nor quite as cynical as he wants to be.

Dairy, an innocent teenager with a birthmark.

Nadia, Locke’s sister, whom Archvoyant Silestin trots out as evidence of his magnimity on public occasions because he adopted her after he destroyed her family (that last bit isn’t public knowledge).

That’s a dozen important characters, counting the Archvoyant, and that’s even leaving aside quite a handful of other secondary characters, some of whom are also important. I hope you appreciate that I had to keep all these characters straight while listening, not reading. I just fixed all the names by looking at reviews on Goodreads, because I had virtually none of them spelled correctly in my head. Yet while listening, I could keep them straight. Patrick Weekes succeeded in varying everyone’s voice – Ululenia has a poetic way of speaking with lots of nature metaphors, whereas Tern is snarky, and Icy Fist’s manner is a bit like a Vulcan’s, and so one. Even so, honestly, this book must have presented the biggest challenge for the narrator, but she varies her voice enough to make every character distinctive. I was impressed.

So: a fantasy heist story with The Team pitted against Archvoyant Silestin. Who is definitely a bad guy, so it’s easy to root for Loch and her team. And then, of course, behind the up-front story of the theft, we have a prophecy: the Champion of Light must face the Champion of Darkness, thus determining the fate of the world . . .

The characters: There’s not enough room in this story to *really* develop any character, but I would say there is juuuuust enough complexity to each one that a character reader is likely to enjoy this story. I mean, I did. The bad guys are pretty one dimensional. But who cares? The Archvoyant is power-hungry, he’s selfish, he’s ruthless, and he’s an excellent bad guy for the story. The Warden is an idiot, but hey, the story has that light-hearted feel to it, so he, too, seems right for the story. Beal (not sure of the spelling on that one) is purely evil, but he’s supposed to be purely evil, so that works, too.

The plot: It’s clever, like any successful caper story. The pace doesn’t feel too fast when you’re listening to the story; in fact, it sometimes seems leisurely. But a lot certainly happens and I think the whole story would probably feel faster if you were reading the book instead of listening to it. Not rushed, but brisk.

The story opens with Locke and Kayle needing to escape from an escape-proof prison up in the floating city. Spoiler: they do escape.

Anyway, then Loch puts together her team. The Archvoyant sends Pyvic and a couple of others after her, so we get two plotlines, one of Loch and her growing team and a secondary pov from Pyvic as he tries to track her down.

There are complex challenges to keep you wondering how the team can possibly pull off the theft, moments of uncertainty, and startling plot twists. Not every plot twist is a surprise to the reader, and Weekes makes it clear that they’re not supposed to be – when Hessler is all, “Loch, Loch, listen, I think thus and so!”, Loch only shrugs and answers, “Of course. You’re only realizing this now?”

Though the story has plenty of humor and light notes, deeper notes are suggested by, among other things, the interludes of political puppet shows – I surmise that the author is pretty cynical about the way the media presents the news. And race is an issue in this world, with Loch and her family belonging to a marginalized dark-skinned people. But the story doesn’t take itself too seriously and the reader doesn’t have a lot of doubt that eventually the bad guy will be defeated, that Light will defeat Darkness and the world will be saved from an eternal descent into shadow, and that the good guys will not only win, but mostly likely survive to enjoy their victory. Not that there weren’t moments when I had my doubts about one character or another.

Overall rating: Hard to rate. I’m primarily a character reader, and though I liked this book, I wouldn’t say that I found it particularly gripping or emotionally compelling. But that’s not what Weekes was going for. So, compared to books I truly love, I actually *liked* this at about a three and a half out of five, or about a seven out of ten. But it definitely succeeds as a heist story and as a book to listen to while driving. The actual writing is very good, the plotting clever, the conclusion satisfying. So overall, I’d say: five out of five, at least eight and a half out of ten.

3 thoughts on “Recent Reading: The Palace Job by Patrick Weekes”