Like Brandy, I based this on the survey offered by Jamie at Perpetual Page Turner, though I did fiddle with it kind of a lot. I will probably read a few more books this month, but I’m a bit distracted right now by life and tending to steer clear of anything too absorbing because I don’t think I’m in the mood to appreciate really great stories. So I’ll post this now and assume it’ll be more or less accurate in three weeks.

That’s just over 100 books read in 2015, which is, I believe, nearly a third less than last year, which only goes to show that I was indeed very, very busy with my own work this year. Also, this is the first year in a long time, maybe ever, that I read more SF than F. Re-reading all the Liaden books is what kicked SF into front place. Though I see if fantasy and UF/paranormal are lumped together, which is probably fair, then fantasy does still edge out SF.

Young Adult: A Face Like Glass by Frances Hardinge

Mystery: A Sprig of Blossomed Thorn by Patricia Greenwood

Romance: Once Upon A Rose by Laura Florand

Overall the single most amazing book read in 2015: Hild by Nicola Griffith 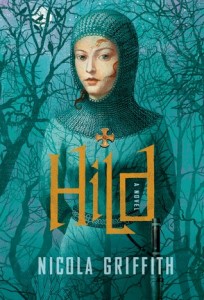 Now, to sort out the pile a bit:

Most surprising (in a good way!):
Beauty Queens Libba Bray – I didn’t know it was pure satire till I read it.

Book I most enthusiastically recommended to people:
Maybe Cuckoo Song by Frances Hardinge, but honestly it’s hard to say.

Favorite series I discovered in 2015:
The Spiritwalker trilogy by Kate Elliot

Book I can’t believe I waited until 2015 to read:
Eight Days of Luke by Diana Wynne Jones

Most thrilling, unputdownable book:
The Girl With All the Gifts by MR Carey

Book that shocked me the most:
The Country of Ice Cream Star by Sandra Newman

Book I am most likely to re-read next year:
Stories of the Raksura II by Martha Wells I mean, when the next Raksura novel comes out, I will certainly re-read at least this set of short stories and maybe all the Raksura novels and stories before I read the new one. Cause I do that.

Favorite cover:
Voyage of the Basilisk by Marie Brennan

Most memorable character:
Cat in The Spiritwalker Trilogy by Kate Elliot

Favorite female lead:
Zuzana in The Daughter of Smoke and Bone trilogy by Laini Taylor

Most beautifully written book:
Hild by Nicola Griffith, and also
The Country of Ice Cream Star by Sandra Newman

Book that had the greatest impact on me in 2015:
Hild by Nicola Griffith, and also
The Spiritwalker trilogy by Kate Elliot , because …

Best alien species:
The Feathered People in the Spiritwalker Trilogy were probably my favorite nonhuman fantasy species ever. Giving a fantasy nonhuman species a basis in science never occurred to me.

Favorite romance:
Layla and Mattieu from Once Upon a Rose by Laura Florand

Favorite friendship:
Nieshka and Kasia from Uprooted by Naomi Novik

Most unique book:
In the Country of Ice Cream Star by Sandra Newman

Okay, so, that is 2015. I see, flipping through my books-read list, that I really loved about 25% of the new-to-me books I read this year. Although that’s okay, it seems a little low.

I’m pleased to note that I put Hild in this spot last year and did indeed get to it this year. That’s great!

For next year, the book I most want to move from my TBR pile to my actual shelves . . . I’m not sure. Maybe The Demon King by Chima. Or California Bones by van Eekhout. Or Ash and Bramble by Sarah Prineas. Or I really want to re-read the first two books of the Jinx trilogy by Sage Blackwood and then read the third book.

Maybe I can plan to get to all of the above by the end of next year? Surely that’s not too much to ask?

Gentleman Jole and the Red Queen by Lois McMaster Bujold

Whoops, I hear the series is expected to go to five books. Well, at least I already also had as a tie for most-anticipated end of series:

The last book in The Raven Boys series by Maggie Stiefvater.

Whenever I get the last books of those series, I will definitely start back at book one and read them straight through.

In 2014, I said I hoped to read more nonfiction this year. I think I did; eleven is pretty good for me. For 2016, I’d like to read more books than I acquire and thus see a net decline in the size of my TBR pile.

Hey, it could happen.

I have a lot more 2015 releases that I hope to have time to read in the near-ish future, but so far the works that I would most like to see nominated for awards next year are:

I depend on other readers’ recommendations for short fiction. But this was a really good story.