So, my mother turned eighty on December 4th.

Eighty. Imagine being born in 1935. Hard to imagine that world anymore, isn’t it? The past truly is a foreign country. My mother’s family was very poor by the standards of 1935, which of course means terribly, crushingly poor by today’s standards. No indoor plumbing, essentially no medical care. What a different world she lived in! 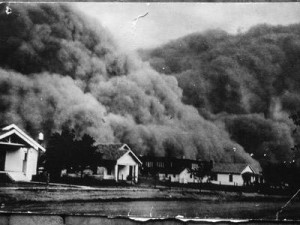 This is a picture of the Black Sunday dust storm in Texas in 1935. My mother was born and spent her childhood in Texas. She certainly remembers dust storms in Texas. I’m sure they still have them, though I doubt it’s ever as bad now as in the dustbowl years.

She was the oldest, which means she took on a great part of the burden of raising her younger siblings. And at that time, in that place, in her family, girls didn’t go to school. So she earned a GED and then put herself through college, and paid for younger sisters to go to college after her.

My mother doesn’t like a big fuss made over birthdays, and I know she spent a good part of the day raking leaves and stuff like that. I thought of making a cake and trying to cram 80 candles on it, but in the end, I made this instead, which was a big, big hit with all of us:

Of course I didn’t make that. I made this:

It goes without saying that you can make any brownies you like, or use a mix. I think the Girardelli brownie mix is quite good, and in fact I think brownie mixes in general make perfectly acceptable brownies. Having tried out this trifle, in my opinion you don’t want to use a brownie that is too gooey, but definitely not one that is like chocolate cake, either. A middle-of-the-road, basic, chewy type of brownie is likely to work best here.

If you’re going to make brownies with the recipe given here, then melt the chocolate with the butter. Cool to lukewarm. Beat eggs with sugar for 1 minute. Whisk in melted chocolate. Combine dry ingredients and fold in. Transfer to greased 8 x 8 baking dish. Bake at 350 degrees for 40-45 minutes, until a toothpick inserted in the center comes out with moist crumbs attached. For this use, overbaking the brownies a bit is okay, incidentally, because I did and it was fine. I just mention this in case you are ever in dire need of a way to disguise the fact that you overbaked a pan of brownies.

Any chocolate pudding or chocolate custard recipe would be fine, but I was kind of looking for a recipe that didn’t use eggs, mostly because I was low on eggs. I found a recipe for chocolate blancmange in Marion Cunningham’s Fannie Farmer Cookbook and it caught my eye because she said, of the vanilla version, “It is the dessert Jo of Little Women often carried to Laurie, her frail neighbor, to help restore his health.” Well, with a comment like that, how could I resist?

But Cunningham’s chocolate blancmange didn’t seem very chocolatey to me, so in the above ingredients, I have increased the sugar by 1 T and added 1 T cocoa. I’m pretty sure this would work, but I haven’t actually made it that way yet.

If you are going to make this blancmange, you do it like this: combine the cornstarch, sugar, cocoa powder, and salt in a saucepan and whisk in ¼ C milk until smooth. Heat the remaining milk and add gradually while cooking over medium heat and whisking continually. Cook until thickened. Continue cooking 15 minutes or so to ensure that the raw taste of the cornstarch disappears. Cool completely and chill until you assemble the trifle.

Get out either a bunch of little glass dessert dishes or one larger glass bowl. Cut the brownies into small pieces. Whip the cream, gradually adding the sugar, until stiff. Dollop whipped cream into the bowl. Scatter brownie pieces generously over the whipped cream. Spoon the pudding over the layer of brownie pieces and sort of spread out the pudding over the brownies. Sprinkle with toffee bits – I didn’t use that many, but they definitely did good things for this trifle, so don’t be too chintzy. Repeat layers twice, ending with a good dollop of the whipped cream and a generous sprinkle of toffee bits on the top.

I guarantee, everyone will love this, even if you don’t stick 80 candles all over the top.