I can’t say I was desperate for more books to load onto my already fully stocked TBR shelves, but one can hardly avoid buying a book or two at a convention. As it happens, books were particularly easy to come by at this year’s WindyCon. Here’s what I picked up: 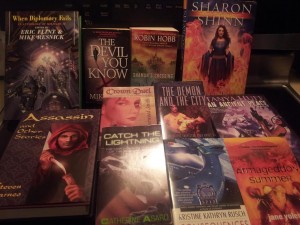 Okay, can you read all the titles? Here’s a list:

When Diplomacy Fails and Assassin And Other Stories by Steven Barnes were both published by ISFiC Press, which if I understand correctly is the organization, or a branch of the organization, responsible for putting on WindyCon. They were giving away stacks of free books and these are the two I picked up. Even though I’m not too interested in short stories, they look like they might have some good stories in them — and, you know, free books, right?

Then a used book dealer I know slightly is going out of business, so they had all their books half price. These were all used paperbacks in good to like-new condition, and they cost a dollar to about $2.50 apiece, and at prices like that, well, you don’t mind taking a chance on a book you know almost nothing about. So I picked up quite a few, including one, Crown Duel by Sherwood Smith, that I already own on Kindle. I don’t mind having a paper copy as well — or maybe I’ll give it away to someone who I think will like it.

I picked up three books by new-to-me authors: The Devil You Know by Mike Carey, Catch the Lightning by Catherine Asaro, Consequences by Katherine Rusch.

Two of those are a bit of a risk because they are not the first books in their respective series. I would never have bought them new. Catch the Lightning is the second book in Asaro’s Skolian Empire series and I must say, the first book of that series, Primary Inversion, has a weird description at Goodreads:

The Skolian Empire rules a third of the civilized galaxy through its mastery of faster-than-light communication. But war with the rival empire of the Traders seems imminent, a war that can only lead to slavery for the Skolians or the destruction of both sides. Destructive skirmishes have already occurred. A desperate attempt must be made to avert total disaster.

Look how that description falls into the passive voice! A desperate attempt must be made by whom? Isn’t that strange? We have no idea of the main character! I’m not sure I remember ever seeing back cover copy written that way before. I don’t think it’s very effective. I want to know about the protagonist, not just the situation!

The other one, Consequences, is the third book in Rusch’s Retrieval Artist series. The first book of that series sounds much more appealing:

His name: Miles Flint. His occupation: Retrieval Artist. His job: Hunt down the Disappeared–outlaws on the run, wanted for crimes against alien cultures. The catch: Flint isn’t working on the side of the law.

See? I don’t really get this — if he’s not working on the side of the law, then what’s he doing? Working for a private corporation? Working for himself? Nevertheless, focusing on the protagonist immediately makes the book sound more like something I might like.

Of course now I have to decide whether to buy the first books in order to start each series properly, or try the volumes I have to see if I like the authors. At least the book by Carey is the first in its series.

Moving on, I picked up The Demon and the City by Liz Williams because I already read and liked her Snake Agent. Snake Agent was the first book in the series, The Demon in the City is the second, so that’s perfect.

I also got Armageddon Summer because it’s by Jane Yolen. Well, and Bruce Coville. However, I see from Goodreads that it’s yet another look at a Bad Preacher and Bad Christianity. Wow, what a bold, unique vision that is. I suppose it’s possible Yolen handles this extremely cliched trope better than average, not that that’s a high bar. If I’d looked at the description and comments on Goodreads first, I doubt I’d have bothered picking it up.

Finally, I did pick up two books new, from Larry The Bookseller, who by the way has recovered from the car accident earlier this summer (if you heard about that). The broken rib wasn’t the big issue, it was the pneumonia he caught in the hospital. Anyway, I was glad to see Larry back at it. He’s a fixture of conventions, at least in the Midwest.

Of course I had to pick up Jeweled Fire by Sharon Shinn! And An Ancient Peace by Tanya Huff! I’ve been waiting for both of those. I’m sure I’ll read Jeweled Fire soon, but I may want to re-read all the Sergeant Toren books before reading An Ancient Peace, so who knows about that. I like just having it sit here on my TBR pile, though. 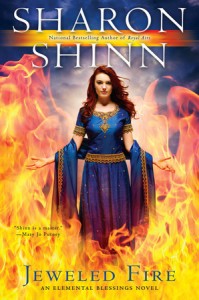 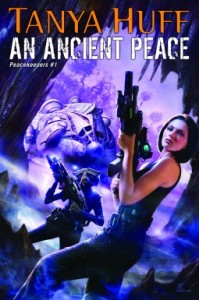 6 thoughts on “WindyCon’s contribution to my TBR pile”