So, yes, breaking my Reader’s Paralysis of Indecision, I finally picked A FACE LIKE GLASS off my TBR pile: 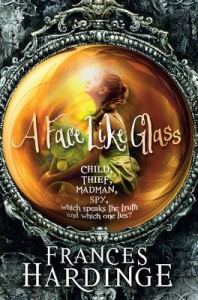 One dark season, Grandible became certain that there was something living in his domain within the cheese tunnels. To judge by the scuffles, it was larger than a rat, and smaller than a horse. On nights when hard rain beat the mountainside high above and filled Caverna’s vast labyrinth of tunnels with the music of ticks and trickles and drips, the intruding creature sang to itself, perhaps thinking that nobody could hear.

You all insisted that this was a wonderful book and so I added it to my TBR pile. Where it sat until now, mostly because, to be perfectly honest, the official description of this book sounds kind of ridiculous.

In the underground city of Caverna the world’s most skilled craftsmen toil in the darkness to create delicacies beyond compare. They create wines that can remove memories, cheeses that can make you hallucinate and perfumes that convince you to trust the wearer even as they slit your throat. The people of Caverna are more ordinary, but for one thing: their faces are as blank as untouched snow. Expressions must be learned. Only the famous Facesmiths can teach a person to show (or fake) joy, despair or fear — at a price.

Ah, so people have a very limited number of expressions. Which they have to be taught. Uh huh.

I had to take it on faith this story was excellent. Social media at its best! Because I *really* did not like this basic premise and wouldn’t have looked twice at this book except for you all insisting that I would love it. And you were all right, not that I doubted it.

So, reasons to love A Face Like Glass. I can suggest three. Here they are:

1. The setting is wild and wacky, but not in a silly way. In a dark fairy tale kind of way. I’ve seen Francis Hardinge compared to Diana Wynne Jones, but I wouldn’t say this one reminded me too much of DWJ. It reminded me a little of the Jinx trilogy by Sage Blackwood and a little of Patricia McKillip and, I don’t know, a little of The Girl Who Circumnavigated Fairyland in a Boat of Her Own Making by Catherynne Valente.

The overall setting of Caverna is wonderful, but the detailing is *particularly* wonderful.

In Maxim Chidrensin’s laboratory, a sigil-covered white barrel of Smogwreath currently sighed in one corner, whilst in the centre of the room a set of concentric salt circles confined a restlessly creaking vat of Addlemeau. The two wines were not yet ready to blend. The Addlemeau still needed to develop its undertones of vanilla, and the Smogwreath had not overcome its fear of strangers. Both, if disturbed, were quite capable of tearing strips off a man’s soul like bark from a tree.

The wines, the cheeses, all the crazy things the craftsmasters of Caverna make. But beyond that, there’s all the details about messenger boys on unicycles and carnivorous glowing plants, and the pony carts, and on and on.

2. The characters, starting with Neverfell and going on from there to Zouelle and Erstwhile and all the rest. Neverfell herself, raised, if that is the word, by Grandible in almost total isolation in the cheese tunnels, is the best kind of unreliable narrator. She is totally naïve about people. The reader can see *so much* that Neverfell misses. And then some of what the reader sees is completely wrong, so that’s entertaining. Thus Zouelle became one of my favorite characters, when I certainly didn’t expect.

And then there’s the double-minded Grand Steward and the Kleptomancer who steals whatever will cause the most uproar; the treacherous courtiers and the drudges and the palace servants and the putty girls. The Cartographers! It’s tough to beat the Cartographers.

But back to Neverfell. She’s naïve, ignorant, trusting, kind-hearted, forgiving, and ready to befriend practically anyone. All that is true, but it’s not complete.

“Do you want to know what I glimpsed in your face just now, for the briefest moment? Rage. I saw the same look flash through your expression this morning when you were filling the bowl with water. You’re shaking because you’re very, very angry.”

“Hmm. Well, somebody is.” Childrensin retreated into contemplation for a moment.

Neverfell is indeed very, very angry, and passionately outraged by injustice, of which there is plenty in Caverna, let me tell you.

3) The writing, which is exquisite. The structure of the story is wonderful. The prologue works. If you’re thinking that prologues never work, well, of course they do occasionally, and this is a perfect example.

Once we’re out of the prologue, Neverfell pretty much feels like the only pov character, but she’s not. Hardinge slides seamlessly from one pov to another in a way that serves to build the story while never distracting the reader from the focus on Neverfell.

When, 85% of the way through the book, Hardinge clips a bit off the story and hides it, she does it so openly and blatantly that it doesn’t feel a bit like the author-is-cheating-by-hiding-stuff. It is funny and artistic and perfect. I can quote the whole thing, which stands alone on a page:

Here is a piece that falls between the chapters, like a coin between paving stones. It is a slice of silence in the middle of the melody.

It is a rough and ragged spot, like the frill of stubs where pages have been torn out. There is no point looking for them. They are gone.

You see that for this one second, the narrator is speaking directly to the reader. This never happens except here. It made me laugh because I couldn’t believe Hardinge could get away with this. But she does.

And once we’re done with the story? I *love* the epilogue.

And, of course, beyond the structure, the actual sentence-level writing is lovely. Since October 29th, I have actually read:

The Shadow Queen and Shalador’s Lady by Anne Bishop

And I sincerely enjoyed all of these books, I really did. I mean, you can see I read multiple books by Lowell *and* Bishop. But the writing is *so* different, the authors might almost be writing in different languages.

Bishop’s writing is functional but not usually inspired, and tends to be repetitive in phrasing. Lowell’s writing is adequate but amateurish, by which I mean that, for example, he uses phrases like “she said, with a gentle smile.” In contrast, Hardinge, wow. I would quote a dozen wonderful bits except they would contain too many spoilers. I’m only with difficulty containing my desire to quote this great bit from right near the ending, but . . . no, obviously mustn’t do that. It’s tempting, though, it truly is.

So: you were all right, A Face Like Glass was lovely, and yes, yes, now I can see I must pick up all of Hardinge’s backlist. I have Gullstruck Island already, so that’s a start.

Next up: not sure. I’m feeling guilty because Hild has been on my TBR pile for such a very long time, but on the other hand Siavahda described (on Goodreads) Silver on the Road as a “dreamy western,” which does sound thoroughly appealing. Maybe I’ll read two pages from everything on my top ten list and see if there’s any book where I just . . . can’t . . . stop.

6 thoughts on “Recent Reading: A FACE LIKE GLASS by Francis Hardinge”