This really isn’t a trilogy, if we want to be precise. It’s a standalone novel (A Companion to Wolves) followed by a duology (The Tempering of Men and An Apprentice to Elves). 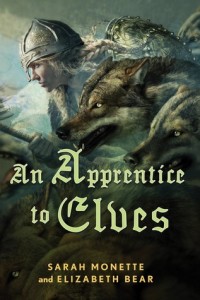 I loved the first book, and it is by far my favorite, but it’s hard to compare to the other two books because it’s so different. It has one pov character and we are kept very tightly in his point of view. This is Njall Gunnarson, who quickly becomes Isolfr Veradechtisbrother. He carries the story, and does a very good job of it, too. On this second reading, I noticed that actually Isolfr is really quite similar to Maia in The Goblin Emperor – the same commitment to duty and desire to do what’s right, and also the same introspective shyness. The world and also the protagonist’s place in the world are very different, but still.

In the second book, the pov widens. We get mainly Skjaldwulf’s point of view, but also Vethulf’s pov. There’s nothing wrong with either man as a pov protagonist – I like them both, in fact, especially Skjaldwulf – but for me they don’t have quite the appeal of Isolfr. And there are two of them, and they go in different directions rather soon, so the plot spreads out and becomes multithreaded and thus the story loses the intimate feel of the first book.

In the third book, now, the viewpoint shifts again and widens still farther, so that we have four important pov characters, none of whom were pov protagonists in the previous book. We also skip forward over a long period, so that most of the book takes place after Isolfr’s daughter Alfgyfa is fifteen or so.

Now, what I really wanted was a story from Otter’s pov. I didn’t necessarily expect this, but I would have loved to see that story.

Let me remind you here that the northlands are being invaded by the Romans (called Rheans, but for all intents and purposes they are Romans), and that in the second book we met Otter as a slave translator for the Rhean army. Otter helped Skjaldwulf escape when he was captured by the Rheans and Skjaldwulf adopted her. So that’s Otter, and I was SO SURE she would bond with a tough-guy male wolf and thus give us yet another twist on gender roles, something this series did a lot of in the first and second books. However, no. This is not that book.

Otter is a pov character, in fact, but a secondary pov character. Her plot thread is touching and actually rather engaging, but not complex or particularly interesting. This is probably because the authors didn’t have time to do a whole lot with her, given what else was going on, but it’s a pity Otter was set into the background.

The primary protagonist in An Apprentice to Elves – perhaps predictably – is Alfgyfa, Isolfr’s daughter, who has become, as you might have guessed, an apprentice to the svartalfar, as arranged back in the first book Most of the third book is spent in Alfgyfa’s pov, though some in the pov of Tin (the mastersmith svartalf to whom Alfgyfa is apprenticed). And we also get to spend some time in the pov of Fargrimr, Randulfr’s brother and a sworn-man …

Okay, now, listen. This is the same problem I had with Elizabeth Bear’s Range of Ghosts trilogy. Tons of great characters pulling the reader’s attention in different directions. I would have liked a 3rd book from Otter’s pov, preferably with her bonding to a wolf, and then a 4th book just from Fargrimr’s pov. I get that if your contact specifies three books you don’t get to spontaneously expand the series to four, but in an ideal world, that’s what I would have wanted.

Fargrimr is, as I said, a sworn-son. When his brother Randulfr bonded with a wolf and was lost as an heir, Fargrimr became an honorary son (instead of a daughter, see) so that she could be her – his – father’s heir and eventually lord in turn. Fargrimr is an excellent point-of-view character. But we don’t see all that much of him, because we are spending so much time with the other pov characters, which means mainly Alfgyfa and also Tin as well as Otter.

To be perfectly honest, I just never really cared all that much for the elves in this series – not the svartalfar and not the aettrynalfar. They’re interesting and all, but my heart was thoroughly captured by the wolves, and by the society formed around them, and by Isolfr, and by the people surrounding him. For me, the elves just couldn’t compete. That was why Alfgyfa wouldn’t have been my first choice to put front-and-center.

A Companion to Wolves — one of my favorite books from the last couple of years. Totally five of five stars. Five plus.

The Tempering of Men — I liked it, but not as much as the first book. Also ended on a cliffhanger, what with the invasion of the Rheans and all. Four stars.

An Apprentice to Elves — I liked it, but not as much as the third book. Four stars. Four minus. But it’s not the book’s fault I had a different story in my head, and your mileage may well vary. And, of course it was absolutely necessary to tie off the story and get everything settled.

Would I read another book in this series? Absolutely. There is plenty of room to go on with this series, and I hope the authors do, preferably in fewer than the seven years it took to get from the first book to the second.