And to help us all out with titling our current WIP, we have Elizabeth Bear:

Elizabeth Bear’s How To Title Your Science Fiction or Fantasy Novel or Series: A Tutorial in Three Parts: Part the Oneth: STRUCTURING YOUR TITLE

I actually saw this post several days ago or maybe a couple weeks ago and thought it was funny . . . and actually potentially useful, maybe . . . so I’m glad I remembered it.

This is one of the true classics of genre titling, by the way. In a statistic I just made up on the spot, I would estimate that 78.3% of genre books have some subvariant of the ADJECTIVE NOUN construction. (You can also jazz it up by going NOUN ADJECTIVE, too (Man Plus. Girl, Interrupted. I think Boneshaker probably goes under NOUN, but whatever. You get the idea.).

Titles are, in fact, hard. They really are. Often, we all just shrug and go with, as in the the examples above, the ARTICLE ADJECTIVE NOUN title, as in The Floating Islands, say, and then depend on the cover to be evocative enough to give the title a boost. Anyway, ARTICLE ADJECTIVE NOUN may be generic in form, but is at least a touch more sophisticated than the MAIN CHARACTER’S NAME titles, which always suggest to me that the author (and publisher) just gave up trying.

But you may not know how painful titles can be. I and my editor (and I gather a good many people got roped in at her end) went back and forth for ages before settling on The Keeper of the Mist for my next Knopf title. The title does make perfect sense given the story, but again I do think we are letting the evocative cover do some of the heavy lifting. 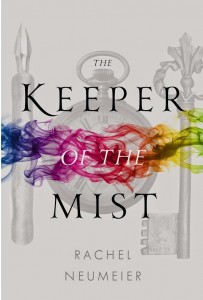 Though “mist” is an intrinsically evocative word, I think, so the title does have that going for it. If you click through to Elizabeth Bear’s post, you may enjoy reading through . . . or skimming . . . the looooong list of words provided: Now that you have the constructions, you need some words to plug in. Feel free to use as many as you like. And convert them into adjectives or adverbs as needed…. for example, Blood to Bloody. These are all great well-recognized Fantasy Nouns, and using them on a book cover will make sure that readers know what they’re getting!

By some mysterious error, such as failing to include the entire English language, “mist” does not seem to be on The List. Despite this, I think we can all agree that “mist” is totally a fantasy indicator in the title, yes? Mists of Avalon, Mistborn, Soldier of the Mist, The Garden of Evening Mists (by the Malaysian author Tan Twan Eng), reviewed here by Fantasy Book Critic; I haven’t read it, but hello, evocative title.

Anyway, Bear’s post is fun to read and it’s not entirely impossible that it might also turn out to be helpful in building a real title for a real book.

Incidentally, I did find this less tongue-in-cheek post about titles, by the agent Rachelle Gardner, moderately useful, though the process she suggests is a good bit of trouble and not necessarily worth it if you can just use some boring working title and hope for your editor to be inspired.

My favorite working title for one of my books, btw, is The Mountain of Kept Memory. I still can’t guarantee that this will be the final title, though Navah has not yet declared that she hates it or that Saga’s marketing people hate it, so hopefully that’s a good sign. I would consider all the rest of my titles to be, well, fairly generic fantasy titles.

3 thoughts on “Titles are hard”