Here’s a post that caught my eye at By Singing Light: Top ten series I’ve never finished. Of course the reason this post got my attention is that I’ve read so many of the series in question — Chanur! Hambly’s James Asher series! Others, too.

My first impression: my gosh, how can you not finish a series you’ve started?

My second thought: wow, you know, there are a surprising number of series *I* haven’t finished even though I started them. I mean, even if the series is out and finished. Obviously it doesn’t count if the only reason you haven’t finished the series is because it’s not finished yet. But! I’ve left series unfinished more than I thought. I don’t believe I can fill up a top ten list, but maybe a top five:

1. The Pathfinder series by Orson Scott Card. I read the first one; liked it quite a bit — so many different takes on time-related superpowers, it was just fascinating. Then I bought the second one but haven’t read it,and haven’t yet bought the third book.

2. The Dagger and the Coin series by Daniel Abraham. I read The Dragon’s Path; I *really loved* some aspects of the book and some characters, *really loathed* some elements and some other characters, and felt *highly concerned* at where the series might be going. So I never went on, but I didn’t get rid of the first book, either because I can see myself eventually picking the series back up.

3. The Fire and Thorns trilogy by Rae Carson. I read Girl of Fire and Thorns when it came out — in 2011, I see — liked it a lot, bought the other two, and have never quite got around to re-reading the first and going on with the others. I think this is 90% feeling like I don’t have time to read longer works and 10% fear that the series will go in a direction I really dislike. It seemed to me there was some potential for that to happen.

4. The Jinx series by Sage Blackwood. I read Jinx and loved it, read Jinx’s Magic and loved it, and haven’t read the third even though it came out in March. In this case, not going on with the series is 100% because I haven’t had time to re-read the earlier books with the attention they deserve.

5. The Lightbringer series by Brent Weeks. His Night Angel series was just a bit too dark for me, but The Black Prism was just that little bit less grim. I liked it very much and bought the second and third books, but I haven’t ever read them.

However, I see from Goodreads that a 4th book is expected to come out next year, so maybe that’s just as well. I hate being stuck with cliffhangers, and I guess this series doesn’t really count as unfinished-by-me since the author himself hasn’t finished it yet. Just-waiting-on-sequels is another and quite different (and larger) category for me.

6. And for something a tiny bit different: the series it took me the longest to complete, so far, is . . . Dorothy Dunnett’s Niccolo series. 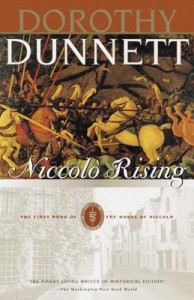 Somewhere in the middle, such terrible things pile up on the main character that I couldn’t stand it and just quit. Ages later, I finally came back and finished the series, only because I was sure . . . pretty sure . . . that Dunnett would eventually work her way to a happier ending. Which she did. But, people! Be aware that if you make things too overwhelmingly grim for your protagonist, you are likely to see some series drop off as some readers refuse to follow your protagonist that far down into the abyss.