So, Kate Elliot commented that she was pleased I noted that Cat in the Spiritwalker trilogy is a sensualist. I know what she means — I remember how particularly pleased I was when a reviewer noticed how, in The City in the Lake, The Bastard shifted to being called by name, Neill, over the course of the story. It’s wonderful when readers pick up on subtle details you agonized over!

But, sensual characters, yes, I think they are quite rare, but this is a characteristic I particularly notice and enjoy. I love it when characters enjoy life and take pleasure in the sensual world. I like that in real people, too, come to think of it. I’m not really that way myself, which is perhaps why I appreciate it in other people.

Kate commented that girls in particular get criticized for enjoying things, and this does sometimes seem to be true, doesn’t it? Girls get more comments about their big appetites and more critical comments when they pick up a second piece of cake, among other things. Even I have noticed that, and all my life I seem to have had a Not Interested In Your Intrusive Comments aura that mostly prevented anybody from directing such comments at me.

I wonder if sometimes an emphasis on plot and pacing and so on doesn’t tend to drive authors away from sensory detail. Or is it seen as shallow to enjoy sensory pleasures? Or are authors often inclined to write more intellectual characters because they themselves are more intellectual and less sensualist? I think we see a disproportionate number of introverted protagonists for that reason.

Off the top of my head, I can only think of three protagonists who are true sensualists, interestingly enough in three different genres:

1. Cat in the Spiritwalker trilogy. She loves food, she sinks into the experience of eating. This gives the reader a wonderful sense of the world through the taste of yam pudding and even ordinary porridge, though nothing will persuade me that turnips are worth bothering with. Cat also enjoys sex, though I was personally just as pleased to have this left non-explicit. Even Cat’s enjoyment of her husband’s vanity is part of her own sensuality. So is her physical enjoyment of sports such as batey.

2. Aud Torvigen in the suspense series by Nicola Griffith starting with The Blue Place and continuing with Stay and Always. Incidentally, my favorite book of the trilogy is the second. I just mention that because of the general assumption that second books are weak: of course they frequently aren’t weak at all and definitely not in this case. Anyway, Aud is very much a sensualist, though for her we see this less through food and more through her tactile and physical focus. Aud is an extremely physical person who simply pours herself into physical experience, whether this involves planing boards silk-smooth when building a house from scratch or dancing or fighting or sex. She is very much capable of living in the moment, which I think is also an important part of being a sensualist.

3. Julia in Theresa Romain’s charming, light, frothy Regency romance Season for Temptation. Julia is another girl who loves food, lives in the moment, is charmingly impetuous, and thoroughly enjoys life. Theresa Romain also managed to pull of a nearly unique trick: she wrote an explicit sex scene that didn’t make me skim lightly across it. 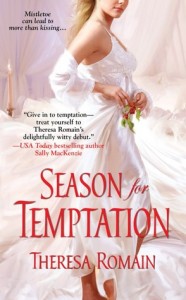 Okay! So that’s three sensualist protagonists. Oddly, they are all female. Surely there are male characters who are sensualists? Can you think of any others, male or female?

5 thoughts on “Characters who are sensualists”