So, the only thing I’d read by Elliot before was the Jaran quadrilogy. I read that series as the books were released, starting in 1992. I absolutely loved the first book and then liked the other three, but felt that the overall situation was not really resolved by the ending. Still, I’m surprised that I never picked up anything else by Elliot, who it turns out has written more than I thought.

Here’s a post where she lays out her books so you can see what all she’s written and which of her series might particularly appeal to you – my natural length is 120,000 words, give or take, but hers appears to be more in the neighborhood of 500,000 words. I wonder if she tends to have a clear idea of the whole outline before she starts a work of that length? It’s hard to imagine keeping that much in your head, I must say. 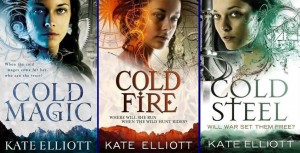 I enjoyed these books a great deal, and I’m glad I made time for a longish trilogy, even though I had to break in the middle to do revise Door Into Light. If you’re thinking of trying them, I strongly suggest that you get them in paper, at least one of them, because the map in the front is completely unreadable on a Kindle, and it is truly a most interesting map – I looked at it via the Take A Look feature on Amazon.

The map is so interesting because the alternate history is so baroque. Let me lay that out a little.

First, we are in the Gaslamp era, but also still in a heavily glaciated epoch. I believe ice stretches across a lot of what is for us the United States, though the map doesn’t show that. Deep history must be quite different in this world, because dinosaurs didn’t die out; in the Americas, troödons gave rise to the “feathered people,” just as in Africa apes gave rise to the hominids.

I have never seen such a fabulous nonhuman species in a fantasy series. Never. I just love how the feathered people are designed. They are so unhuman. Their underlying instincts are so clearly different from human instincts. The reader is not bashed over the head with this, the feathered people are a crucial but relatively small element in the book, but it is obvious. They are simply wonderful. So that’s one element – these sentient troödon descendants.

Second, waaaay back when (not sure how long ago, but a while), an important West African empire dug too far down in the salt mines and let loose the “salt plague” – at first the reader has no idea that this is a zombie element, and if zombies are a turn off for you, have no fear! You are not bashed over the head with the zombies, either. They are an important background element, occasionally brought into the foreground, but this is not by any stretch of the imagination a “zombie book”. In the Cold Magic trilogy, the historical importance of the salt plague is that it drove a mass migration from West Africa to Europe; the mages of both the African empire and the Celts found common ground and basically established a powerful empire drawing on both traditions. This gives us the main background culture for the story.

Oh, and third, the Roman Empire is still more or less a going concern.

And fourth, we wind up in the Antilles for quite a lot of the trilogy, where we find a quite distinctive civilization; the European colony city of Expedition exists at the edge of the Taino culture and features, by the way, a great creole type of language that must have given the copy editors absolute fits.

So the background is, as I say, baroque – and that’s before getting to the magic, though ordinary mortal magic is in fact quite straightforward in comparison, with cold mages and fire mages. One of the cleverest details is how the cold mages can’t walk by a fire without putting it out, and thus mage houses are heated via a Roman hypocaust system.

In addition to normal magic, though, there is the spirit world and the Wild Hunt and shapeshifting sabertoothed cats, not to mention the dragons . . . once again, baroque complications flower off in all directions.

Also I’ve left out the extreme tension between the mage houses and noble lineages who hold all the power, and the common people who are just at the edge of demanding legal rights. It’s like the peasants’ revolt in Britain in 1381 AD, only on a larger scale and with complications like the Napoleon-esque Camjiata, determined to conquer all of Europe and establish a new legal system, though he sure is determined to rule as Emperor himself no matter what he promises – he could be the scariest guy in the trilogy, though in such a civilized way.

So. That’s the background.

Now, the protagonist. What counts as epic fantasy for you? This is a big, complicated work, but we have exactly one pov protagonist, which means I’m not sure whether to call the trilogy “epic fantasy” or not. Also, the narration is first person, which also serves to give a more intimate feel to the story than I would generally think of for epic fantasy. On the other hand . . . the trilogy does “feel” like epic fantasy to me, more than anything else.

Though I don’t necessarily object to a clutter of pov protagonists, I did like Catherine Barr Barahel – Cat. Since the story is Cat’s, you have to like her voice or you won’t care for the trilogy. I did like her. She is one of the relatively few impulsive heroines who really works for me, probably because she is smart, brave, stubborn, and loyal. I also like how much of a sensualist she is – that’s relatively rare, I think, and it is a trait that helps the reader feel immersed in the world. For a while I did feel Cat was being pretty stupid about various things, but not (usually) so much so as to be really annoying, and anyway she can eventually accept the obvious when it bashes her over the head hard enough.

Cat’s story starts off like a YA story, and rather slowly. We see her world and family, and her cousin and best friend Bee (Beatrice) – the relationship between Cat and Bee is the most important relationship in the story. The story really starts when Cat is unexpectedly forced to marry a very powerful young cold mage, Andevai Diarisso Haranwy, who incidentally is enormously appealing, with his mix of vanity and confidence and insecurity. I’m sure you can see this coming, but of course Cat eventually falls for him even though at first she detests him.

And then we go from there, with the good guys getting together and being wrenched apart, and facing down villains, and basically trying to save each other and the world.

In some ways the villains are the best part — Camjiata with his suave, sympathetic conviction that he should be emperor; the master of the Wild Hunt with his inhuman detachment and casual cruelty; the mansa of Four Moons House with his certainty that people of good birth, like him, should naturally be able to dispose of lesser beings like villagers — he actually grew on me at the end; and of course the fire mage James Drake, who when we first meet him seems like a perfectly okay guy and then every. single. time. he reappears, he reveals himself as worse than we thought.

So. Here we have a story that opens slowly and then adds one complication after another, with important female friendships, important male friendships, complicated family relationships, angsty romances, good guys that you can root for even though they’re flawed, bad guys that you can love to hate, intelligent troödons, and complicated culture clashes. And dragons. If you’re in the mood for a fairly intimate-scale story told against a cluttered, ornate background, this might be exactly what you want.

If you’ve read this, what did you think?

My next Kate Elliot story will be the Crossroads trilogy, cause I picked up Traitor’s Gate somewhere and it’s sitting on my TBR shelves right now. It’s the third book, naturally, but since I have it, of course I’ll try the first book and then move on with the trilogy.

But first! Just got editorial comments back on The Mountain of Kept Memory, so, yeah, back to, as they say, the salt mines. That phrase is going to sound a little different to me now, after the salt plague…

3 thoughts on “Recent Reading: The Spiritwalker trilogy by Kate Elliot”