So, via twitter, I noticed this post at Random Musings: Authors I own the most books from. I’m sure . . . pretty sure . . . I’ve posted a similar list before, but my reactions to Brandy’s list were threefold:

b) Diana Wynne Jones, of course!

c) Authors can actually be on your list when you own fewer than ten books by them?

The thing is, I am the kind of reader who is an author’s best friend: a collector. Once I fall in love with an author’s work, I pick up everything by them even if I don’t expect to get around to reading the entire backlist all that soon. It is impossible for any author to be a “most shelf space” author for me with fewer than twenty titles. In fact, here are the twelve authors who have at least 20 books on my shelves (including virtual shelves, but all but one of these I own mostly in paper):

1. Dorothy Dunnett — 20. I own her Lymond series, her Niccolo series, and all her mysteries.

2. Terry Pratchett — 20, again. I have a lot of his as audio books, including most of the Vimes books and all of Tiffany series. They work better for me as audio than any other author I’ve tried in that form.

3. Martha Wells — 21. She is the only author on this list that I own mostly in ebook form. I have all of hers except the Raksura trilogy as ebooks. This is because I only discovered her work after I got a Kindle. Everyone else on this list, I’ve been reading for a lot longer.

4. Sharon Shinn — 24. I have those I prefer and those I like less, but basically I pick up anything Sharon Shinn writes. Jeweled Fire is one of my most-anticipated titles for this fall.

5. Steven Brust — 24. All those Vlad Taltos books add up, and I grab each one the moment it’s out, but I have most of his other books too, obviously.

6. Orson Scott Card — 25. In fact, I need to pick up the third Pathfinder book one of these days. Card seems to me to be rather uneven, but I really love some of his books. Enchantment is one of his recent titles that I thought was really good.

7. Rumer Godden — 26. This is the only literary author I have a lot by. She is such a wonderful writer. In This House of Brede is one of the most beautiful books I’ve ever read. I have quite a few of hers I haven’t read, though, because I didn’t want to read them all at once and run out, and because for me they’re better read one at a time. I need to bring one of hers upstairs so I will read it soon. 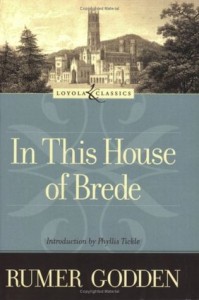 8. Diana Wynne Jones — 27. I think I’m getting pretty close to having all of hers, but some I have only read once and need to read again. Hexwood comes to mind.

9. Patricia McKillip — 27. I got rid of Solstice Wood, but basically anything she writes is likely to become an instant favorite of mine.

10. Ngaio Marsh — 29. My mother loves some of the older mystery authors and got me reading Marsh.

11. Barbara Hambly — 36. It’s such a high number because I really like most of her older fantasy AND her current mysteries and urban fantasy, plus I am counting the “Barbara Hamilton” historical mysteries. Every now and then she writes a book that doesn’t work for me at all, but mostly she’s one of my favorite authors.

12. And now . . . with twice as many books as any other author . . . *Drumroll* . . . CJ Cherryh — 70 titles. Wow. And that’s without the Rusalka trilogy, which I gave away. I am counting the shared-world Marovingen Nights collections, though.

So. Any of you have more than twenty books by a single author? Who?

20 thoughts on “Authors who take up the most shelf space”