So, via Twitter, I happened across this post by Jeff Somers at Barnes and Noble (and incidentally that link would not work from my phone, so B&N might want to figure out how to fix that). But good topic! Five “weird” fantasy worlds.

Now, I have absolutely no objection to a more generic setting. If it’s well done, I’ll love it, though I’ll particularly admire peculiar elements like the changing sky in Elizabeth Bear’s Range of Ghosts trilogy, not that the setting there was generic, but you get what I mean. But a more generic setting can showcase the writer’s skill in other ways. Nevertheless, I like the idea of compiling lists of truly unique settings.

Of course what caught my eye in this B&N list was the inclusion of the Raksura series, since anything involving the Raksura generally does catch my eye. The others: an interesting selection of brand-new to quite old titles:

Empire in Black and Gold, by Adrian Tchaikovsky, 2008

Under the Empyrean Sky, by Chuck Wendig, 2013

Updraft, by Fran Wilde, just out

Isn’t that an interesting selection? Of these, I have read Rider at the Gate and The Cloud Roads. I have Under the Empyrean Sky on my Kindle. I’ve read other stuff by Mieville and am automatically interested in his titles, but I must admit I don’t rush to read them. Some I’ve had on my actual physical TBR shelves for years (Un Lun Dun and Railsea). I’ve never heard of Empire of Black and Gold, but it sounds interesting, all these insect-people apparently. And I’m hearing lots of good things about this debut title by Fran Wilde, Updraft, and really think I must try it because it’s supposed to combine engineering with fantasy, which I would really enjoy.

But, now, weird settings? Not just nonstandard or nongeneric, but actually weird. What do you all think?

Of the lot, I think Under the Empyrean Sky sounds the least weird: 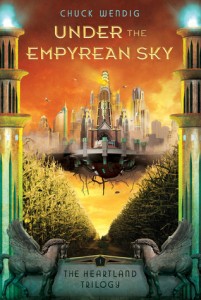 As captain of the Big Sky Scavengers, Cael and his crew sail their rickety ship over the corn day after day, scavenging for valuables, trying to earn much-needed ace notes for their families. But Cael’s tired of surviving life on the ground while the Empyrean elite drift by above in their extravagant sky flotillas.

It sounds to me a lot like, well, any dystopia. I mean, with flying cities, but still. I picked it up because I wanted to try something by Chuck Wendig and Blackbirds sounded waaaay too dark. Also, Under the Empyrean Sky doesn’t sound like fantasy; technically, it sounds like SF. Genetically engineered corn, stuff like that. Which is fine, but if we’re specifically looking for weird fantasy worlds, does it count? I tend toward No on that one. You can do a Weird Worlds in SF if you like, but then I doubt floating cities could possibly be enough to kick you over into outstandingly weird territory — all the far future stuff is much weirder.

Rider at the Gate . . . maybe. I know, I know, technically that is SF, too, but it feels and reads like fantasy, so never mind. CJC handles the telepathic horse thing very differently, but then telepathic horses — telepathic animals you ride, in general — are not exactly new in fantasy. Though I’m very pleased to see a twenty-year-old book get a nod. Yes, please, let’s not forget all the old titles!

Anyway, here are a handful of titles I would tend to nominate for weird fantasy settings:

1. The City and the City, by China Mieville. That setting really is unique. And definitely weird. I’m not 100% sure I believed in it, but I really enjoyed it, and the story, too. This book is what got me interested in Mieville in the first place.

2. Scar Night, by Alan Campbell. I didn’t like the book very much, but a city suspended by chains over a bottomless abyss is very cool.

3. The Shattered World, by Michael Reaves, published waaay back in 1984. An age ago, the world was broken in a great cataclysm; now people live on the fragments, flying between them in ships made of the skins of dragons. It is hard to get much cooler than that. In fact, it’s really tempting to steal that idea myself. Let’s have swan chariots that fly between worldlets, pegasi, I don’t know, the possibilities are endless.

4. On a lighter note, the Thursday Next series by Jasper Fford, especially One of Our Thursdays Is Missing, which brings the crazy Bookworld front and center. Not even Terry Pratchett came up with a world as weird as that.

5. Godstalk by PC Hodgell, with that layer of myth over the everyday world.

6. Speaking of layering myth over the real world, how about Snake Agent by Liz Williams, which layers heavenly and hellish dimensions over the “ordinary” world of Singapore Three. You aren’t going to find many more original settings than that.

7. Bright of the Sky by Kay Kenyon — sort of more SF, I admit, but with immense storm walls and neverending rivers and a sky of fire and all kinds of elements copied from our world by the people of an alternate universe. Very peculiar, original setting, even if it is SF more than F.

Not sure I can get to ten. What have I forgotten? Other very peculiar fantasy settings (or truly original SF settings, why not?).