Okay, did you see this one coming?

It’s dramatically more difficult to think of just-good-friends when you are trying to think of male-female friendships. In fact, one of the things I so disliked about Tana French’s IN THE WOODS was that she so successfully set up a just-good-friends kind of relationships between her protagonist (a guy) and his partner (a woman). And then ruined it by introducing a completely unnecessary sexual relationship.

Well, I guess it was necessary to ensure the protagonist completely ruined his life through his horrible decisions, if that was the goal.

It’s easier to think of stories like that, that introduce an unnecessary sexual relationship because the author seems to think Sex Is Required and Actual Friendship Is Impossible and all that sort of thing. Elaine T mentioned in the comments of an earlier post that some readers seem to really believe every friendship really ought to lead to a sexual relationship, and that certainly does sometimes seem true of authors. Here I am thinking of a book I liked a lot: THE GIRL WITH ALL THE GIFTS by MR Carey. I felt that the eventual sexual relationship between Miss Justineau and Sergeant Parks was gratuitous, unnecessary, and not really believable. It didn’t drive me wild because I didn’t think it actually hurt the story as was true for IN THE WOODS, but it seemed shoehorned in. No doubt other readers feel differently, but.

There are relatively few stories in which we do actually see friendships between male and female characters. I can think of just a very small handful; I hope you all will suggest others. Again, I am specifically looking for friends rather than relatives:

1. Shara and Sigrud from CITY OF STAIRS. There is no implication of any sexual attraction between them. They depend on each other, trust each other, all that good stuff, but friendship is as far as it goes. I hope it stays that way as the trilogy continues — and I think it will.

2. Piper and the guys in the contemporary FIVE FLAVORS OF DUMB by Antony John. This is a story that handles both friendship and family relationships very well — it reminds me of Melina Marchetta’s contemporaries. 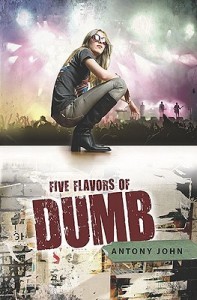 4. Wen and Justin in Sharon Shinn’s FORTUNE AND FATE, which incidentally is my favorite of the Twelve Houses books, also a kind of epilogue so not actually part of the main series. There is an important romance in the book (I mean, this is Sharon Shinn we’re talking about, here), but the friendship between Wen and Justin is important and one of my favorite parts of the story.

5. The last one I could think of was The Fionavar Tapastry trilogy by Guy Gaviel Kay, with Kim, Paul, Kevin, Jennifer and Dave. Their paths wove together and apart during the course of the trilogy, but the friendships between these five protagonists are of central importance and do not generally move into romantic relationships.

Five is a pretty tiny sample. Anybody have a suggestion for other examples of friendships between unrelated male and female characters in SFF (or other genres)?

10 thoughts on “Friendships across the gender divide”