So, the obvious companion to my earlier post about male friendships. I’m sure you all expected this, and now you undoubtedly all have titles to contribute in the comments, right?

For me, friendship and relationships other than romantic are often key to lifting a particular title out of the herd. Speaking of those male cousins in Laura Florand’s Rose series — which Elaine mentioned in the comments of the earlier post — it is indeed that set of cousins who make the romance series particularly appealing. Without them, the romance itself would fall flat, at least for me. The same is true of female friendships in other titles that feature a central romance.

So, for example, the very first female friendship that comes to mind for me is:

1. Daughter of Smoke and Bone by Laini Taylor. Of course I just read this trilogy, so it is still in the forefront of my mind, but the relationship between Karou and Zazuna was absolutely the high point of the story, far more so than the intense, obsessive romantic relationship between Karou and Akiva. Of course partly this is because Zazuna was my favorite character.

Um, not to nag, but have you all read Night of Cake and Puppets yet? Well, what are you waiting for? Seriously, go read that!

But moving on, moving on … other female friendships that particularly come to mind:

2. In the Spiritwalker trilogy by Kate Elliot, which I’m in the middle of right now, the relationship between Cat and Bee . . . I didn’t notice till this minute that those are both animal names; it’s Catherine and, I think, Beatrice, really . . . is of central importance. Love this relationship. Again, for me it’s more important than the central romance, though I do like that, too. You know, the romances tend to be so angsty compared to the friendships; probably that’s one reason I generally prefer the latter.

This series got great covers, an added perk: 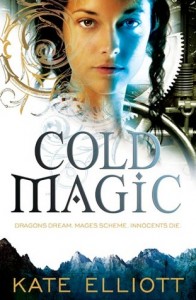 3. Sarah, Abalone,and Professor Isabella in Jane Lindskold’s Brother to Dragons, Companion to Owls. Listen, if you click on this link, you should be aware that this book has a TERRIBLE COVER that should not in any way put you off the book, which is great. This is SF rather than F, you may remember I reviewed this older title a little while ago.

4. Kate and Andrea in the Kate Daniels series by Ilona Andrews. This is one of my very favorite UF/Paranormal series, which I think really hit its stride with the third book. Although I love Kate, I am one of the readers who really liked Gunmetal Magic, the book in the series that focuses on Andrea. This is partly because I like Rafael quite a bit, but also because I like Andrea herself.

5. Stepping out of SFF, but I have to mention Melina Marchetta here, for all kinds of important friendships in her contemporary titles, such as Saving Francesca, which I definitely recommend if you like mixing the odd contemporary in with your SFF. Marchetta is unique for me because I prefer her contemporary fiction to her fantasy titles, so far anyway.

6. In that same context, Fangirl by Rainbow Rowell is another contemporary title with particularly good friendships . . . I am thinking here of Cath and Reagan, but the relationships between father and daughters, between sisters, between Cath and her boyfriend . . . all very well done; a real pleasure to read.

7. Okay, I’m listing this last because it contains a spoiler for The Thousand Names, so look away if you haven’t read that yet and want to avoid being spoiled, but:

Winter and “Bobby” in Django Wexler’s The Thousand Names. Also Winter and Jane, but I found “Bobby” particularly appealing for some reason.

11 thoughts on “Female friendships in SFF”