Or advanced Worldbuilding 202. What a fun topic for a top ten list: What ten books would you assign if you were teaching a class in _______.

Chachic picked Worldbuilding 101 and her selections are really interesting from my point of view, because first on her list is the Harry Potter series.

That would actually be a really good series to look at because of its weakness in worldbuilding as well as its strengths. Its primary strength: the clever details! Its greatest weakness: MAN, does the worldbuilding ever have holes in it as far as plausibility! In particular the complete separation between the wizard families and the muggles, the extreme ignorance of each other. That does not make the least bit of sense, not just because after all they all live in the same region, but also because muggle families can produce wizard children. For a class, well! You could totally have a great discussion about plausibility in worldbuilding — does it matter? When doesn’t it?

Chachic also selected The Lord of the Rings, and that’s such a great contrast in terms of utterly tight, consistent worldbuilding. Of course you could hardly talk about Tolkien without talking about his use of language to enhance worldbuilding — the casual speech of the hobbits compared to the extreme formality of some of the other cultures. Oh, and the speech of the orcs! Language and day-to-day detail and deep consistency, that’s TLofR.

One more I want to mention — Chachic also selected Andrea K Höst’s The Touchstone Trilogy, and I thought of that right away for worldbuilding. I think the extrapolation of the social connectivity trend of the modern world is SO WELL DONE in that trilogy and I would love to include it in a Worldbuilding class.

Now, Maureen at By Singing Light did a list for Worldbuilding 202 — Advanced Worldbuilding — and I really like her picks a lot and very much agree with them. (And want to read the ones I haven’t yet.)

I noticed right away that she picked the Medair duology by Andrea Höst — that is indeed the other one of Höst’s I would think of for Worldbuilding, though I’d come down for Touchstone personally.

Then Maureen also includes CJC’s Foreigner series. OH YES. You could NOT pick a better work if you wanted to look at deep worldbuilding. Also Addison’s The Goblin Emperor, and again I am so there for that one, obviously. Another perfect choice for the Advanced Worldbuilding class.

Maureen suggested Wells’ Wheel of the Infinite. I don’t disagree, but I would have to flip a coin between that and Death of the Necromancer and the Raksura series. It would be tough not to assign all three.

The single work that instantly sprang to mind for me that was not on either list was Elizabeth Bear’s Range of Ghosts trilogy. Bear does a fantastic job designing that world, drawing on Tibet, China, all kinds of influences. Brilliant work. 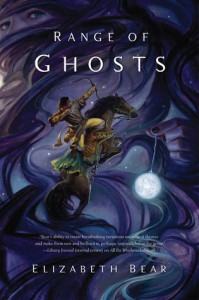 And you know, you can really offer a Worldbuilding: UF class as well, because the secret history / alternate history involved there is so distinctive, too. Contemporary-but-with-magic, contemporary-but-with-vampires. Authors do everything from really detailed, carefully-thought-out history (Snake Agent by Liz Williams) to almost pure handwaving (The Others series by Anne Bishop) to build those worlds. Both methods can work, but they work in such different ways.

What springs to mind for you when you think of really excellent worldbuilding?