So, a few days ago . . . weeks, maybe, I lose track . . . I happened across this post by Rupert Wallis on friendships between male characters –in kid’s stories,mainly, though there are also some suggestions for older readers.

I’d only read one of these works myself: Roald Dahl’s Danny, Champion of the World, which I loved, for all the reasons given in Wallis’s post. That one is a dad-son relationship, really well handled. It can be hard to find central parent-child relationships in MG and YA, I think, largely because if you’re going to give the kid the job of saving the day, you have to have some reason the adults can’t handle it, so removing parents completely or fading them into the background is one popular method of seeing to it that the kid stays front-and-center.

It’s interesting to me that Wallis wrote this post, because his newest book — All Sorts of Possible, which is a great title — seems to set up a situation where instead of a central relationship between father and son, the father is apparently removed as an active character. I know this because I looked at the summary on Amazon. I looked on Amazon because this book has the worst ever summary on Goodreads (it has essentially no summary at all so you can’t begin to guess even what genre the book is.) Here’s what Amazon says:

When the sinkhole opened there was no time to brake or turn the wheel and the old green Land Rover was snatched off the dirt road over the smoking rim. The moment that a sinkhole swallows the car Daniel and his father are travelling in, everything changes: suddenly Daniel is the ‘miracle boy’ who escaped unharmed and his father is gone, trapped in a coma with no sign of recovery. Everyone wants to know the secret to Daniel’s escape, including a Mason, a gangster who believes that Daniel is special and can help him secure the biggest score of his career…whatever it takes…But is Daniel really special or just lucky? And can he use whatever other’s think is within him to help his father? A lyrical and atmospheric novel from the phenomenally talented Rupert Wallis about love, loss and learning to accept the world for what it is, not what it could be. Perfect for fans of Patrick Ness and David Almond.

I’m not at all sure this sounds like something I would like; also, the summary is perhaps not as well written as it could be, because honestly, people do survive all kinds of accidents and I’m not sure why Daniel’s survival of this particular accident was so striking.

Also, all this immediately makes me think about exceptions where the parent-kid relationship is particularly well done. Well, maybe later. Right now I want to extend the “male friendships” idea and extend that into SFF, which Wallis did not. I was trying to stick more to unrelated guys, not brothers or whatever. Here are some of the titles that come to mind when I think of particularly well-done male friendships in SFF, in the order I thought of them:

1. Shaun David Hutchinson’s The Deathday Letter , with a teenage boy protagonist sorting out his life when he knows he has 24 hours to live.

2. Richard Adam’s Watership Down, with Hazel and Bigwig and Fiver and the rest. Really hard to beat.

3. Sarah Rees Brennen’s The Demon’s Lexicon series. I’m not thinking of Alan and Nick here, although their relationship is central and extremely well done. I’m trying to think of friends rather than brothers, so in this case I’m pointing out Nick’s relationship with Jamie, which is developed wonderfully in the trilogy.

4. CJC’s Fortress in the Eye of Time series. I’m thinking of Cefwyn and Tristen, of course; also Cefwyn and his brother.

5. Scott Lynch’s The Lies of Locke Lamora series offers one of the most central male friendships I can think of in SFF, between Locke and Jean, of course.

6. Gillian Bradshaw’s Cleopatra’s Heir — this one is the first one I thought of when I stopped thinking about brothers and starting thinking about the father-son relationship. Of course they’re not actually related — that would kind of destroy the entire premise of the book — but the relationship between Caesarion and Ani is very much a son-father type of relationship, as well as absolutely central to the story.

7. And one more, also unrelated but very much a son-father relationship — I’m a sucker for that trope, apparently — Moon and Stone from Martha Wells’ Raksura series. As far as I’m concerned, one of the best scenes in the whole series is when Stone arrives at Opal Night. Also, Wells has been blessed with the best of all possible covers for her Raksura series: 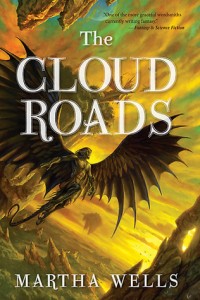 You all do know that we’ve got two more Raksura books on the way, right?

UPDATE: Lots of good suggestions in the comments. Also:

How can I not have remembered the guys from The Raven Boys by Maggie Stiefvater? Oh, well, I suppose it’s because I’m waiting to read the rest of the series until it’s complete. But still.

Stepping outside SFF, it occurs to me that Benjamin January / Hannibal Sefton / Abishag Shaw from the January mystery series by Barbara Hambly offer one of the best examples of male friendship I can think of.

10 thoughts on “Male friendships in fiction”