No award won a bunch of stuff; I expect you’ve all heard about that by now. Not a surprise, not a surprise. Not a foregone conclusion, either. I’m confident no one really knew what this year was going to look like till the votes were actually counted.

I read a ton of posts and comment threads during the month or so leading up to the actual awards — I mean, I followed File770 and read a whole bunch of the linked posts and their various comment threads, Scalzi, GRRM, Vox Day, all of ’em. Thus I am a bit burned out on drama at this point, and no doubt that’s one reason I *particularly* appreciate Chaos Horizon for offering analysis of the votes without embedding it in a morass of emotional reaction, and if that sounds like what you’d like too, after the peculiar, tense, highly emotional Hugo phenomenon this year, then here it is: preliminary analysis of the voting. I rather think I will avoid all Hugo posts for the rest of the year other than the ones on Chaos Horizon, because, yeah, burned out.

Anyway! Three-Body Problem by Cixin Liu won Best Novel — I’m sure you all know that already. 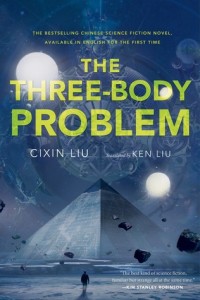 Of course I’m disappointed that “Katherine Addison’s” The Goblin Emperor didn’t win because I *so* wanted it to, and it clearly would have, incidentally, without the Rabid Puppy voters. I mean, it lost by only about 200 votes. Well, at least a whole lot of people liked it, so that’s good. I notice on Goodreads that TGE has 1400 reviews and TBP has 1100, and they’re just about tied for ratings, so a lot of people clearly like both. Not the same people, I would be willing to bet.

Well, I’m glad TGE won the Locus first for the Fantasy category earlier this summer. That does make me feel a little better.

Now, I should add, although Three-Body Problem didn’t really work for me, I think it was a good choice to have on the ballot and I think it’s a worthy winner, too. Ambitious, wide-ranging, thought-provoking, it had a lot going for it and I see why a lot of people voted for it. I would have particularly been interested to see what happened with it if it had been up against Weir’s The Martian and Cambias’s A Darkling Sea as well as Ancillary Sword, maybe a couple of other SF titles that I am not thinking of off the top of my head — what I mean is, set TBP against other SF, remove the fantasy titles, and then what wins? Physics, nuts-and-bolts engineering, sociology; near-future or far-future; something more literary or something more space opery? Something that emphasizes characterization or something that honestly makes characterization a complete afterthought?

Wouldn’t that be interesting?

Actually, and I do not want to get into the name-calling and accusations and straw men and all that, but you know how rather frequently during the Hugo mess someone said something on the order of, “Start your own damn award then!” And I don’t necessarily think that’s a great idea, nor do I have much of a notion how anybody would get a new award off the ground (get ComicCon to run it, maybe, since isn’t that the biggest convention these days?), nor is this directly relevant to the Puppy controversy, but setting all that aside, I wouldn’t mind seeing an SF-only award — I say this as someone who reads a lot more fantasy than SF, btw. You know the Locus separates SF from F and I do think that’s a fine notion. Then we could all argue about whether a given work is actually SF or fantasy, which would be way less stressful than arguing about politics and conspiracies and hurling accusations of the worst possible motivations at everyone in sight.

Well, well, I doubt anybody will start a new award regardless. What I would like to see for the Hugos next year is a lot of very active readers plugging very different lists of recommended works. I expect we’ll actually see slates, probably more than one, and I expect the supporters of every slate will promote theirs as The Right Slate That Showcases The Right People and the others as Immoral Bloc Voting and it will all be violently dramatic again, alas. Incidentally, as far as I’m concerned, fan clubs that vote in lockstep without declaring publicly that they’re voting for a slate are still voting for a slate, and the single thing I want to see least is one author receiving (or accepting) more than *at most* two nominations.

By the way, I expect I will have works eligible next year for all four categories, and I would be more than happy to demonstrate that I *really mean this* about not accepting more than two nominations. Feel free to contribute to a Make Rachel Prove It voting campaign.