At Skiffy and Fanty, an intriguing review of a four-book series by Mary Gentle that I hadn’t heard of but that’s been out for some time:

In our world, the duchy of Burgundy, the Middle Kingdom, has had a fascinating, and often strange history. Wedged in the middle of Europe, from the Mediterranean and up toward the North Sea, parts of which are now France, Switzerland, Germany and Belgium, the Dukes of Burgundy have often been as powerful or more powerful than some of the full blown kingdoms they have dealt with. … By accidents and turns of fortune, Burgundy disappeared from our history in a rather sudden fashion.

That sudden disappearance of Burgundy from history is the historical seed for Ash: A Secret History by Mary Gentle. 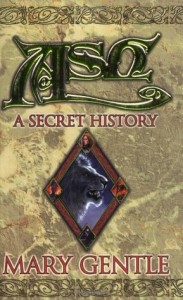 I’m not sure I know enough about enough about real history to get the most out of this alternate history . . . in fact, I’m sure I don’t . . . but according to this review, “We are dropped into this 15th century that, even with the framing device of the book being an academic work, slowly reveals just how strange and wrong this 15th century is compared to ours. By the time the reader is fully into the first movement of the book, the fact that this 15th century is definitely not the one we remember becomes inescapable.” Hmm, this does sound intriguing.

The only book by Mary Gentle that I ever read was RATS AND GARGOYLES, and I guess I didn’t much care for it because it doesn’t seem to have stuck with me.

On the other hand, this ASH quadrilogy does sound like my kind of thing — here’s the Goodreads summary:

For the beautiful young woman Ash, life has always been arquebuses and artillery, swords and armour and the true horrors of hand-to-hand combat. War is her job. She has fought her way to the command of a mercenary company, and on her unlikely shoulders lies the destiny of a Europe threatened by the depredations of an Infidel army more terrible than any nightmare.

There are definitely tropes I like in this one, sounds like. Also, wouldn’t it be interesting to compare this work with Django Wexler’s THE THOUSAND NAMES?

Has anybody read this? Or other books by Mary Gentle? What did you think?

9 thoughts on “If you’re into alternate and secret history —”