I see that Sherwood Smith has a recent post at Book View Cafe on resolutions and the sorts of things that readers find unsatisfying when finishing a book.

Of course she notes that an ending that some readers find unsatisfying in a throw-the-book-across-the-room sort of way is perfectly fine with other readers. But one can still check out the general sorts of payoffs (or lack thereof) that tend to disappoint readers. And I totally agree that many (most) readers prefer an ending that provides “…that hitch of the breath, the lift of the heart that one gets from a satisfying resolution.” Yes. If you haven’t read Tolkein’s essay “On Fairy Stories,” linked from Smith’s post, you totally should.

For me, the most interesting insight in the post is here:

That’s something to think about.

As an example, Smith notes: The author might feel that tremendous weight of stress writing the details of that mega-battle, but a reader, who has followed the series faithfully through several previous megabattles, blinks through the superlatives, and might even begin to skim. The reader’s emotion doesn’t match the writer’s.

This is precisely true for me: I would be one of the readers just skimming through that immense battle.

Then we get a good bit of discussion in the rest of the post and the comments about what actually works best in providing a satisfying resolution: the protagonist gaining agency or insight, the tying-up of loose ends (for mysteries), the male and female leads living happily ever after (romances), and so on.

I — and some commenters — also prefer a story where the resolution offers cosmic justice. As Pilgrimsoul said in an August 16th comment: I want the good to end happily and the bad unhappily. Exactly. For me, saccharine endings aren’t necessarily great, everything working out too perfectly isn’t ideal, but basically I want the good guys to wind up in a better place than they started, the world to end up better off because of the events of the story, and the bad guys, if any, to actually be defeated.

All this has made me think of various stories that did NOT provide resolutions that satisfied me, in very different ways:

1. IN THE WOODS by Tana French. For me, this beautifully written book failed utterly at the end because a) it is supposed to be a mystery, but left very important loose ends just flopping around; and b) the protagonist screwed up his life thoroughly and never got it unscrewed; and most of all, c) there was no cosmic justice. The (very bad) bad guy got away with the murder and went off to no doubt be completely vicious elsewhere.

For me, this made Tana Frence a one-book-only author. If someone offered me another book by her for free, I would not just walk away, but run.

This doesn’t make me run away from Turtledove. It makes me ask myself what in the world he (or his editor) could have been thinking.

Sherwood Smith gently points out how readers sometimes feel like they know what was in the author’s head: Then there’s the reader telepathy into the writer’s real motivation: “Obviously the author was sick of the whole thing and just phoned in that ending.” Well, from time to time one certainly does get that exact impression. It’s books like Turtledove’s which most promote that feeling. It feels exactly like he just lost interest, threw a period in at a random point, and said, “There! That’s the end!”

3. Live, Die, Repeat. I really enjoyed this movie! But the ending was . . . just okay for me. This is an example of a resolution that seemed . . . a little too pat. A little too happy, with all of the cost the good guys paid for the ending just . . . erased. As far as I’m concerned, this made it difficult to see either a dramatic catharsis or an emotional catharsis in the resolutiion. Don’t ask me what I’d have preferred, though. An unhappy ending, no, definitely not.

In contrast, let me just say that I consider the last line of Patricia McKillip’s THE BOOK OF ATRIX WOLFE to offer one of the all-time great endings for any story ever. 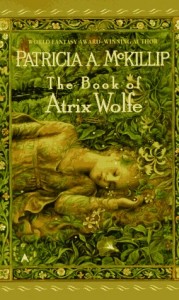 I will just add that you can’t skip ahead and read that one line, though. The impact comes from the story.

So. Have you all read anything lately which had an ending you particularly loved or hated?

16 thoughts on “Resolutions: the payoff at the end of the story”