Via tor.com, I see that Tim Powers has new book due out next January: Medusa’s Web. 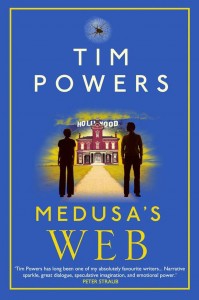 Now, Tim Powers is one of those authors whose work I really admire but don’t really like.

Wait, that’s not right. Let me try that again.

I really like Tim Powers’ books while I’m reading them. But they are hard for me to pick up and I don’t usually feel much inclined to re-read them. Even though if I DO re-read one, I like it a lot. I somehow never remember liking his books as well as I actually do like them. Peculiar, I know, but there it is. I can’t offhand think of another author who strikes me quite this way.

But I do think Powers is a fine writer, one of the great fantasy authors of the modern era.

In the wake of their Aunt Amity’s suicide, Scott and Madeline Madden are summoned to Caveat, the eerie, decaying mansion in the Hollywood hills in which they were raised. But their decadent and reclusive cousins, the malicious wheelchair-bound Claimayne and his sister, Ariel, do not welcome Scott and Madeline’s return to the childhood home they once shared. While Scott desperately wants to go back to their shabby south of Sunset lives, he cannot pry his sister away from this old house that is a conduit for the supernatural.

Decorated by bits salvaged from old hotels and movie sets, Caveat hides a dark family secret that stretches back to the golden days of Rudolph Valentino and the silent film stars. A collection of hypnotic abstract images inked on paper allows the Maddens to briefly fragment and flatten time—to transport themselves into the past and future in visions that are both puzzling and terrifying.

As Madeline falls more completely under Caveat’s spell, Scott must fight to protect her. But will he unravel the mystery of the Madden family’s past and finally free them… or be pulled deeper into their deadly web?

If you read this before I do, very likely for some of you (Hi, Craig!) let me know: horror or dark fantasy?