You remember this self-published fantasy challenge? It’s moving along toward a final winner as the bloggers participating begin to pick finalists.

Here is Fantasy Book Critic’s top three picks. The one Mihir Wanchoo is sending forward to Round Two is a book called UNDER A COLDER SUN — good title — by Greg James.

The summary for this title says:

Khale the Wanderer: dark warrior of legend, a reaver with a demon’s soul.
King Alosse: ruler of Colm, willing to risk everything to save his city and its people.
Princess Milanda: an innocent, kept pure since birth, unknowing of her fate.
Neprokhodymh: the cursed city of sorcerers where Khale must make a choice that will scar him for life, or fall into darkness forever.

But it also suggests this is a grimdark story, so probably not for me. It is free on Kindle, though, if it sounds like your kind of thing.

Bob R Milne at Beauty in Ruins listedfour finalists and then selected SHATTERED SANDS by William G Saraband as his finalist.

Here’s a bit from the Amazon summary:

For years, Tamazi felt she was nothing like the other slave-girls. It was not until her master disappeared, the Great Vizier of the desert kingdom of Rilmaaqah, that a power older than the sands themselves took hold of her; a power that could finally free her, or enslave her forever.

This distinguished itself from the first page. The characters were fantastic, full of both personality and surprises, and the world-building was solid, especially in terms of establishing a culture. If there’s any drawback, it’s that the story is so ugly and cruel that it makes for rather heavy reading at times.

So that leaves me kinda thinking, shoot, somebody select something a bit less ugly and cruel, please, because I just don’t care whether the story distinguishes itself from the first page with that comment in there.

Sarah at Bookworm Blues gives her top five choices here and selected BLOODRUSHby Ben Galley to send on to Round Two.

This one hit all the right notes, with fantastic world building, a captivating story, unforgettable characters, and a plot that refused to fit in any molds. The cover art was amazing, the editing was obviously professionally done and the author has very evident talent. Most importantly, it stuck with me long after I finished reading it, and I’m incredibly anxious to read the other books in the trilogy, and explore more of what Galley has written.

And at Amazon, the summary includes this bit:

When Prime Lord Hark is found in a pool of his own blood on the steps of his halls, Tonmerion Hark finds his world not only turned upside down, but inside out. His father’s last will and testament forces him west across the Iron Ocean, to the very brink of the Endless Land and all civilisation. They call it Wyoming.

Which is catchy, I will say. This is apparently a darkish fantasy, also a Western. Not many Western fantasies out there. I can think of only two offhand: TERRITORY by Emma Bull and THIRTEENTH CHILD by Patricia Wrede. I really enjoyed them both, but two is perhaps not enough to indicate a trend. BLOODRUSH is a dollar at Amazon, I see. I need to take a closer look at it.

Ria at Bibliotropic is sending Barbara J Webb’s CITY OF BURNING SHADOWS to the second round. Here is Ria’s review of that one. Evidently this one is noir-ish in tone.

Fantasy Book Review selected WHAT REMAINS OF HEROES by David Benem to go on to the second round. That title sounds grimdark, but the Goodreads summary implies it might be dark fantasy, not grimdark:

Lannick deVeers used to be somebody. A hero, even. Then, he ran afoul of the kingdom’s most powerful general and the cost he paid was nearly too much to bear. In the years that followed, his grief turned him into a shadow of his former self, and he spent his days drowning his regrets in tankards of ale.

But now an unexpected encounter casts Lannick upon an unlikely path to revenge. If he can just find the strength to overcome the many mistakes of his past, he can seize the chance to become a hero once more.

If the protagonist overcomes his past and becomes a hero, then this probably isn’t grimdark.

And one more: Tyson at Speculative Book Review is sending SOUL FOR TROUBLEe by Crista McHugh on to Round Two.

This one sounds lighter and more fun than some of the others:

Arden Lesstymine (known to everyone as Trouble) likes attention as much as the next girl, but this is getting ridiculous. When an insane stranger is murdered at the inn where she works, Trouble becomes the next Soulbearer for the disembodied god of chaos, Loku. Yes, it comes with the ability to channel the god’s limitless power, but at the cost of her sanity — literally. Now she has a sexy but cynical knight claiming to be her protector, a prince trying to seduce her to his cause (and his bed), and a snarky chaos god who offers a play-by-play commentary on it all, whether she wants to hear it or not. To make matters worse, a necromancer wants to capture the soul of Loku for his own dark purposes, and the only way he can get it is by killing her first.

Incidentally, I note that this one is also available for free on Kindle. Given Tyson’s comments about it, I went ahead and picked it up. 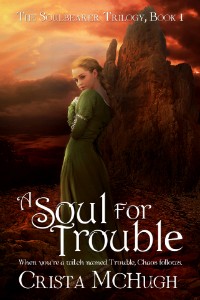