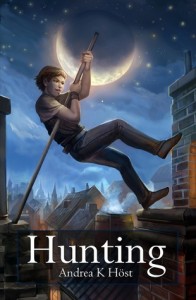 Is this a YA or an adult story? If you’ve read it, what do you think?

We have a great protagonist, Ash, who is a girl disguised as a boy, a trope I always enjoy if it’s well done. Except she’s not a girl, really. She’s young, but she’s an adult woman.

What I like best about Ash: her adult-ness. She can pretend to be a teenage boy quite well, but then she can pretend to be practically anything — she’s a social chameleon, good at observing the social milieu and adjusting her own behavior to get everyone else to do what she needs them to do. She’s not mean about it, but she’s definitely manipulative.

That’s not what makes me declare that she’s an adult, though.

Ash is not just good at sliding into and out of social groups, she’s also good at setting aside her own feelings in order to pursue a goal. Not only that, but if she starts to get angsty, she cuts it off and takes decisive action instead. Not only that, but she automatically moves to protect others, especially children. And not only that, but that scene where she is maneuvering the Rhoi’s heir out of his new fear of heights, that is totally an adult interacting with a boy.

Mind you, I love Ash. But she doesn’t strike me as a YA heroine.

Thornaster is an excellent male lead and his reaction when he finds out Ash is actually a woman is perfect. It’s entertaining how little the revelation matters, in fact; this is one book where it’s not a disaster for the girl to be unmasked. Not only is Ash perfectly capable of dealing with the fallout and anything but emotionally overwhelmed by being revealed, but also she’s surrounded by people who are surprised, but who handle it. I liked this, because I almost always enjoy competent protagonists and dislike angst. But it’s an unusual treatment of the girl-passing-as-boy scenario.

The metaphysical background is the other thing I particularly liked in this story. The stars really are gods, the Sun and the Earth really do bring forth life in a very direct way, it’s all ornate and interesting. I like the butterflies and moths, and *naturally* I particularly like the phoenixes.

I will say, the clutter of names and titles at the beginning could be confusing. Also, this is one murder mystery where a lot of motivations are left dark. Was it *all* mind control weirdness or did some of those people know what they were doing? Why and how did the main bad guy survive? What *about* the mage who was killing herbalists, where did she come from and why did she get involved? She didn’t seem to get a lot out of her presumed deal with the bad guy. I actually felt quite sorry for her, not to mention that the motive for killing the herbalists in the first place seemed thin to me. Also, the final resolution of the problem seemed unduly brisk and simple, though I suppose having gods on your side would be helpful at those moments.

So I’m not sure I would say this is a story to read for plot. If that’s the main thing you enjoy, this one might not be your favorite. But Ash and Thornaster are delightful, watching their relationship develop is a pleasure, and I will certainly be coming back to re-read this one again.