Also, Days of Blood and Starlight and Dreams of Gods and Monsters.

The first book, Daughter of Smoke and Bone, has been sitting on my TBR shelves roughly since it came out, which is to say, for several years. 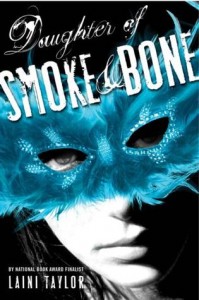 I’d heard lots of good things about it, but then a) it was the first book of a trilogy and I wasn’t that interested in reading it till the series was complete; b) though everybody seems to love Daughter, reactions to the other two books in the series were mixed and that put me off starting the trilogy at all.

I mean, here is Chachic’s review of Daughter. And here are her reviews for Days and Dreams. And if you read through other reviews at Goodreads or wherever, you will see that this is not an unusual reaction to the various books in the series. Why, I might never have tried the first book at all if anybody had warned me there was a tremendous cliffhanger of an ending.

Warning: The first AND the second books both end with tremendous cliffhangers.

However, having read the full series, I have to say, I’M SO GLAD I WAS NOT SCARED AWAY FROM THIS SERIES, because it is wonderful.

So. Let me unpack this trilogy a little.

Also, the setting – Prague – is so beautifully drawn. Loved it.

So, Book One establishes the characters, sets up the world(s), answers (most of) the mysteries, and crushes the reader beneath the hammerfall of tragedy. Then it ends on a cliffhanger.

The characters: I love Karou, Akiva is all right, the insta-love thing could be awful but Taylor does manage to pull it off. And then we get a whole list of secondary characters, all of whom come to life on the page. I loved Brimstone, I was totally creeped out by Thiago, and of the whole set of characters, Zuzana is my absolute favorite.

The first book is mainly from Karou’s pov. As the trilogy goes on and we accumulate more secondary characters, Taylor pretty frequently switches from one pov to another, using this mainly to build tension. I said that the first two books end on cliffhangers, which is true, but in fact many, many chapters end on cliffhangers. Taylor does an amazing job with tension – this whole trilogy is a compulsive page-turner.

2. Days of Blood and Starlight is not a mystery. The reader knows what’s going on, or thinks she does, which makes this a grim slog through a horrible situation. The first third of this book, maybe a bit more, was really tough to read. Karou, crushed by the horror of events in the first book, flounders ineffectually for quite some time. Thiago is a really competent, creepy, manipulative son of a bitch, so the reader can be appalled at Karou’s feeble attempts to get control of her life back from him, but still sympathize because really, she is genuinely stuck in a pretty terrible situation. Also, she is horrified at her own ineffectuality, which helps the reader tolerate it.

Then – and this is important – Taylor starts to redeem the situation. Nonspecific spoiler: The terrible things that were revealed in the first book truly were terrible, but, it turns out, generally not as utterly, irredeemably terrible as we were led to believe. Where the series looked a lot like it was going to turn grimdark, in fact it does not. Not even remotely.

What happens with Thiago is fantastic, in the cosmic-justice sense of believable and satisfying. A great secondary character, Ziri, gets a chance to shine. Many other characters deepen and start to change shape before the reader’s eyes, especially Liraz, who became another favorite of mine. Zuzana thankfully remains an important character. Everyone takes decisive action and . . .

Things go wrong and there is another brutal cliffhanger.

3. Dreams of Gods and Monsters was much easier to read than the early part of the second book. By this time, the reader should be trusting the author to get the most terrible things to work out in ways that are not *so* terrible. This trust pays off, fortunately.

I got the impression from various reviews, including Chachic’s that in the third book Karou and Akiva might take a back seat to new characters. This shows how important the first few pages of a book are, because it isn’t true, but the third book does open with a brand-new character, Eliza, and I guess some readers were really not happy about that. I do wonder if Taylor knew about Eliza when she started writing the trilogy, and my feeling is she did not, or she would have worked her into the story in the first couple of books.

Anyway, Eliza probably takes up less than 5% of the third book. The focus is still very much on Karou. Also Akiva, Zuzana, Mik, Ziri, Liraz, etc. Again, for me, the secondary characters tend to steal the thunder. Karou is fine, but the whole bit that deals with Zuzana and Mik rescuing Eliza from madness is excellent. So is the moving scene where Liraz rescues Ziri.

There are many, many great details as we move toward the ending of the story. The way Karou and Akiva deal with Jael is brilliant. What happens to Esther is another major example of cosmic justice. I saw that thing coming with Liraz, but I was so rooting for that resolution, it was deeply satisfying when it happened. And then the entire story ends up at a good place. Some reviewers comment that it is not a simple happy ending. Well, it pretty much is, actually. Sure, we can see a non-peaceful future for our main characters, but it is a *bright* future – and the peaceful interlude they’re getting now, in which to re-build the world, provides a satisfying resolution to the trilogy.

Flaws: Okay, I must admit that Taylor, toward the end, gets the story to work out via background information that she delivers to the reader in what can only be described as infodumpy passages – there isn’t much clumsy writing in this trilogy, but background infodumps are not my favorite thing. Efficient, though, and I suppose Taylor did not want to write another fifty pages to work in the background.

Also, Eliza and the Stelians were pretty much deus ex plot devices, especially in one particular scene. Taylor did work them into the plot pretty well, especially the Stelians. But still. I do suspect she came up with a lot of this backstory after the fact and plugged it into the third book in a more heavy-handed way than would have been necessary if she’d worked it in better from the beginning. Since when I write a book, I seldom know where I’m going myself, I can sympathize. But still, that’s my impression.

And . . . that’s about it for flaws. Wonderful series, just don’t stall out during the grim beginning of the second book.

You know how I said Zuzana is my favorite character. Well, Taylor also wrote a little novella featuring Zuzana and Mik, Night of Cake and Puppets, which is available for a buck at Amazon. It is set within Book One, happening concurrently with some of the events in that book, but can certainly be read at any point, including before you read the trilogy at all. If you are sort of hesitating over trying the trilogy, I strongly, strongly suggest you read this novella and then decide.

Cake is a romance, but about as far from a goopy romance is you can get. If you are not a fan of romance in general, don’t let that put you off.

4 thoughts on “Recent Reading: <em>Daughter of Smoke and Bone</em> by Laini Taylor”