Elaine T mentioned Cordwainer Smith in a recent comment, and you know, it made me realize that he belongs to the broad category of Authors Who Unfortunately Wrote Just A Few Books.

It’s a shame how some fine authors write just one or a few books and then vanish from the scene for one reason or another. Here are a handful of authors I wish had a backlist about an order of magnitude greater than actually exists:

1. Cordwainer Smith, actually Dr. Paul Linebarger, wrote peculiar stories set in a peculiar far-future. His stories are simply not like anything else in SFF. At the time he wrote them, they were unique; today, they are still unique. Mostly they were shorter works, though NORSTRILIA was novel-length. It’s a real tragedy that he died young, having written just that handful of stories and single novel.

2. Doris Egan. She wrote the Ivory trilogy, which I love, and CITY OF DIAMOND (as Jane Emerson), which was far from flawless — it has a kitchen-sink clutter to it — but which I also love. There was plenty of room in both worlds to go on and I very much wish she had, but she switched to writing TV shows instead.

3. Janet Kagan wrote the Star Trek tie-in novel UHURA’S SONG, one of my great favorites; also HELLSPARK and MIRABILE, both of which I loved. Unfortunately she did not go on with her writing career and then passed away in 2008.

4. Emma Bull. I know, I know, she participated in the Shadow Unit shared world stories, along with Elizabeth Bear and Sarah Monette and others. The first book in that series is free, by the way. I really enjoyed that series, but I would love to see Emma Bull go on and write some more actual novels. I really enjoyed WAR FOR THE OAKS, which I see now has a contender for Worst Cover Ever: 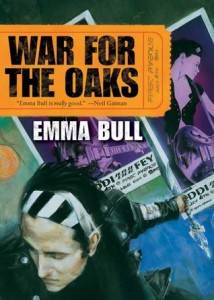 Who in the blazes came up with that cover for WAR FOR THE OAKS? Man, that’s bad.

Also, I wonder if Bull will ever actually write the other half of TERRITORY? Cause along with McKinley’s PEGASUS, that is the unfinished duology I would most like to see finished.

4. Barry Hughart. BRIDGE OF BIRDS and its two sequels are so charming, but I believe I heard that he simply felt he was done writing after that one trilogy. What a shame.

5. Zenna Henderson. Such charming stories. Alas, she only produced a relative handful of stories. They’re all short work, but mostly linked.

6. Joy Chant. I really enjoyed RED MOON AND BLACK MOUNTAIN, a rather odd but very lyrical portal story. Chant wrote a few other books, too, but this was my favorite.

7. Marta Randall. She wrote half a dozen or so novels. THE SWORD OF WINTER was my favorite of hers.

8. I’m not going to get quite to ten, but the final author I’d just like to mention is . . . Jane Austen. If her life and publishing career had not been cut tragically short, just think how many more books of hers would now be on our shelves.