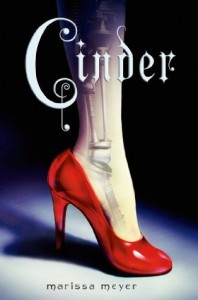 Nice cover, nice conceit — a retelling of Cinderella, in a futuristic SF world where Cinderella is a cyborg and cyborgs are terribly discriminated against. The setting is New Beijing and the main obvious source of conflict is Cinder’s fear of being judged as a cyborg, the second obvious source of conflict is a terrible plague, and the true main conflict involves a plot by Queen Levana of Luna, who has this clever and complicated plot to take over New Beijing and probably conquer all of Earth.

So, cyborgs, robots, plagues, psionics and mind control, secret plots, mad scientists, the handsome Prince Kai, the evil stepmother . . . it did not really do much for me. In fact, it’s taken me practically half the summer to listen to it all the way through, because a good bit of the time I preferred to just listen to the radio while driving or pulling weeds.

This surprised me. This book was quite a hit, got a lot of buzz when it came out in early 2012, and has gotten plenty of good reviews on Goodreads, including from people whose taste I generally find congruent with mine.

The review on Goodreads that I find myself wanting to quote is Titiana’s from The Readventurer. She echoes my feeling, or I guess I echo her feeling, that the story fails to think much about what it means to be human when you’re half machine, which is set up so that it could be a major Thing but really is not developed.

I must also agree that I felt the story lacked any particular Chinese flavor. A futuristic Beijing? It might almost as well have been a futuristic New York. Is this because cultures all over Earth got smashed so flat in WWIV? Not sure; we don’t find out much about the background of the story.

In fact, we don’t find out a lot of things. How long has a different culture existed on Luna, why are Lunars so very different from normal people, how did they come to have amazing psychic mind control powers, why exactly is Queen Levana so eager to take over Earth? No real clue about any of that.

Worse, the overall depth of the political situation is lacking. So Queen Levana wants to take over New Beijing? Well, why hasn’t she already done so? It doesn’t look like there’s anything anybody can do to stop her. Why do a slow conquest through a formal marriage contract? Why not just bring down troops and conquer the place? Especially since she and at least some of her people have super mind control abilities and could probably make Earth troops fall all over themselves to surrender. The political situation feels utterly glossed over to me.

Worse still, Prince Kai is so ineffectual. Maybe I’ve been spoiled by reading, I don’t know, THE THOUSAND NAMES by Wexler, but what is WRONG with Kai? You know what you do when the evil Queen Levana is actually visiting you in person as part of her campaign to marry you, kill you, take over your country, and enslave your people? YOU DO SOMETHING TO STOP HER. If you can’t think of anything clever, then how about something direct? She may have amazing mind control powers, but I bet a knife between the shoulder blades would seriously cramp her style. Since the evil queen has no heir, it sure looks to me like killing her would sow confusion among the enemy and might just stop the conquest notion right in its tracks. Seriously, no one even thinks of this?

Kai is not the only secondary character who baffles me. His primary political adviser gives such poor advice and seems to have Kai so much under his thumb that right from the beginning, I couldn’t help but wonder whether he was secretly working for Queen Levana. The mad scientist who apparently knows all about Cinder and Lunars and everything, WHY does he keep all that to himself for so long?

Moving on to the actual protagonist, Cinder herself. Lots of people love her, I know. I find her deeply, deeply frustrating. If I were reading a physical book, I would fling it across the room while shouting YOU FOOL, TELL HIM THE TRUTH! !!!! I would sound just like the Genie in “Aladdin.”

And, one more thing bothers me that I have not seen in other reviews, not that I’ve read them exhaustively. But. The writing. It is acceptable, I guess, but it is often awkward. I have said before that clumsy, clunky, awkward prose is highlighted by the audio format. That is the case here.

“She leveled Pearl with her own glance.”

From the context, clearly the author means the former, but got the sentence structure wrong. And one can’t level a glance at anybody, anyway, because a glance is too fleeting. One levels a stare at someone, not a glance.

This is not an isolated incident, btw. It’s just one where I happened to be able to remember the phrase till I got indoors and picked up a pencil. I find this kind of thing enormously off-putting when listening to an audiobook.

So . . . I have two sequels also in audio form. But it may be a good long while before I listen to them, though in the second book, SCARLET, Wolf sounds more like he might be my kind of character.