Now, now, listen, I never for a moment meant to suggest that anybody should start with CJ Cherryh by opening up any volume of the FOREIGNER series. No no no. That is a terrible idea, or at least terrible-ish. I think there are way better places to start. So, Kim and everybody else who finds it difficult to tell where to start with an author who has at last count about one zillion titles out there:

I see many of you suggest other non-Foreigner books to start with. I’m sure we won’t all agree, and in fact I know that for sure cause I already disagree with some of you:

Downbelow Station — Yes, it won the Hugo. No, it is a bad place to start. The cast of thousands thing that Mike mentions is the kicker. I think that makes it a tough book to get into for many people. I read it and I even enjoyed it, but it isn’t one of Cherryh’s that I go back to over and over. I do go back over and over to:

CYTEEN. Sure, you already understand the universe if you’ve read other related books such as Downbelow Station, but nevertheless CYTEEN stands alone perfectly well. Granted, when I re-read it, I skim lightly over the early part and start to really read it when Young Ari appears. So I would suggest that a reader be prepared to give the book some time to develop. Nevertheless, this is a tremendously effective, powerful story. New to Cherryh? If you’re into hard sociological SF, tackle CYTEEN and I hope you won’t be disappointed.

I did like Merchanter’s Luck a lot, but imo it seems a minor work compared to CYTEEN.

Rusalka trilogy — no no no. Not to say that some readers won’t agree with Elaine T’s daughter, who found this a good entry, but I loathed this trilogy and eventually gave it away. It is one of the few Cherryh works that absolutely does not work for me.

FORTRESS IN THE EYE OF TIME — yes yes yes. There are four books in the series, but this first one stands alone. In my opinion, if you are into fantasy rather than SF, this is one of Cherryh’s strongest fantasies. If you love it, great, read the next couple. I would personally suggest giving the last book in this world a miss. Don’t blame me if you read it and kinda wish you hadn’t. 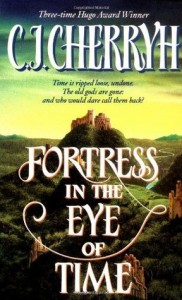 Other places to start with CJC:

CHANUR series — As long as a reader likes SF, then I agree with the lot of you, this is an excellent series. Go for it! It doesn’t even have 200 pages of intro before the story really starts. This is one where I really, really enjoyed the last book in the world, even though it is not really part of the series but rather a standalone companion book.

CUCKOO’S EGG — this short little SF novel is perfect in every way. Not sure you want to commit to a weighty tome or a series? Grab this one. It is out of print and not available in ebook form, but used copies are available for pennies, so pick one up and introduce yourself to Cherryh.

The same goes for “The Scapegoat,” a novella in ALIEN STARS, which is a deeply affecting story. If you want to try Cherryh with shorter works, or shoot, if you’ve just never seen a copy of this novella — do yourself a favor and pick up the anthology. Maybe you’ll even like the other stories in it, I dunno, I’ve forgotten them all, but “The Scapegoat” is absolutely beautiful.

Not a single one of those was my actual intro to Cherryh. I think that might have been Arafel’s Saga or maybe the Mri trilogy. But looking over my massive CJC collection, honestly, the above are the ones I would particularly point out as good starting places if Cherryh is new to you.

You may all now argue in the comments…

21 thoughts on “Where to start with CJ Cherryh”