So, how does Iain Banks’ far-future utopia-esque universe stack up next to The Golden Age trilogy by John C Wright? And how does it compare as a story?

Taking the latter point first: Wow, did I dislike the protagonist of A PLAYER OF GAMES. 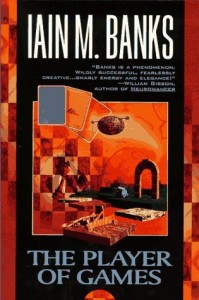 I disliked the protagonist for a long time, too; really, I never got to like him. At the beginning of the book, Gurgeh is shallow, petty, and sometimes cruel. Worse, he lacks integrity. He’s going to be used to bring down a horrible empire (and believe me, it is quite horrible), but he has to be blackmailed into participating and even then he doesn’t know what is actually going on. No one tells him the truth about The Plan because . . . well, that wasn’t clear to me. But it gives us an interesting situation where Gurgeh is extremely competent at this one thing, the game; but he is acting as a puppet of the Minds of the Culture and so he is not taking *deliberate* action to drive the underlying conflict. A protagonist who is actually a puppet is kind of . . . how can you admire this guy?

This is an interesting point from a writer’s perspective. I have seen several books lately where the protagonist did not know what was really going on until the end. Ice Cream Star comes to mind, for example, and now we have this story, completely different in practically every way but similar in this one respect. I thought withholding the truth from the protagonist – and the reader – worked a whole lot better in the former. I know exactly why Pasha lied to Ice Cream – because if he had told her what he was really trying to achieve, she would never have cooperated. But the reader is invited to really get invested in Ice Cream Star. She was very active in trying to protect other people and do the right thing all the way through, even though she had no idea what was going to happen and all her efforts crashed and burned. She feels like a real person, you get attached to her. When she sees something horrible, she is profoundly affected, sometimes to the extent of doing something really stupid, but definitely affected.

It’s different for Gurgeh. Banks holds his protagonist at a peculiar distance from the reader. Gurgeh’s affect seems strangely flat most of the time. There are times when he probably has a more extreme emotional reaction to some awful thing, but this is not apparent. To take one trivial but telling example, when the mother animal has her cubs shot in front of her and they scream and she turns back to them and gets shot and dies . . . nothing. Nothing at all. The reader is not given any insight as to Gurgeh’s reaction, if he had one. There are quite a lot of moments where Gurgeh sees something terrible and we infer he was affected, but really, there is not much evidence of it.

Also, truly, I am not clear on exactly why the Minds of the Culture did not tell Gurgeh what they hoped to achieve. I would sort have thought that telling him might have made him really commit to the goal earlier. Maybe they thought it would distract him from the game? But my impression was that well before the endgame he’d reached a state where nothing, absolutely nothing could distract him – and that the Minds who were arranging all this knew that. But Gurgeh’s ignorance of the actual plan and goal also made him a less sympathetic character, because as far as Gurgeh knows, nothing he’s doing is actually important and he’s not really in any danger, so he never gets a chance to deliberately risk his life in a noble cause. His overall character arc seemed surprisingly flat to me. I mean, at the end of the book, he still seems petty and shallow and I’m not sure he even seems very much affected by what has happened. We’re told he’s tired and so on, but he seems mostly the same when he gets home.

Anyway. I didn’t actually dislike the story. But I didn’t really like it much, either.

The writing: Just okay for me. I wouldn’t say the quality of the writing particularly stands out one way or the other. It’s not great, it’s not awful, the dialogue isn’t especially snappy, the phrasing isn’t especially clunky. It’s okay. The game itself, and the play, is described in terms that make it all seem realistically complicated. It feels right. That must have been difficult to pull off, with such a massively complicated game.

The setting: Nothing like as ornate as Wright’s. Much more familiar and for that reason, perhaps, less believable. People really haven’t changed all that much over the past tens of thousands of years; your typical experience of life hasn’t necessarily changed all that much. Sure, everybody is stupendously wealthy because of essentially unlimited resources, but people carry terminals that feel a lot like smartphones; people live in orbitals that seem indistinguishable from worlds; people have redesigned their biology but mostly not in ways you’d notice. After Wright’s trilogy, this seemed rather unbelievable.

The one significant biological difference in Banks’ universe is “glanding” – having special glands in your body, so you can consciously control your internal endocrine system. This doesn’t come close to the wild and wacky things people do with their bodies and their consciousnesses in Wright’s trilogy, but at least it’s an important difference.

The AIs are kind of similar in the two stories, though given the tonal differences between the two works, one is not totally shocked to observe that Wright’s most important AIs are more interesting, more sympathetic, more opaque and harder to understand, and just a lot nicer than Banks’ rude, unpleasant drone, which is exactly like a rude, unpleasant human character, except tiny and able to fly and so forth.

The characterization: Oh, it was okay, I guess, but there wasn’t a single important character I actually liked. I don’t see how anybody could really get invested in the fate of any of the important characters. I could have gotten invested in that poor girl who was going to be a player but was deliberately washed out because girls aren’t supposed to be good at the game. There’s a situation I can sympathize with. She only appeared in one brief scene and then Gurgeh doesn’t even remember her name later; we never see her again.

Also, Banks chose to make his tri-sexed alien species – don’t get me started on why three sexes are not actually at all likely to evolve – anyway, he chose to make them humanoid and then give them styles to match historical European styles, so that individuals of the sex referred to as “female” (they aren’t really female as they don’t product gametes; they gestate the young, though, which are passed to them from the true females . . . never mind) wore elaborate gowns and the male sex wore trousers. And those two sexes got very typical social roles, too. Amazing how this alien species conformed so closely to historical European human behavior even though it has three sexes and all that.

The plot: I suspect the reader has a better idea of what is going on and what is going to happen than the protagonist. In some stories, this can add to the reading experience I am not sure it was a plus for this one.

The scope: This world felt smaller than Wright’s even though it was actually bigger. This may have been due to the ordinary-seeming environments we are frequently shown and the compression of journeys that took years into relatively short sections of book-time.

The themes: While it is nice to pull down horrible empires and give people a chance to build better lives for themselves, it would be even nicer to do it on purpose because you’re committed to that goal, rather than accidentally because you have no idea what’s really going on.

The utopia: I must admit, this world is less scary than Wright’s because it feels so much more familiar.

In Banks’ world, the risk of dissolving your individuality into a mass mind and never getting it back again appears to be zero.

The chance of redesigning your consciousness and personality into a structure that makes you into a completely different kind of person: zero.

The chance that you will create a completely nonhuman body for yourself, download your consciousness into it, and then find your new body’s environment more restricted than you’d hoped: zero.

The chance of splitting off a partial copy of your personality and finding out you have accidentally created a new person for whom you are now responsible: zero.

The risk of plunging yourself into permanent dreams so that you will never wake up: I dunno, hard to assess, but at least we never hear of anybody doing anything of the kind.

Practically everything about Banks’ universe and the human people in it seems pretty familiar and fairly bland. It looks like it would be a fabulous place to live, and feel pretty much like current life except without limited resources. Sign me up! But I don’t find it particularly persuasive and I don’t really see how it could be stable without re-tooling human nature quite a bit. Maybe in his other books in this series, we find out more about the actual design of this utopia and why we don’t get competing philosophies creating wars and so on.

If you’ve read this, what did you think?

5 thoughts on “Recent Reading: The Player of Games by Iain Banks”