Recently I saw a list someplace of “most intimidating books.” Interesting topic, I thought, but I didn’t make a note of the link, so who knows. Anyway, that’s probably an approximately infinite list depending on what people happen to find intimidating, so here instead is a list of what I think might count as the most intimidating books that are actually (mostly) on my shelves, by category.

By “intimidating,” btw, I mean either I think lots of other people would find them so even if they kind of wanted to read them, or that *I* find it intimidating to think of reading or re-reading them.

1. Most intimidating classic I have on my shelves but have never read: Malory’s Le Morte d’Arthur. I always find classics intimidating, especially if I ever saw them assigned in class in high school or college because that makes me feel like I would probably hate them even if I was never actually forced to read them myself.

If I happened to read a particular classic without thinking of it as “one of those horrible things teachers are always assigning,” it didn’t get tarred with that brush even if I saw it assigned later. I’m thinking here of The Count of Monte Cristo, one of my all-time-favorite books.

Anyway, I somehow never feel like picking up Le Morte d’Arthur even though there is no rational reason to feel intimidated by it. I mean, it’s long. But I read long things all the time. Maybe I should bring this one upstairs now so I can alternate it with various nonfiction works for a while.

2. Most intimidating classic I have on my shelves that I have in fact read: the unabridged Les Miserablesby Victor Hugo. I read this after seeing the play for the first time. The play is SO GOOD. When I see a great movie or play and there is a novel version, I always want to read the novel. Sometimes I am disappointed (The Hunt for Red October was actually a lot better as a movie than a book), but usually if I loved the visual version, I love the novel version even more.

But there’s no two ways about it: Les Mis is one huge doorstopper of a novel. It’s intimidating in a way that no shorter work could possibly manage. 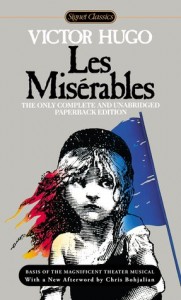 3. Most intimidating classic I do not have on my shelves and do not expect to read: Ulysses by James Joyce. Seriously, experimental literary fiction that’s deliberately written to be opaque + huge doorstopper = not likely.

4. Most intimidating nonfiction, memoir: Memoir and fiction are pretty much identical as reading experiences, but knowing the story really actually more-or-less happened makes it more less approachable, at least if the story being told is grim. My pick for intimidating memoir on my shelves isAcross Many Mountains by Yangzom Brauen. I haven’t read this yet, though I certainly will eventually. It’s the story of three women who made it out of Tibet after the Chinese crushed Tibet’s native culture. It’s going to be grim, grim, grim. But ultimately at least some of the women did make it out and built a new life for themselves. I’m sure it took plenty of luck as well as sheer grit. 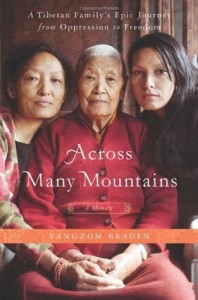 5. Most intimidating nonfiction, cookbook: Ah, you are probably saying that it’s impossible for a cookbook to be intimidating, aren’t you? Wrong! I have here beside me the four-volume Larousse Gastronomique: Meats, Fish, Vegetables, and Desserts. As an in-depth look at classic French cuisine, it is wonderful. As a guide for a novice, cook, it is dreadful. Here is an actual recipe from the Dessert volume:

Butter a charlotte mold. Line the bottom and sides with a layer of cold milky rice pudding to which an egg yolk and a stiffly whisked egg white have been added. Fill the mold with a well-reduced apple puree. Cover with a layer of rice pudding and place the mold in a bain marie. Bring to a boil on top of the stove and then place the bain marie in a preheated oven at 425 degrees and cook for 40 minutes. Turn out onto a serving dish and coat with a hot blackcurrant sauce.

Now, this actually sounds good and I’m inclined to try the recipe sometime in the near future. But: a “milky” rice pudding? How “milky”? More “milky” than usual? How exactly are we to make the rice pudding – this absolutely can’t mean the kind of baked custard rice pudding my mother makes. I believe it is the kind you make by cooking a cup of rice in, say, four cups of milk and 2 cups of water for about forty minutes, until the rice is very, very soft and the pudding is quite thick – it will thicken even more on chilling and might actually be too stiff for this use. Even if I’m right, though, would that make enough rice pudding for this charlotte? And would you cook the rice in 6 cups of milk in order to make sure it’s “milky”? Or would you add more milk at the end of cooking? If you did, how much milk would you add?

When you say “a well-reduced apple puree,” what does that mean? Applesauce? Reduced applesauce? How thick do you need the applesauce to be? If you started with ordinary canned applesauce, is that thick enough or do you need to reduce it? How many cups should you start with and how many cups should you end up with after reducing it, and about how long should reducing it take? Is applesauce particularly prone to burn or would it be okay to reduce it over a medium-high heat to get it done faster?

A bain marie is a water bath. They probably mean that you should put an inch of water in a 13 x 9 inch pan and set the charlotte mold in that, but they sure don’t say so, do they? Often one heats the water not by bringing it to a boil on the stovetop but by putting the water in the dish and setting the dish in the over to preheat while you make the recipe. Would that work? Because it would be easier.

I note that no recipe is given for making a blackcurrant sauce. If a recipe is offered later elsewhere in the cookbook, there’s no note to let you know about it. Checking the index, I see no such recipe.

The recipes are in strict alphabetical order, by the way, so various related dishes are scattered around depending on whether you’re talking about an apple charlotte or a peach charlotte. Not to be judgmental, but this organization is frankly ridiculous. Also, there are no chatty notes involving the history or the wonderfulness of the dishes, either, which are ordinarily so important in making you want to try the dish. And there are no pictures. This is definitely, but definitely, not a cookbook for amateurs.

6. Most intimidating nonfiction in what I still think of as my field: The Structure of Evolutionary Theory by Steven Jay Gould. Everyone thinks of SJG as a popularizer, which he was. However, Gould was also important in setting the direction of the various academic discussions that have been important in the field over the past, what, forty years or so? This massive 1300 pp tome (not counting bibliography or index), published in 2002, pulls together every important thread in the whole discipline as of the turn of the century. Gould covers (thoroughly) the classic underpinnings of evolutionary theory: that natural selection works at the level of the organism; that it is by far the most important mechanism of adaptive evolutionary change; and that evolutionary changes are incremental. Then he lays out the most important critiques of that classical conception: that selection operates on multiple levels, from the gene to the group; that natural selection is not the only important mechanism driving evolution; and that evolutionary changes can be fast and drastic. It’s just an amazing work.

My favorite comment at Goodreads, currently at the top of the list of comments, is: I would like to clock Richard Dawkins on the side of the head with this book. Me, too, Erik! I have never been a big Dawkins fan.

Anyway, I sure wouldn’t suggest it for a nonacademic reader who just wants to know something about the theory of evolution. For that, a much less intimidating and far less academic work, like, I don’t know, Evolution by Carl Zimmer is as good as any and better than most. Or really anything by Zimmer. Plus you could read five of Zimmer’s books in half the time it’d take you to wade through SJG’s tome.

7. Most intimidating nonfiction, other: the Culture trilogy by Thomas Sowell: Conquest and Culture, Migration and Culture, and Race and Culture. Sowell is technically an economist, I guess, but really he is a sociologist, too. Also, he is an extraordinarily gifted writer who can make anything readable, though of course sociology is inherently interesting. But this is a long, dense work.

It is also very important for me as background for building worlds and societies, and for understanding how other authors do the same. When I’m impressed by how, say, Sage Blackwood worked out the political and social background for her Jinx trilogy, or struck by the implausibility of the empire in, say, Carol Berg’s Transformation trilogy, this owes a lot to Thomas Sowell’s giving me a basic understanding of how societies actually are put together and behave.

8. Most intimidating SFF work on my shelves: I have a hard time imagining many new readers tackling CJC’s immense Foreigner series. It is just so big. And the entire first book is introductory, with both the protagonist and the reader in the dark about what is going on. It’s such a wonderful series, but . . . yeah, simply intimidating in a way that, say, Brust’s Taltos series just is not.

9. Most intimidating SFF work on my TBR shelves: Iain Pears’ An Instance of the Fingerpost was recommended in the most vehement terms by a couple of authors at some convention or other. I think Jo Walton might have been one of them, but I don’t honestly remember for sure. But that’s why I added it to my shelves. However, it’s fairly long and looks pretty literary and although I’m pretty confident I would like it, I must admit that I am a bit disinclined to actually pick it up and read it. So often I would prefer something familiar or lighter or quicker to read. The next Ilona Andrews book, say. I think Pears’ book has been on my TBR shelves for a couple of years so far and there’s not much chance of it moving to the main shelves any time this year, either. 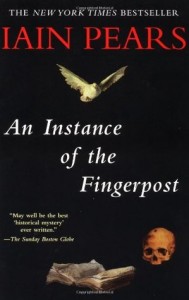 Okay, can I make it to ten? What’s another reasonable category?

10. Most intimidating historical series on my shelves: The Niccolo series by Dorothy Dunnett. Elaine T commented on a post a day or so ago that some readers prefer it to her Lymond series, but for me . . . well, it’s longer and slower than the Lymond series, and even grimmer things happen during the course of the series. I stopped for an entire year after one particular moment at the end of, I don’t remember exactly, maybe the fifth book. I mean, the series ends well, eventually. But, wow. Plus it’s just so massive. I’ve only ever read it straight through once. I’ve read the Lymond series several times. So I can’t help but feel the Niccolo series is more intimidating.

4 thoughts on “Most intimidating books on my shelves”